There aren’t many jobs where you can consistently misinform, manipulate and exploit your employers and get rewarded for it. But following his speech at the Sydney Institute last week, Human Services Minister Alan Tudge joined this coveted club. Considering that the Minister is directly responsible for the wellbeing of half of Australian households, this is a frightening development.

“We must face the reality that in our desire to be a generous and caring society we may have reached a point where we have taken our good intentions too far, and are now causing harm”, he said.

Tudge quoted an array of facts and figures that suggested that lazy and work-shy unemployed Australians are taking advantage of the Coalition’s overly generous approach. Giving job agencies and Centrelink new powers to financially penalise unemployed workers was presented as the only real solution.

Tudge: “There are more than 400,000 capable people who are not subject to any work-related mutual obligations in exchange for their payments.”

To receive the dole, unemployed Australians must attend between one and 12 job agency appointments each month, apply for up to 20 jobs, participate in a range of training programs, and when eligible, attend Work for the Dole (or an approved-Centrelink activity) for up to 50 hours a fortnight for six months at a time.

Unemployed Australians living under the Community Development Program – 80 per cent of whom are First nations people – are required to Work for the Dole all year round. Those who do not meet these requirements may have their income support suspended or reduced.

The Coalition contracts around 50 privately-owned companies to administer this employment services system at a cost of just under $3 billion per year. To put that figure into perspective, this financial year the Coalition will spend $10.45 billion – a tiony fraction of our 1.5 trillion dollar GDP – on income support for unemployed Australians.

Of the 880,606 Australians currently attending an employment service, government data indicates that only 106,805 have received a temporary exemption from meeting their requirements – roughly 300,000 less than Tudge claimed. The Department of Human Services did not respond to New Matilda’s query regarding the origins of the mysterious 400,000 figure.

Tudge: “Only about four percent of those who fail to undertake a required activity without reasonable excuse receive a financial penalty.”

According to the Coalition’s own job seeker compliance data, during the 2015-2016 financial year 261,529 financial penalties were imposed on unemployed Australians. On average, this means that three out of every 10 unemployed workers faced a financial penalty – a rate 7 times higher than Tudge claimed. It’s possible that they’re fining the same people multiple times, but not that many times. Far from Australia being too lenient on its unemployed citizens, the data reveals a society that has become unconscionably cruel and punitive in its dealings with those without work.

Since the Coalition was elected three years ago, the number of financial penalties imposed on unemployed workers has increased 20 per cent and the number of payment suspensions has increased a staggering three and a half times. Stories of job agency abuse have become commonplace, while complaints against agencies have reached unprecedented levels. The industry is in chaos. The Coalition’s solution? Serve up rubbery figures to support yet another crackdown on the unemployed and hope nobody asks any questions. New Matilda is still waiting to hear from the Department of Human Services how Minister Tudge arrived at the 4 per cent figure.

Tudge: “We will always proudly have a generous social security net”

Australia currently spends 9.2 per cent of its GDP on social security cash payments – 3 per cent below the OECD average. Our unemployment entitlement – currently just under $400 below the Henderson Poverty Line – is the second lowest in the OECD.

Shockingly, all income support payments in Australia sit below this poverty line. Since the Coalition took office three years ago, the average unemployment rate has actually increased to around 6 per cent compared to 5.1 per cent under the Gillard and Rudd Labor Governments. How then can the Coalition boast about increasing the number of jobs by almost half a million?

The simple answer is that the Coalition has presided over the largest increase in part-time employment as a proportion of the labour force ever recorded. Of the 470,000 Australians employed over the past three years, more than three quarters were employed on a part time basis (defined by the ABS as working between 1-35 hours per week). As a result of this explosion in underemployment, the average hours worked per adult per month has decreased from 88.25 in 2013 to 84.66 today. 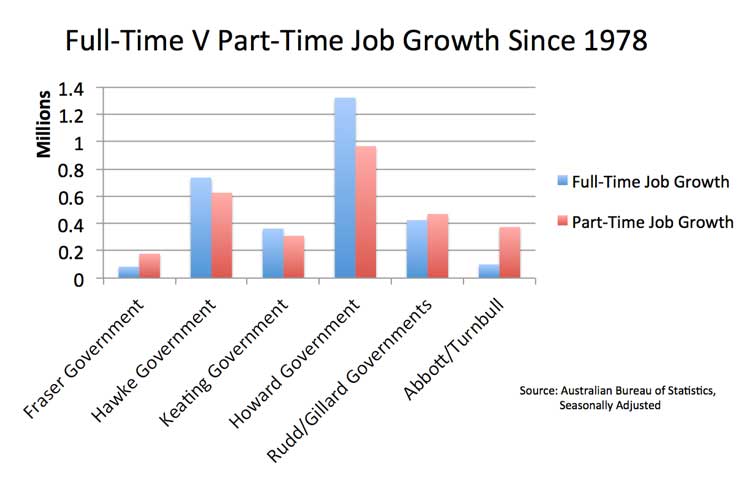 Since records began, no Australian Federal government has witnessed this kind of collapse of the full-time labour force. However, instead of responding to the crisis – which has led to 19 job seekers competing for every job vacancy – the Coalition has cynically distorted this increase in part-time employment to bolster its employment figures. No wonder a former ABS chief stated recently that ABS figures “are not worth the paper they are written on”.

Tudge: “We might look at a heavily welfare dependent community and see impoverishment. But we could double the payments, and that impoverishment would not diminish.”

This statement perfectly encapsulates the Coalition’s approach toward social security. For Tudge, it is not the Government’s low rate of income support payments that cause impoverishment – poor people do. No increase in social security payments can compensate for the poor’s inherent inability to make rational choices and act in their own interests. The role of government, therefore, is not to provide direct assistance to the poor, but rather to introduce coercive policies that force them to help themselves out of poverty.

Margaret Thatcher would be proud.

This is the quintessential neo-liberal approach – not only does it allow the Coalition to blame its own failures on poor people, it also paves the way for big business to exploit the growing desperation of the poor in the form of lower wages and conditions.

Unfortunately for Tudge, once again his Government’s own statistics debunk his rationale for this approach. According to ACOSS poverty reports, the declining rate of income support payments seen over the last three decades is one of the leading causes for Australia’s rapidly increasing poverty rate.

As a result, it is commonly argued that increasing income support payments is the most effective way to decrease poverty in Australia. Not exactly rocket science.

However, as it does not fit neatly into the Coalition’s wider neo-liberal political agenda, it is simply ignored.

The misinformation being fed to the Australian public by Minister Tudge is not your ordinary case of a politician playing fast and loose with the truth. What makes this far more frightening is that these statements are coming from a Minister who is directly responsible for the wellbeing of half of Australia’s households – that’s more than 10 million people.

By misleading the public to support the government’s long-standing desire to subject the unemployed to an unprecedented array of cruel and unusual punishments, Tudge is setting a dangerous precedent that will make it easier for Ministers to lie and manipulate their way to any policy objective regarding social security recipients – no matter how inhumane or abhorrent.

The battle lines have been drawn. So what are we going to do about it?