The debate around the Australian social security system has sunk to a shameful new low. This should not be taken lightly, writes Owen Bennett.

While no concrete plan was announced (the Coalition will pay private companies $96 million to help it do that), the Minister noted that the Turnbull Government would be particularly interested in “novel and brave” ways to increase the requirements placed on social security recipients.

To get the ball rolling, Porter revealed that the Coalition has been considering linking parents’ social security to their children’s school attendance. In an ominous sign for the 50 per cent of Australian households receiving some kind of social security payment, the Minister noted that this tough approach could be applied to a “range of measures”.

Drug and alcohol tests were not ruled out.

Porter’s message was clear: the Coalition wants Australians to work harder than ever before for their basic right to social security. Those who don’t – or can’t – will be ignominiously branded as “undeserving poor” and left for the NGOs and charities to deal with.

Despite Porter’s best effort to present the Coalition’s policy agenda as ‘revolutionary’ and ‘data-driven’, his speech actually signalled a return to the ‘bad old days’ of the 1930s.

In this period, Australians who applied for charity relief were subject to an invasive examination to determine their character and morals. Neighbours, local shopkeepers and police were routinely questioned. No doubt, any applicant that was found to use recreational drugs or allow their kids to skip school would struggle to convince the examiners of their ‘worthiness’.

Over the proceeding 85 years, this approach has been discredited as an effective way to help people out of poverty. Is this really the type of system we want to return to?

They argue that the Coalition’s proposal to tackle welfare dependency will “empower” the growing number of Australians “addicted” to social security and, ultimately, usher in a new era of “individual freedom” that will help the poorest people into work.

Shamefully, not one of these experts have bothered to ask how the Government will make sure there will be enough jobs to accommodate the “welfare addicts” the system spits out into the labour market.

There is a reason no-one has asked this question – if they did it would expose the inconvenient truth that Australia is currently in the midst of an employment crisis.

Adding the 1.82 million Australians looking for work, the most recent ABS data indicates there are a further 1.34 million ‘hidden unemployed’ who are not considered part of the workforce but are also looking for work.

That’s just over three million Australians who are currently looking for work. Can they all be ‘leaners’, ‘dole bludgers’ and ‘job snobs’?

Put together, this means that going by the government’s own statistics there are 19 job seekers competing for every job vacancy in Australia – a 50 per cent increase since 2011. This ratio will surely increase when the Australian car industry shuts down in 2018, which Labor estimates will place 200,000 Australian workers at risk.

How is the Australian labour market meant to support social security recipients when it is comprehensively failing to provide for those already in the workforce? 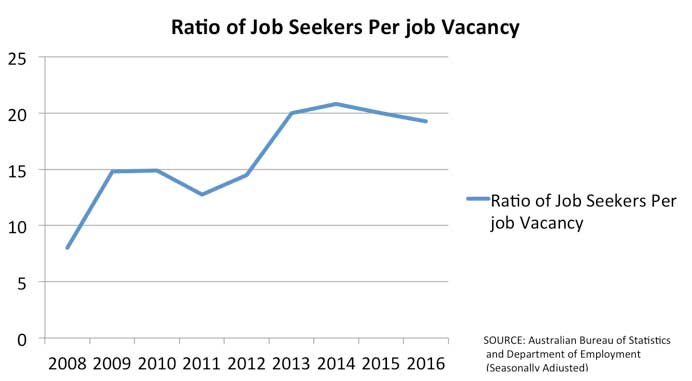 No wonder the average time spent on Newstart – a payment that is $392 below the Henderson poverty line – is over 4 years.

This is where the Coalition’s plan to break ‘welfare dependency’ starts to resemble a vicious Malthusian attack on Australia’s most poor and vulnerable – much to the apparent delight of conservatives in the media.

Instead of focusing on creative new ways to force poor and vulnerable people off social security, why isn’t the Coalition addressing our growing employment crisis?

The answer is simple: the Coalition knows that as soon as it acknowledges Australia’s employment crisis, the pernicious myth of the ‘dole-bludger’ (first initiated by Labor Treasurer Clyde Cameron in 1974 and perpetuated with gusto ever since) would collapse.

Who then will the Government ‘crackdown’ on to fix the ‘budget emergency’?

Who then will the Government use as a policy tool to ensure a massive over-supply of labour designed to drive down wage growth and union membership?

Who then will the Government use to distract people from its spectacular failure to create enough work to go around?