Forget the Turnbull Government’s ‘budget repair’ dogma. The real reason the Coalition is trying to cut the dole is to further undermine job security and the power of workers, writes Owen Bennett.

The nature of the Australian labour force has changed drastically in a very short time. In the late 1970s, eight in 10 workers had full-time jobs. Today, only 65 per cent of workers are considered to be in full-time work. Jobs are now increasingly casual (currently 20.1 per cent of the labour force according to the ABS), part-time, or subcontracted. 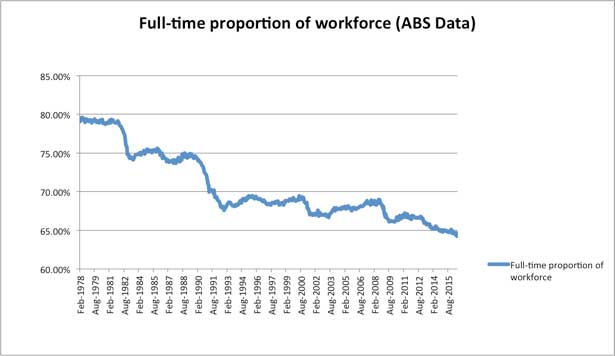 How did this happen?

Rising unemployment, declining trade union strength and the automation of work are often blamed for the rapid decline in full-time jobs. But there’s more to the story.

An increase in unemployment does not necessarily lead to a corresponding rise in casual work. According to the early advocates of the welfare state, the casualisation of the labour force can be avoided through the provision of an adequate social security system. To ensure unemployed workers were not pressured to accept insecure work, proponents of the welfare state argued that adequate government unemployment entitlements were essential.

As noted by one of the most celebrated architects of the welfare state, William Beveridge, the social security system was in part designed to tackle the growing casualisation of the labour force in the pre-war period. So strong was Beveridge’s commitment to ‘decasualise’ the labour force, he was even prepared to let unemployment increase if it meant more full-time positions.

“In making work more regular for some…it throws others out altogether,” said Lord Beveridge. “The avowed object of decasualisation is to replace every thousand half-employed men with five hundred fully employed men”.

For Beveridge, providing adequate income support for those forced out of work was a crucial part of decasualising the labour force.

How things have changed.

Australia is a classic example.

The election of Malcolm Fraser in 1975 began a period of sustained attack on the unemployment entitlement. By abandoning the Whitlam Government’s commitment to index the dole to average wages (rather than the considerably lower consumer price index), Fraser paved the way for decades of stagnation of the dole.

To understand the significance of Fraser’s indexation changes, it is helpful to compare the dole (indexed to the consumer price index) to the Disability Support Pension (which Fraser indexed to average wages in 1979-80). As a result of this indexation change, the dole plummeted from 3 per cent below the Disability Support Pension (DSP) in 1979 to 40 per cent below today. 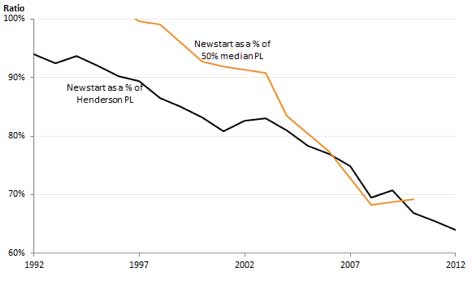 As it became harder to survive on the dole, unemployed workers were under increased pressure to accept insecure work to supplement their insufficient entitlement. Australia’s massive oversupply of labour (there are currently 18 job seekers competing for each listed job vacancy), combined with the low rate of the dole, has left many unemployed workers trapped in a cycle of poverty and insecure work.

Employers have been quick to take advantage of the growing desperation of unemployed workers. Full-time jobs were increasingly broken up into multiple casual, part-time and subcontracted positions. Today, this trend shows no signs of abating – only 14 per cent of the total net jobs created over the last 12 months were full-time.

In stark contrast to the original objectives of the welfare state as outlined by Beveridge, the unemployment entitlement has developed into a tool to ‘activate’ the unemployed as a source of labour supply. The increasing requirements and sanctions imposed on unemployed workers by the punitive employment services industry is similarly utilised to this end.

The Coalition’s proposal to abolish the energy supplement and the income support bonus (for a total loss of $430 per year for the unemployed) is part of a deliberate strategy to further increase the casualisation of the labour force.

If the Labor Party backs the cut to the energy support supplement (they have already supported the abolition of the income support bonus), not only would it lead to the first real decrease of the unemployment entitlement in Australian history, it will also lead to more full-time jobs disappearing from the Australian economy. 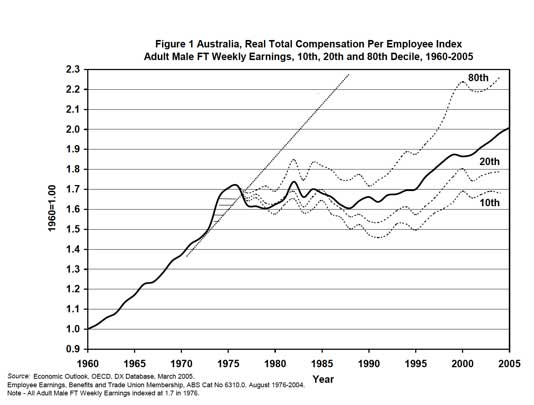 The trade union movement has for decades been playing catch-up to this neo-liberal strategy of cynically ‘activating’ the unemployed to engender an oversupply of labour. Confronted with the resulting rise of casualisation, trade unions have struggled to maintain their relevance and membership has sharply declined. Today a record low 15 per cent of the labour force is a member of a union – down from 55 per cent in the late 1970s. As a result of this declining strength, real wage growth has been stagnant for decades and is currently at a record low.

Recently, the Australian Unemployed Workers’ Union signed a joint statement with the Australian Council of Trade Unions demanding that the Government adopt a more human approach toward unemployed workers and social security recipients.

While this is a great start, there is lots of work still to be done. Unless the trade union movement as a whole drastically alters its approach and starts fighting for the rights and dignity of unemployed workers, full time work will disappear, and along with it, the relevance of unions.