New Matilda has 13 Double Passes to Spotlight to give away to New Matilda paid subscribers (sorry readers, unless you take out a paid sub here, you can’t enter for our giveaways!)

For paid subscribers, read the screed below, and then email us here in 25 words or less why you think Spotlight is a film you’d like to see. Winners will be announced on Thursday evening.

Spotlight, due to open in cinemas January 28, tells the riveting true story of a team of Boston Globe journalists who exposed one of the biggest cover-ups in modern times.

A brilliant ensemble cast including Mark Ruffalo, Rachel McAdams and Michael Keaton portray the Spotlight team, a group of dedicated investigative reporters working at the Boston Globe, in this cinematic love letter to long-form journalism.

At the suggestion of their new editor Marty Baron (portrayed in the film by Liev Schreiber), the team delved into abuse allegations against the Catholic Church, fully aware they were taking on the most powerful institution in the city. What they eventually uncovered was a shocking citywide scandal involving the highest levels of Boston’s religious, legal and government establishment. 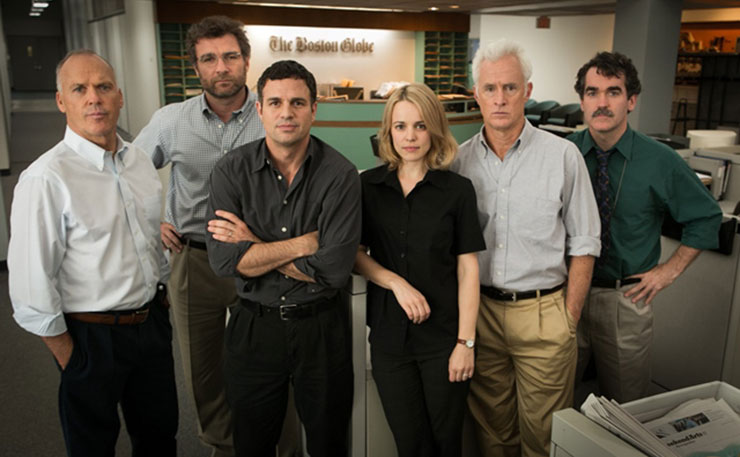 Although isolated cases of sex abuse by Catholic priests had been reported prior to the Spotlight investigation, the team’s in-depth, scrupulously fact-checked expose revealed the scope of clergy-perpetrated crimes – and the Church’s involvement in protecting their clergy from the criminal justice system – with never-before-seen precision.

Breaking the story in 2002, Spotlight’s efforts would earn them the Pulitzer Prize in 2003, setting off a wave of revelations globally and causing a crisis in one of the world’s oldest and most trusted institutions.

Like All The President’s Men before it, Spotlight will hopefully inspire a new generation of journalists as it celebrates the virtues of investigative reporting during a period when many fear that long-form journalism has taken a backseat to 24 hour news cycles, celebrity gossip and sensationalised internet “click-bait”.

Thrilling, intelligent and wholly captivating from start to finish, Spotlight has received overwhelmingly positive critical and audience acclaim internationally. Tipped as a favourite in this year’s Oscar race, this masterful film deserves the hype.

You can watch the trailer here.