New Matilda has launched a mini-fundraiser – the first of several which are aimed at both securing the future of the site for another year, and taking our reporting to the next level. Chris Graham explains.

Australia is in no position to lecture the world about climate change.

We’re one of the worst carbon polluters on earth per capita; we’re the only nation on earth to actually abolish an emissions trading scheme; and Malcolm Turnbull – the man who said he would die in a ditch in the fight to tackle climate change – has just approved a coal mine in the Galilee Basin that will pump out four times the carbon emissions of New Zealand in a single year. And we’re definitely the only country on earth who had a minister and prime minister laugh about the affects of climate change on small Pacific Islands at a public meeting.

In short, as a nation, our inaction on climate is pretty disgusting.

The Paris Climate Talks are a gathering of world leaders to try and nut out a deal which limits global warming of to 2 degrees… ie. they’re meeting to determine the future of the planet.

Basically, we want to go to Paris to try and help keep the bastards honest… our bastards, and all the other bastards. We’ll be the only genuinely independent Australian media outlet there, and one of the only independent outlets in the world. 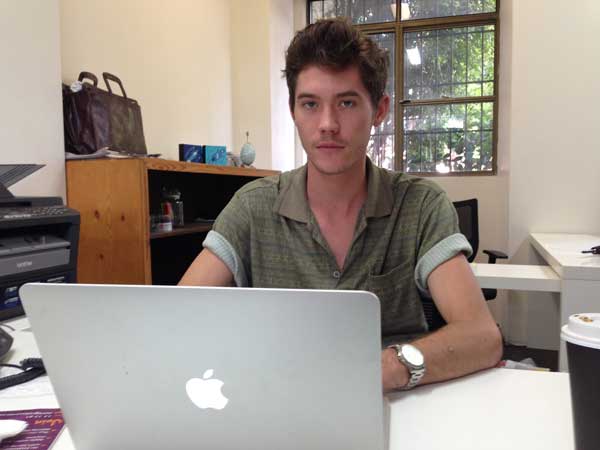 Thom Mitchell has worked hard this year to bring you important environmental news as it happens.

In the course of his first year in reporting, Thom has revealed that Whitehaven Coal had a ‘phantom greenie’ on a key environmental panel; he’s pursued the Carmichael Coal Mine relentlessly; and last month Thom’s deft use of FOI documents revealed that a major port expansion on the Tiwi island done without any environmental approval was a combination of government bungling, and suspicions of deceit on the part of the port developers (that story is ongoing by the way – Thom broke a fresh angle on it yesterday, regarding local concerns about plans by the US military to use the port. And a new FOI story is scheduled for early in the week).

And we’ll sweeten the deal a little – readers who contribute will receive regular email ‘insider’ updates on what’s happening behind the scenes. This is a service only available to people who contribute to this fundraiser. There’s additional goodies for high-level supporters as well.

NOTE: Our Paris Climate Talks fundraiser is the first in a series of mini-fundraisers we’re launching to help take New Matilda to the next level. Our goal is to raise at least $200,000 by Christmas 2015 on a series of specific projects, thus helping to secure the future of New Matilda for another year. More details next week.