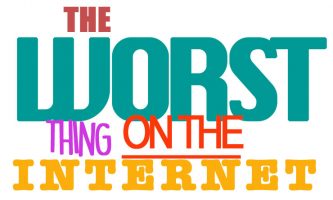 The Worst Thing On The Internet is a regular New Matilda column, which documents humankind’s slow but inexorable drift towards stupidity and, ultimately, extinction.

As nerds go, Youtuber Mark Roper – a former NASA scientist who worked on the Mars Rover project – is a big one. So big, in fact, that he’s the sort of nerd other nerds would bully. But he also happens to be quite famous. And very rich. Which means he has an almost Elon Musk-esque ability to drape himself in whatever vanity projects take his fancy… as we’re all about to find out.

Rober’s exact worth is hard to know, but you can rest assured that via Youtube alone, he routinely earns a year’s salary in about a week. But his reach is public knowledge: every video Rober posts goes to almost 23 million potential subscribers, and his channel, which has more than 100 videos, has already attracted just over 3.1 billion views.

To give you some context, a high rating show on Australian television might attract half a million viewers. Our highest rating television event of all time – the 2005 Australian Open tennis final – attracted an audience of just over four million people. Which means that any hour of any day of the week, Roper can reach almost six times as many people as the highest rating event since television came to Australia almost 70 years ago.

Long story short, Mark Rober has a lot of money and a LOT of reach. And so how does he use this mind-boggling influence and capacity for change?

Well, if the video Rober posted two days ago is any guide – and spoiler alert, it is – then he’s pissing his influence up against the wall.

The project is entitled, “Egg Drop From Space”. And as the name implies, that’s literally what he sought to do… Rober spent God knows how much money, plus three years and significant resources working to drop an egg back to Earth from outer space, without breaking it.

Cue the crickets… and the starving children in South Sudan, Ethiopia, Nigeria and Yemen, many of whom didn’t have access to Youtube or… well… eggs while Roper was working diligently to advance the science of… f**k knows what.

Other videos on his channel include, SKIN A WATERMELON Party Trick, World’s Largest Jello Pool, Glitter Bomb 1.0 vs Porch Pirates (which has 88 million views), and Backyard Squirrel Maze (which has 106 million views).

In other words, Rober is the King of Fluff, posing as the harmless science nerd, who’s literally wasting an extraordinary capacity to actually do something meaningful.

In Rober’s defence, he’s worked with Mr Beast, another popular Youtuber, to raise money for environmental causes. And Rober is, undeniably, far less offensive and puerile than say, a Jake Paul (another Youtuber who humanity is collectively waiting for some terrible accident to befall him).

Regardless, Rober should know better, and while he’s generally benign and one of the least offensive things on the internet, today his ‘Egg Drop From Space’ video – for reasons of pure waste and mindless ego – is ‘The Worst Thing On The Internet’.