Media ethics can be a difficult beast.

On one hand, if you pay attention to people like Pauline Hanson, you provide an audience for the racism they peddle. On the other, if you ignore them completely they avoid the scrutiny all public officials – especially the ones calling for certain minority groups to be targeted – need to face.

Over at Channel Nine’s Today Show they don’t seem overly concerned about the whole ‘ethics’ thing.

The show has been more than happy to ride off Hanson’s bigotry in recent times, hosting her as a guest after incidents like the Paris terror attack.

But they’ve really outdone themselves this time.

In a meme shared on the program’s Facebook page and now doing the rounds, Hanson is depicted gawking at the camera with a quote superimposed over the image. 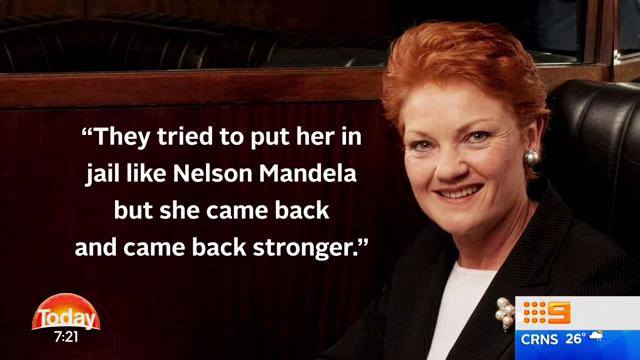 It was run on with the following caption:

No, no no no, absolutely not, for fuck sake no, nein, non, nee, not even close, how-god-damn-difficult-can-this-be-for-you-to-understand-no.

They do have one point, to be fair. Pauline Hanson and Nelson Mandela did both go to jail (one for electoral fraud, the other for defying apartheid – you’ll never guess which was which!).

Then again, so did Ivan Milat, but a comparison still seems a little uncalled for.

But hey, they liked, they commented, they ‘engaged’ with the post, and thus helped drive it to an ever larger audience on social media, presumably what Today had been shooting for in the first place.