Latest
Search
HomeThe Insider
By New Matilda on May 2, 2016 The Insider

Politics is often laced with irony, but in this case, it’s richer than usual, with a dash of bigotry thrown in for good measure.

This morning, Yawuru man Pat Dodson – a longtime and prominent Aboriginal activist – was officially sworn in as a Western Australian Labor Senator.

And so, we now have a record four blackfellas in Federal Parliament at the one time – Dodson, Senator Nova Peris, Ken Wyatt, and Senator Joanna Lindgren. And before anyone asks… no… Jacqui Lambie is not Aboriginal. You have to actually be able to pronounce the name of your claimed ancestor (she mispronounced ‘Mannalargenna’ during a riveting family tale in the chamber last year… which was heavy on theory, light on fact) plus be accepted as Aboriginal by your community, before you can start claiming heritage.

But back to Dodson. He’s a larger than life figure in Aboriginal affairs – known as the ‘Father of Reconciliation’ (not a title you actually want if you know anything about black politics), Dodson is both a controversial and respected figure among senior Aboriginal and Torres Strait Islander activists.

And so to the irony. Dodson has won the job in the Senate, courtesy of Labor bigotry. Retiring Senator Joe Bullock had a hissy fit and quit the parliament over his party’s stance on same-sex marriage. Which is also deeply ironic, because Labor’s stance is extremely weak… they’ve bound members to support same-sex marriage… in a few years or so. Probably. 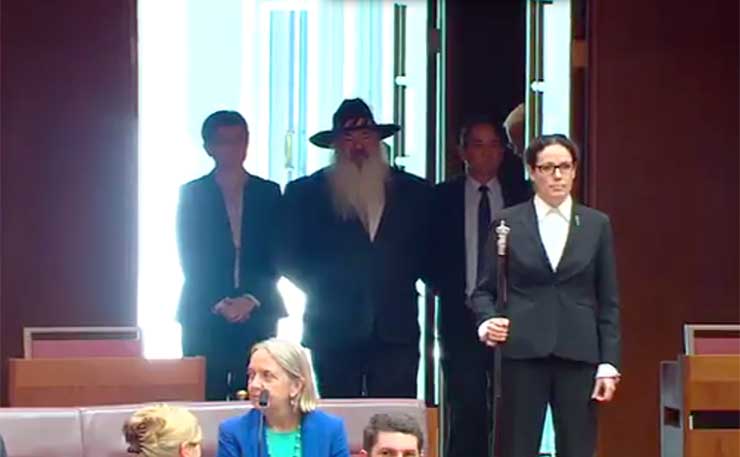 And now to more irony… later this week, Pat Dodson will likely ‘be sworn out’ of Parliament, with Prime Minister Malcolm Turnbull confirming this morning he intends to call a double dissolution election by the weekend.

So having climbed the greasy parliamentary pole, Dodson will slide straight back down it less than a week later.

In case you’re wondering, Dodson’s Big Week In Politics may not actually end up breaking the record for ‘shortest parliamentary term’, but he’ll go very close.

In 1917, Charles Howroyd (from Darwin on the West Coast of Tasmania) died five days after being elected on May 5. His political career was so quick, he never actually got to fall asleep in Parliament.

As for Dodson, if Turnbull requests the parliament be dissolved on Friday, then Dodson will equal (or possibly beat, depending how you calculate, and the time of day) the record. Of course, he should, in theory, return after the election. But stranger things have happened (think Cory Bernardi getting in in the first place).

Either way, bigotry got Dodson into office, and politics got him out. Which is both deeply ironic and appropriate for an Australian Parliament.