It’s official. Tony Abbott is no longer our Prime Minister. Malcolm Turnbull is now in charge of our country. Many weren’t sure he’d last as long as he did. When future generations try to understand the roughly two years of Abbott government, their favoured resource will hopefully be the many satires that will be produced. Scholarly study can’t hope to capture the comedic insanity of our federal government since 2013.

I have no doubt we’ll soon be reading collections of Abbott’s gaffes, misstatements, and offensive comments. These began long before he was elected, and will continue, if he does, in public life.

His most recent was his carefree amusement at the thought of entire countries being destroyed by climate change. Whilst his fingerprints couldn’t be found on the Border Force affair, it seemed like the kind of thing he’d push, though he was probably given no warning of it.

Somehow, it still seemed like the kind of thing you’d expect from a Minister for Immigration and Border Protection appointed by Mr Stop-the-Boats.

Abbott crammed too many disasters into his short reign of insular stupidity to review them all. It wasn’t just poorly chosen wording, but also a complete lack of judgment.

When Bronwyn Bishop spent $5,000 of taxpayer money on a helicopter ride to a Liberal Party fundraiser, which was an hour away by car, she initially declined to even apologise.

Even as it became clear that the helicopter ride was hardly Bishop’s only offence, Abbott stood by her long after his favoured loyalists knew his brand of cronyism was disastrous.

Perhaps the clearest indicator of how out of touch he and his insular, likeminded and almost entirely male cabinet was, was the knighting of Prince Philip. No-one had any idea why Abbott would honour a British prince. A more astute politician would have trod more carefully, given that knighting anyone was already controversial.

But Abbott was always the brawler, and never the compromiser. He thought he could fight his way through every political battle.

One example of this was the battle over changing the Racial Discrimination Act. Abbott, with his Attorney-General George Brandis, thought it needed reform after Andrew Bolt was taken to court over gratuitously offensive columns he wrote about various Aboriginal people. This was cynically presented as a matter of high-minded principle, rather than old-fashioned cronyism. Even with government advocacy and the Murdoch press behind him, an overwhelming 88 percent of the public rejected changing the relevant provisions of the RDA. Eventually, the government beat a humiliating retreat, but not before alienating various communities.

Probably Abbott’s biggest blunder, if that’s the right word, was Joe Hockey’s first budget in May 2014. Having claimed there was a budget emergency, the government slashed spending on hospitals, education, Indigenous affairs, and more. Punitive measures were directed at the young and unemployed, and people with disabilities.

The co-payments were apparently designed to keep poor people from seeing GPs, with the likelihood of them winding up in more Emergency Departments of hospitals instead. The cuts seemed predominantly targeted at the poor.

And yet, with all the cuts, the Liberals didn’t even bring the budget into surplus. This completely undercut their own rationale. If the deficit was an emergency, why wasn’t it overcome? And if running a deficit was acceptable, then why was spending on which so many Australians depend being cut?

To pick yet another fight, over $300 million was cut from the ABC and SBS. That’s despite explicitly promising just before being elected: “No cuts to education, no cuts to health, no change to pensions, no change to the GST and no cuts to the ABC or SBS." And after all his cries of how this government would be different to the liars in the ALP who broke election promises.

It took Abbott about half a year to not-quite-admit that he had broken his promise.

Newspoll’s graphs on the two party preferred vote showed a chasm opening between the two parties in May 2014. The gap occasionally diminished, but was inevitably widened again and again with fresh blunders. Australians may not be liberals, but we are social democrats.

Abbott might have also noticed that the rhetoric that made him effective as an opposition leader was… something else entirely as Prime Minister.

Instead of moderating his language as Prime Minister, he became more vulgar and more extreme. He claimed there was a “holocaust” of jobs under the ALP. And he compared Bill Shorten to Goebbels. More recently he has again compared Daesh favourably to the Nazis, presumably in an attempt to sell the new war.

For many leftists in Australia, Abbott got off the hook for many of the things we hated most about his government. His amusement at the destruction caused by climate change suggests a kind of moral sociopathy. I imagine many of us thought his destructive policies, like trashing renewable energy, were because he didn’t really believe in climate change. Instead, it seems that he just didn’t care about the people it would affect.

The cruelty Abbott’s government has shown to asylum seekers is hard to overstate. Yet Scott Morrison is regarded as a good performer in the Liberal government, and future leadership material for his endless search for ways to persecute and oppress people seeking safety. Even with all the horror stories from Nauru and Manus Islands – not to mention the suffering within detention centres in Australia – the public hasn’t wavered in any meaningful way on asylum seeker policy.

Then there’s Tony Abbott’s foreign policy, like launching new wars, or shamelessly embracing the mass murdering tyrant of Egypt, and endorsing his massacres and repression. Here, one strains to think of others who even noticed his embrace of the slaughter of unarmed protesters. 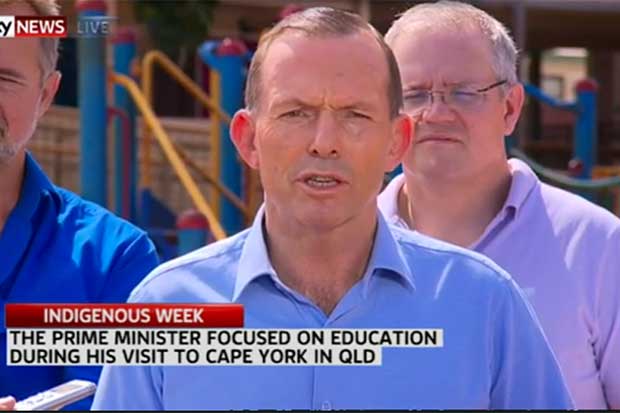 On Aboriginal policies, my colleague Amy McQuire observed with disgust the “revoltingly soft media pack” which has shown “why Tony Abbott continually gets away with the myth that he has a true commitment to Indigenous Australia.”

Whilst Abbott’s claim to be a Prime Minister for Women was widely ridiculed, his similar claims about representing Indigenous people mostly escaped critical scrutiny. Abbott’s gratuitous insults (e.g. Australia seemed “so extraordinarily basic”, and was “nothing but bush” in 1788) attracted some critical attention, but his policies did not.

Abbott also got away with vicious rhetorical attacks, subtle and otherwise, on Muslim Australians. To sell his wars and battle, and stem his plunge in the polls, Abbott latched onto Muslims as his favourite scapegoat. This will be part of his legacy, particularly given how little he was challenged in the media or by other politicians for his shameful bigotry.

When Abbott was first elected, some campaigned on the hope that they could make him “one-term-Tony”. As it turns out, that agenda was actually pessimistic. Abbott was elected as a particularly conservative right-winger, and hoped to implement a raft of right-wing policies. He had the support of right-wing think tanks, particularly the IPA, and the Murdoch press. Yet he was on probation with Australians, who had voted against the ALP, not for Abbott chasing his right-wing fantasies.

The result didn’t come in the form of an election. This is a pity, because it would have been a crushing repudiation of Abbott’s government and, more importantly, his agenda. Instead, the Liberals adopted the ALP style which they used to so scorn: the sneaky knifing of an elected Prime Minister.

Since the days of Rudd and Gillard, it has seemed almost normal for political parties to cut their losses when their Prime Minister is unpopular.

Back in the day, John Howard ruled as Prime Minister for eleven and a half long, long years. He pushed plenty of right-wing policies, and caused many of us on the Left the same disgust we now feel for Abbott. Yet Howard was a very savvy political strategist, who knew what fights to pick, and how to win them. He only came undone when he gained control of the Senate and tried to foist Workchoices on Australia.

The lesson for the Liberals then should have been that there are limits on how far right they can go.

But it is a salutary reminder that limits on the Liberals are determined by us. We also determine what they get away with, which is a more sobering thought.