“As someone who, along with the bank, owns a house in Sydney I do hope our housing prices are increasing”.

Thus spake Tony Abbott, on the same day that Treasury Secretary John Fraser said to a Senate hearing “when you look at the housing price bubble evidence, it’s unequivocally the case in Sydney”, and in the wake of a warning from the OECD that houses in Australia are “vulnerable to the risk of a price correction”.

It’s usually safer to take the advice of independent economists rather than property spruikers, particularly one with a record of idiotic announcements – such as his recent pontification on wind turbines (“ugly” and “noisy”) and terrorism (linking the deranged criminal Man Haron Monis with Islamic State).

Prudence, however, would go against the government’s efforts to stave off a recession. Abbott is counting on rising house values to stimulate a flat economy. For those who own houses, rising prices generate a feeling of prosperity.

If house owners have a mortgage the apparent wealth effect is leveraged. If one has a $700 000 mortgage on an $800 000 property which rises in value by $100 000 (applying Sydney’s 13 per cent price rise over 2014), one’s equity doubles. Even though the burden of servicing a $700 000 mortgage remains, the increased equity can boost consumer confidence, which, after a short-lived spike following the Commonwealth budget, is once again on its downward trend. The home owner may even use a home equity loan to increase his or her mortgage. As some economists say, a rising property market allows home owners to use their houses as ATMs to finance consumer spending.

A moment’s reflection reveals the illogicality of this way of thinking. Unless one is about to trade down or emigrate to Spain (where the bottom has fallen out of the housing market), the gain is illusory: it’s simply price inflation. If you have a portfolio of shares or a Brett Whitely painting on your wall, you may gain some value from a higher market value of such assets because you can sell them, but a higher value of your house is meaningless.

But if enough people go along with the illusion of increased wealth (polling suggests that about half of all Australians believe rising house prices are good for home owners), the effect will be stimulatory – just what loose monetary policy is meant to achieve, without having to rely on an even higher budget deficit and public debt.

The effect on investors, who are crowding out first home buyers, is similar. They have the added incentive of tax deductibility of interest payments to become highly leveraged, particularly if they hold multiple properties, using their established equity as collateral for further borrowing.

There are two shortcomings in an economic strategy based on rising house prices to stimulate the economy.

The first is the risk – or rather the inevitability – that house prices will fall, and, as JK Galbraith points out, leverage works with equal savagery in both directions: if next year that house in the above example falls back by $100 000, one’s equity is halved, and, as shown in the US experience in 2008, the result can be a rapid slide into a deep recession. Bubbles have only two outcomes – a burst or a gentle deflation.

The other is that while such a strategy may avoid increasing public debt, it relies on an increase in private debt. This intended increase in debt is revealed in the budget paper economic forecasts, which show household consumption increasing much faster than wages – implying greater household debt.

We already have high household debt – averaged across all households (including renters and those with little or no debt) it stands at a record 153 per cent of disposable income.  We tightened our belts somewhat after the steep rise in the first years of this century (debt levelled off before the GFC), but in the last couple of years we have been on a borrowing spree (see the upward trend in the graph below).

Ideologues would say this reflects the confidence engendered by the election of a “responsible” Coalition government, while hard-nosed economists point to slow income growth and the effect of record low nominal interest rates as the Reserve Bank attempts to stave off a recession. 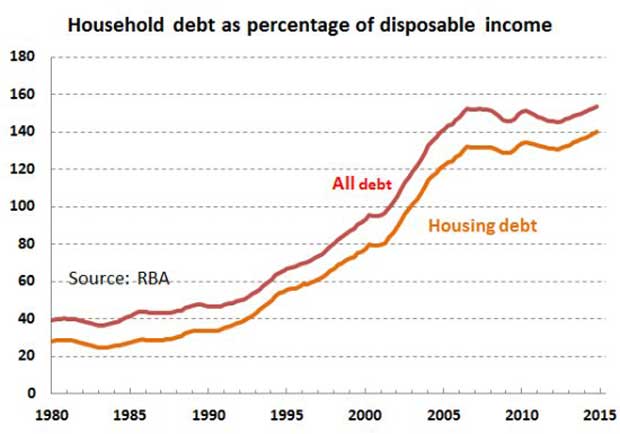 Debt-financed consumer spending gives a first round stimulus to retail trade, and shifts excess stock off the floor, but much of that spending goes overseas – to Korean and Japanese car makers, to Chinese electronics and whitegoods makers, and to foreign tourism operators. That would not matter if we had a strong and competitive export base, but we have a chronic shortfall on our current account (i.e. the balance between our exports and imports), confirmed earlier this month by a dismal trade deficit.

Few would dispute the need for an economic stimulus, but reliance on an overheated property market and ever-increasing private debt is an unwise way to go about it. As the Reserve Bank Governor pointed out just last week, it would be far more prudent if the government were to stimulate the economy through infrastructure spending, where we have big unmet needs.

That would entail an increase in public debt, but, contrary to the partisan rhetoric of recent years, we have low public debt. Unlike consumer spending, public spending can be directed to stimulating domestic activity, particularly in terms of employing the engineering and construction resources left under-utilised after the end of the mining boom.

Governments, through taxation, have the mechanisms to assure lenders that they have the means to service that debt – means that are much more reliable than the false confidence of rising property values. And, thanks to our hard won AAA government credit rating, servicing public debt is much less costly than servicing private debt.

We should not encourage debt-financed consumption as a means of stimulus. Tighter controls on bank lending, grandfathering of “negative gearing” concessions and restoration of the pre-1999 capital gains tax system would all help. There would be some pain involved, but it would be minor compared with the pain of a severe recession resulting from a burst housing bubble and a South American scale balance of payments crisis.