For three weeks now, a concerted political campaign has been targeting Palestine supporters at the University of Sydney, including Jake Lynch, head of the Centre for Peace and Conflict Studies, and me.

Jake and I have variously been the objects of accusations of anti-Semitism, calls for the university to sack us or to close down the Centre for Peace and Conflict Studies, and a stream of criticism from people such as Paul Sheehan, Gerard Henderson and Peter Wertheim. What have we done to warrant such attention?

The catalyst was a student protest at a March 11 talk by Richard Kemp, a retired British army colonel who now defends the actions of the Israeli military. Lynch and I, along with other Sydney University Palestine activists, attended Kemp’s talk. Originally, the main charge against us was that Lynch made an anti-Semitic gesture after he was physically assaulted by a member of the audience. That ridiculous claim has now been thoroughly discredited.

Like clockwork, our critics have now shifted their focus. In The Australian, former Federal Higher Education Minister Peter Baldwin has called on Sydney Vice-Chancellor Michael Spence to “act decisively to defend free speech on campus”. The “outrage” against which Spence must act is Lynch and my arguments that the students had the right to protest during Kemp’s lecture, and that disruptive protest is compatible with freedom of speech.

The struggle for peace and justice is led from megaphones, not from lecture-notes. Baldwin finds my justification of the student protest “casuistic nonsense”. Disagreeing with Peter Baldwin about the nature of free speech is not, however, a sackable offence at the University of Sydney. Baldwin reminds us that he is on the Labor Left: he should well know that the principal historical means by which progress has been achieved – strikes, demonstrations, marches, direct action of various kinds – is inherently disruptive, sometimes highly so.

It should be uncontroversial that disruptive protest is justifiable on campus in certain circumstances. Universities are not just places of teaching and research. They are also venues for a wide range of activities: weddings, sporting competitions, book launches, film screenings, fundraising dinners – and, like Kemp’s talk, political meetings. Each of these activities is governed by different norms from those that apply to universities’ central academic functions.

Kemp’s lecture very clearly wasn’t an academic occasion, since the organisers made no effort to attract an audience from the many staff and students whom the issue of Palestine justice interests. The organisers of Kemp’s talk did not encourage any free and open debate of his highly controversial views. The lecture was only advertised on J-Wire, the online Jewish community news site, and it was only by chance that my colleagues and I learned that it was taking place. Most people who would have liked the opportunity to debate Kemp didn’t even know the talk was happening. 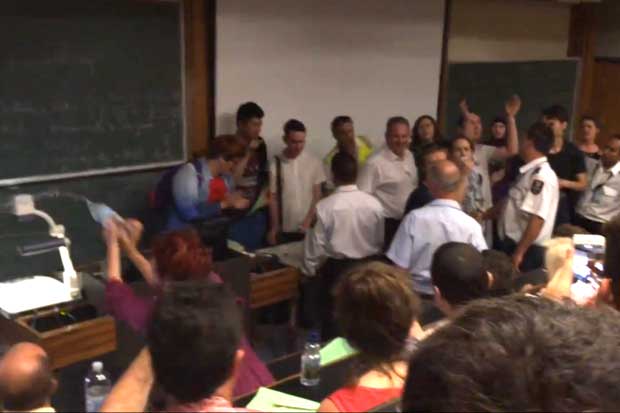 Kemp’s talk, then, was clearly not an academic lecture mounted in a context that encouraged free and open debate. Rather, it was a political meeting – after all, Kemp was only in Australia because the United Israel Appeal had brought him here. Holding the talk at a university venue conveniently conferred prestige and respectability on his view that “no army in the history of warfare had taken greater steps than the IDF to minimise harm to civilians in a combat zone”.

Critics in the media have charged me with intellectual arrogance for believing that disruptive protest is frequently justifiable. But it is the Israel lobby, not me, who has the fundamentally illiberal view on freedom of speech. Baldwin’s argument that disruptive protest cannot be tolerated is made by authoritarian regimes everywhere.

As Amnesty International noted in a supporters’ email last week after the Chinese government imprisoned five women for protesting against sexual harassment, “peaceful protest is a human right.” This principle is just as true at the University of Sydney as it is in Beijing. It is striking that in the same breath as he condemns it, Baldwin also defends Barry Spurr, whose racist and sexist emails dragged the University of Sydney into scandal last year.

Universities are traditionally reservoirs of dissent, and student protest has had a central place on them. Our critics complain that “the whole point and effect of disruption [is]to prevent the effective exercise” of free speech. No: it is Palestinians’ freedom of speech that the students’ disruptive protest furthered, by giving voice to those whose own voice is denied. Had I been running the meeting, I would have invited the protesters to hold the floor for five minutes in order to make their point, and then to either sit down with the rest of the audience, or to continue the protest outside. There is no evidence to suggest that this accommodation would have been rejected.

As I’ve argued elsewhere, there should be no double standard in the norms applied to either pro-Israel or pro-Palestine meetings on campus: “if you object strongly enough to what is being said at a public talk,” I’ve said to my critics, “you also are justified in trying to disrupt it.” No special pleading for my point of view; no double standard; no assertion that only views I agree with should be allowed. Just an acknowledgement of a fundamental civil liberty, the right to protest, and a recognition that political meetings, regardless of where they’re held, are part of the structure of the same political space in which disruptive protest against them also plays a crucial role. No-one has the right to use the university as a political venue, and expect to be exempted from the ordinary conditions of public political action.

These elementary points about the nature of politics are deeply offensive to our critics, who want different rules for the Israel-Palestine issue from everything else. Dean Sherr, head of the Australasian Union of Jewish Students, expressed more explicitly than most what is really driving the outcry against campus Palestine activists when he told PM that Lynch should be sacked because he “offended the Jewish community”. This is the real position of those who claim to be defending free speech on campus.

Sherr manages to ignore the clear offence to supporters of justice for Palestinians created by Kemp being welcomed onto campus. After Charlie Hebdo, it should be clear that questions about freedom of expression cannot be posed in abstraction from concrete political contexts. The opportunity to speak freely is a scarce and contested resource over which different political actors compete. These actors are always characterized by imbalances of power. Nowhere is this more the case than in the relation between Israel – an occupying power with respected universities – and Palestine, a subject population whose very material survival is under constant threat.

If free speech in universities is important to our critics, why are they spending so much time denouncing the brief interruption of Kemp, who can waltz at liberty into the columns of the world’s media, while they remain mute about the infinitely more significant restrictions on the freedom of speech of Palestinian academics, students and student activists, who are subjected to continual deprivation, checkpoints, raids, tear-gas, and bullets?

Support of free speech, it seems, only comes out in favour of their side.

Following a deeply biased investigation, it will be interesting to see if something in the university’s contradictory, ambiguous and slippery “Code of Conduct” is used to justify disciplining, or sacking, Lynch and me.

If the University of Sydney does allow itself to be made the instrument of the Israel lobby’s witch hunt against two of its ideological opponents, we will vigorously defend ourselves. Meanwhile, Sydney and other Australian universities’ cooperation continues with the Israeli institutions that supply the material and ideological infrastructure of the occupation.

Via this cooperation, Australian universities supply valuable legtimisation to Israel’s militarism and lawlessness. As Ilan Pappé, the distinguished Jewish historian and supporter of BDS, noted just after the Israeli elections, “the validity of the BDS option has been proven to be the only way forward” for peace and justice in Israel-Palestine.

The University of Sydney should demonstrate that its professed commitment to antiracism is genuine, by rejecting the Israel lobby’s calls to sack Lynch and me, and by opening a serious and full discussion of the academic boycott now.