It makes for great television, but as for respecting science and truth this week’s QandA on climate change was all sizzle, no sausage. Geoff Russell explains.

I’m not a fan of QandA. It’s not personal, it’s just a loathing for verbal debates. Bullshit tends to be watery and far easier to spread than it is to collect and dispose of. A single pithy sentence can be more memorable than the five minutes it might take to comprehensively dismiss.

Q&A style debates move too quickly; nobody wants the detail, they want friction and entertainment. But talk shows are ubiquitous and highly influential.

This week’s Q&A was on climate solutions, and it was particularly infuriating. Falsehoods went unchallenged while truths were dismissed. And he claimed that South Australia “often” got 100 percent of her energy from renewables. Which was doubly annoying. He meant electricity, of course, but the claim is still dangerously, rather than laughably, false.

Here’s a graph for the past week. You can see that we never got 100 percent of electricity from renewables last week; 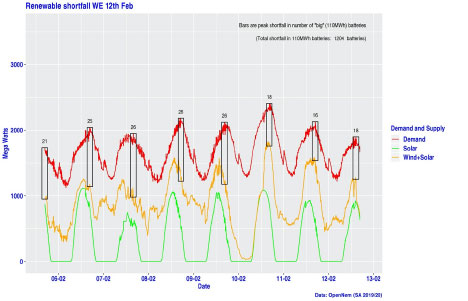 Or the week before that. What are the rectangles with little numbers over them?

The rectangles are 3-hour slabs around the peak demand on each day, the height is the difference between wind plus solar output and the demand. The number over each slab tells you how many of those ‘big’ 110MWh Hornsdale batteries you’d need to supply that slab of energy; assuming they happened to be fully charged.

There is also a figure on each chart for the number of ‘big’ batteries we’d need full to cover the renewable shortfall during the week; because the slab around the peak isn’t the only bit to cover!

How much did that single ‘big’ battery cost? I’ve no idea, but someone might know. Can we afford a thousand of them? Even if we could it would be stupid and cruel… given the 40,000 children in the DRC mining cobalt to satisfy our battery lust. And nor would it even work… for obvious reasons.

Wilder’s extraordinary exaggeration is perhaps what you’d expect of an investment expert, because it gives people a sense that wind and solar are on track to save the planet. They aren’t.

Wilder went on to contradict Q&A host Hamish Macdonald’s claim about Japan building 22 new coal plants. He said it was false, talking about it as if it was announced after the Fukushima accident; it wasn’t, it’s a fresh story from the New York Times.

The story came complete with a picture of one of the plants under construction. But Wilder just blustered along with that special confidence reserved for investment experts, claiming that Japan has “been building a massive amount of renewables”. Wilder clearly uses “massive” rather like he uses “often”; here’s the data. 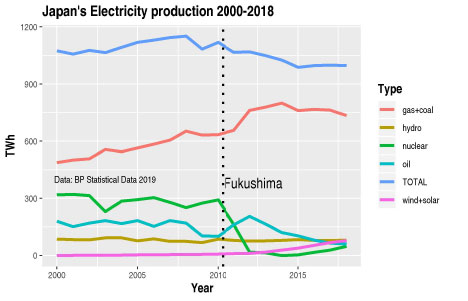 Q&A has a large following and Wilder’s falsehoods will get considerably more circulation than my rebuttals; they’ll be popping up in dinner conversations for years to come. And they’ll probably be embellished with each repetition.

We can perhaps glimpse how “SA often at 100 percent renewables” will be transformed over time by looking at a letter in the Adelaide Advertiser today (13th Feb).

It falsely claimed that just before the Federal Election last year, the UK had a week with all her energy coming from renewables; wrong.

The actual story back before the election was that the UK went for a week without coal; why? because the UK now burns massive amounts of another fossil fuel, gas; and when I use “massive”, I mean massive!

The UK in 2018 (the latest full year data I have) got just 13 percent of energy from renewables, and just 33 percent of electricity. Chinese whispers is incredibly popular among advocates of 100% renewables, and Q&A, like the Advertiser, sparks a veritable flood of falsehoods every time it gets things wrong. Does anybody care? She’ll be right, just keep investing!

But as well as falsehoods, the show had truths that were simply dismissed. Osher Gunsberg is a vegan. How come I’ve never heard of him, I thought? “Runs those Bachelor reality programs” said my partner. “Wow!”, said I. How can a reality TV program host also have a brain? That’s something I’d never considered. I’m not typically fond of being wrong, but this time was utterly wonderful and refreshing.

He weighed in on nuclear and got dismissed by Matt Evans, who isn’t a vegan and doesn’t appear to know anything about nuclear power; not that that slowed him down in the slightest.

Both of them started talking about half-lives of nuclear waste; as if it mattered! Evans produces processed meat from pigs and is worried about radioactive waste water from Fukushima; really? This is like a smoker being worried about carcinogens in shampoo.

I once calculated that you’d need to drink 112 litres of that Fukushima water to get the kind of dose of tritium they give to rats to raise their cancer risk. And that’s just on day one.

You’d need a similar dose on day two, and day three, and so on… for some years! The details are in my submission to the South Australian Nuclear Fuel Cycle Royal Commission.

You can see the problem with verbal debates. Falsehoods can flash like a flood, but rebuttals encumbered with evidence move at the pace of iced treacle.

And then we come to hydrogen. So many people have become instant experts on hydrogen. And the thought of Australia being a super power in anything doesn’t just have investment experts salivating.

What to say about this? The climate solutions debate is dominated by people thinking about how to make money rather than how to solve problems. They seldom, if ever, think about what a proposed solution looks like at scale.

The calculations are straight forward, just look up a few factors and crunch them. Australia exported 66 million tonnes of LNG in 2018, in about 1124 shipments. We certainly need to replace that with something, the world needs that energy. We could replace it with ammonia. We’d need 191 million tonnes of ammonia to do that, in 2159 shipments; meaning not only different ships, but more of them. But shipping is the easy bit.

Global ammonia production is currently only 176 million tonnes, so 191mt is rather a lot! We could generate it with solar energy. It would only take 7,000 Nyngan solar farms covering 1.7 million hectares; and I’m assuming the CSIRO hits their target efficiency for conversion here.

Does anybody think that sounds sensible? Chevron recently moved wildlife off a 1,000 hectare site in WA. It was a remarkable project that took seven years. How long would it take to move the wildlife off 1.7 million hectares? And who would want to. It’s a cruel, ugly, inelegant ‘solution’.

Alternatively, we could just mine more uranium and ship that. How much uranium? Just over 8,000 tonnes could replace 66 million tonnes of LNG; we could ship it in one shipment, but probably wouldn’t.

Mathematics deniers, like other kinds, deny consensus mathematics. Mathematicians solve optimisation problems all over the world in many fields and what they don’t do is the idiocy of chasing short term targets; things like reducing emissions by so many percent by such and such a date.

Nobody in optimisation mathematics does that because it can lock in bad solutions and prevent good ones. But our system of government rewards short-term thinking… which is why, globally and locally, we’ve wasted 20 years transforming so much of our energy system into a gas based system. It reduces emissions but is simply a dead end.

Transition fuel? It’s the reverse; it leads nowhere. Australia and the rest of the world has spent billions on ramping up gas to meet short-term emission targets instead of planning proper solutions that will get us where we so desperately need to go.

What we really need is good planning to map a pathway from where we are to where we need to go on the climate. Satnavs don’t work by chasing short-term goals, because they use consensus mathematics. They plan the entire path before setting off.

So screw markets and all their money hungry rent-seekers, it’s time we did some serious planning.

BE PART OF THE SOLUTION: WE NEED YOUR HELP TO KEEP NEW MATILDA ALIVE. Click here to chip in through Paypal