Despite the obvious disappointment of the Morrison Government, the nation can build an energy network reliant on renewables, while lowering prices. Martin Zavan explains.

Never letting the truth get in the way of a good yarn is an understandable approach when the Prime Minister is talking about his exploits on the footy field back in the day. But when he’s being asked to lead a fossil fuel dependent nation through the transition to renewables, it’s not only dishonest, but dangerous.

Politicians demand proof, but many seem to have little to no desire to follow through and obtain the answers they claim to seek. It occurs too often to keep track of, but something happened in Question Time yesterday that made me take special note.

Opposition Leader Bill Shorten essentially asked the PM why he couldn’t get behind what he called the most widely endorsed energy policy of recent years, the National Energy Guarantee. Not to mention it was the Libs’ own policy just a few months back.

Morrison responded with his typical bluster, but let’s pause for a moment to examine what he actually said, rather than the confected outrage that characterised his reply.

“Labor have not demonstrated that their 45 percent emissions reduction target will not push up prices.

The comments may have fired up the frontbench but they were less eagerly embraced by those with even a passing appreciation for the facts.

During the heated days of the NEG debate we at Greenpeace also wondered what effect this political compromise would have on power prices. We sought to find out, and commissioned the same people who the federal government turns to on such matters, energy market analytics firm, RepuTex.

We asked them to model the impact of the NEG on prices and emissions under the Coalition’s then 26-28 percent target (since abandoned), and under Labor’s 45 percent target.

The full report makes for interesting reading, but the widely-reported headline results were just as damning for Morrison. Under the 45 percent target, wholesale power prices will plunge by more than a quarter by 2030, as more renewables enter the system. 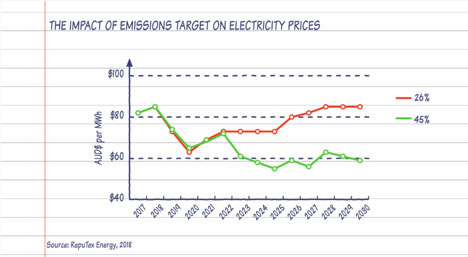 While far from sufficient to address the climate crisis, the NEG with a 45 percent target will reduce power prices.

I can’t say with certainty that the Prime Minister knew this, but if he didn’t he is alarmingly ignorant about the main threat facing this country, and his own party’s policies.

The results were widely reported in The Australian Financial Review, The Guardian and SBS as well as mastheads more to the Libs liking, such as The Australian.

Shadow Minister for Climate and Energy, Mark Butler, leapt on the report and has discussed it in press releases and in the media. And this week Hunter MP Pat Conroy wrote in The Newcastle Herald that “Modelling undertaken by RepuTex shows that 50 per cent renewable energy plan will lead to wholesale energy prices being 25 per cent lower.”

But it’s not just the ALP. Minister for Resources and Northern Australia Matt Canavan has acquainted himself with the report, as well as Josh Frydenberg, and Nationals Deputy Leader Fiona Nash – who cunningly tried to dismiss the experts that her own government relies on by referring to the report as “Greenpeace modelling”.

Climate change is posing hard questions to Australian leaders. Our country has more to lose than many others but the transition also presents opportunities.

We can do our bit to save the planet, while cleaning up our own nation and creating a jobs boom in the new energy economy.