The best predictor of future behaviour is past behaviour. And with that in mind, The Daily Mail is likely to remain an epitaph to stupid journalism well into the foreseeable future, writes Chris Graham.

It sounds like something Monty Python would have invented, but it is an actual passage from the Bible – Revelation 1:19.

And as with all things Bible, it can be interpreted in different ways. As a journalist, and a narcissist, I like to think it’s ‘God’ tipping her hat to my craft, which is mainly political reporting: Write what you see, what is, and what you think will come from it.

Over to the Daily Mail, to completely trash that convention. This morning, here’s the news that we all awoke to:

“Pauline Hanson’s One Nation party has surged in the polls after she wore a burqa in Parliament, as Malcolm Turnbull’s Liberal party slips further behind Labor.

“A Newspoll released by The Australian on Sunday revealed the One Nation party soared in popularity, increasing its primary vote from eight to nine per cent in the past two weeks.

“The results come after Ms Hanson wore a burqa onto the floor of the Senate on Thursday ahead of a debate on full-face covering in Australia.”

Only two of those statements are true… the second and third ones. The first – that Hanson has ‘surged’ in the polls – is obviously complete rubbish, and you don’t have to be an expert in polls to know that. You just need to be able to count to 10.

Actually, just to one. 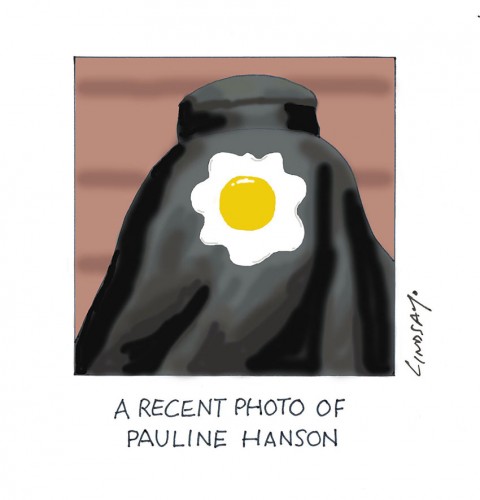 Before I explain why, briefly, Hanson’s stunt was designed to appeal to her base. It obviously worked, because her base like seeing her do stupid shit. Indeed, all she was really doing was, ‘exercising her right to be a bigot’. Which makes Attorney General George Brandis’ reaction all the more hollow. But in any event, the key point is, ‘how big is Hanson’s base’?

Obviously, a rise from 8 to 9 per cent – i.e. a one point rise – does not equal a “surge”. That’s basically akin to claiming that a one-point victory in a five-day cricket test match was a “thrashing”. But journalist Kate Darvall’s reporting is actually even worse than that.

The Australian’s poll surveyed 1,675 people. That’s a pretty good sample size for a poll. The problem is, it has a ‘margin of error’ of about 2.5 per cent. You can calculate that yourself by dividing the number one by the square root of the number of participants. Cue the misfiring synapses everywhere… helpfully, it’s explained here quite simply by journalist Robert Niles (… see what I did there Daily Mail, that’s called ‘attribution’).

In this particular poll, The Australian surveyed 1,675 participants. So the margin of error is 2.44 per cent.

What that means, as explained by Niles, is that if you ran a poll 100 times, and asked different people on each occasion the same question, “the overall percentage of people who responded the same way would remain within [2.4] percent of your original result in at least 95 of those 100 polls”.

To put that more simply, One Nation has had a one percent boost in a poll with a 2.5 percent margin of error… ie. there is no news story here, other than possibly this, ‘Single poll reveals absolutely nothing about public sentiment towards Pauline Hanson’s stupid burqa stunt.’

It gets even more fascinating when you look back over The Daily Mail’s recent coverage of One Nation’s ‘meteoric rise’.

In February this year, journalist Freya Noble reported: “The unstoppable march of Pauline: Support for One Nation is now neck and neck with the Greens – as poll shows Hanson has 30% of the vote in George Christensen’s electorate”. As a side note, that’s the headline folks, not the first par.

One Nation’s national support was actually at 10 per cent in that poll, one point higher than it was last week (again, within a small margin of error). What’s that about ‘unstoppable’?

Here’s Stephen Johnson – a journalist best known for ‘The Islamophobia round’ at The Mail – just two months ago, reporting One Nation’s popularity was “soaring”, with an 11 per cent result nationally.

Long story short, The Daily Mail is making shit up again, and hoping you don’t remember the last time it made up the same shit about precisely the same issue.

All of this begs the question, why would The Daily Mail risk public humiliation and the trashing of its editorial reputation, for a story that is clearly ridiculous, and easily disproved? Mercifully, the answers are far more simple than trying to calculate margins of error.

By falsely reporting that Hanson has “surged” in the polls, The Mail is hoping you’ll share the story on social media, either in celebration (by less than one in 10 people) or more likely in outrage, because the story is so obviously bullshit. Of course, the outrage should be directed at The Daily Mail for making all this up. But regardless, by sharing it, they win, because they get the clicks with no damage to their already shithouse reputation.

Here’s an easier way to think of it: You have a friend who likes to drop his pants and then smear himself in his own shit every time he gets drunk in public. When he does, he always gets a reaction. So, mission accomplished.

That’s the Daily Mail’s editorial strategy right there. Smear yourself in shit, then sit back and revel in the attention.

And that begs the question why any self-respecting journalist – young or otherwise – would seek to permanently stain their reputation by working for such a vile organisation.

Here’s where things get a little difficult. Journalism today is completely buggered. It’s failing everywhere. Major media outlets are putting off journalists like parliament is losing politicians to constitutional complexities.

So The Daily Mail (which has revolutionized clickbait journalism, in part by just stealing other people’s work, but also by just making stuff up) represents a ‘start’ for young reporters trying to carve out a career in the media. Even if that means smearing themselves in shit every time they go out in public.

And yet, in my view, that’s still not an excuse. If I told you the only way to get your start as a brain surgeon was to set yourself on fire, you’d probably look for another career. Reporters these days, apparently, have no fear of self-immolation.

Kate Darvall is also responsible for such scintillating journalism as “Pictured: Drug accused and lingerie model Michelle Leslie moments before she is detained in the U.S. while travelling with rock star boyfriend Daniel Johns”. And yes, again, that’s just the headline. The story is even worse.

Or this, on the same day… because why write just one nothing story on Michelle Leslie and Daniel Johns, when you can write two: “PICTURED: Rocker Daniel Johns and former Bali prison inmate Michelle Leslie put on a loved-up display at Sydney airport as they prepare to board a flight before the model is later detained in the U.S.”

Or why write just two, when you can write three! This from Darvall, a day later: “Are Michelle Leslie and Daniel Johns ENGAGED? Model pictured wearing diamond ring on her wedding finger as she jets out to LA with her rocker beau”.

At the risk of being accused of picking on Darvall alone, here’s some of Stephen Johnson’s recent efforts in The Mail: “The hardline Muslim map of Sydney: How five radical Islamic preachers live within just 9km of each other – and two of them are neighbours (while one still lives with his mum)”.

Or this: “Non-believers are on the nose: Preacher who converted to Islam says Muslims have cleaner bathrooms, are more polite and smell better than those who don’t worship Allah.”

Did I mention Johnson ran the ‘Islamophobia round’?

I could literally go on, and on and on, just like the home page of The Daily Mail does (that’s a strategy to keep you on their home page longer, so that they can fraudulently charge more for ads).

But I’ll spare you, because the unfortunate reality is there is no way to stop this sort of journalism, and there’s no way to prevent it creeping into the majors either. It’s already there (albeit usually not as overt), and has been for quite some time. Another long story short, if journalism is dead, The Daily Mail is the gravestone.

For, as sure as The Mail is only ever a syllable away from another ridiculous headline and story that further undermines confidence in the Fourth Estate, there will always be a line of hungry young reporters prepared to suspend everything they learned at university in order to get ahead.

The only thing you can really do about it is call it when you see it, without linking to their stories.

And the next time a Daily Mail journalist smears themself in shit and shouts, ‘Look over here’… as the Bible might say, avert thine eyes.

* PLEASE CONSIDER SHARING THIS STORY ON SOCIAL MEDIA: New Matilda is a small independent Australian media outlet. You can support our work by subscribing for as little as $6 per month here. The author of this article Facebooks here, tweets here.