You’re not supposed to speak ill of the dead. But then you’re also not supposed to demonize a people on the basis of their race. Amy McQuire weighs in on the passing of cartoonist Bill Leak. And a note to readers, this article was originally commissioned by the Sydney Morning Herald, and then rejected on the basis it was “old news”.

Ms Rule, a member of Warriors of the Aboriginal Resistance (WAR) staged a protest from her seat in the back, on her older brother’s birthday. Wayne Fella Morrison would have been 30, if he had not died in a South Australian jail last year under suspicious circumstances.

The reason Ms Rule’s protest was so important is because it has unveiled an embarrassing uniformity in the media’s coverage of Leak since his passing. Media commentators are unwilling to step outside of the narrow spectrum of debate they have set themselves.

The most galling example of this was 7:30 host Leigh Sales piece in the Australian, which venerated Leak as “generous” and a “great friend”, with no mention of the hurt he has caused many Aboriginal men and women over his career.

This is largely because his cartoons have never affected her, because Leak was her friend.

And if Leak was your friend, she wrote, he was “so loyal, so unstinting in his praise if he loved you”.

Of course, Sales neglected to mention what happened if he was not your friend. We saw that in his many cartoons branding Aboriginal men as violent and neglectful, and women as battered and bruised; all of them portrayed as if they did not love their children, or each other. 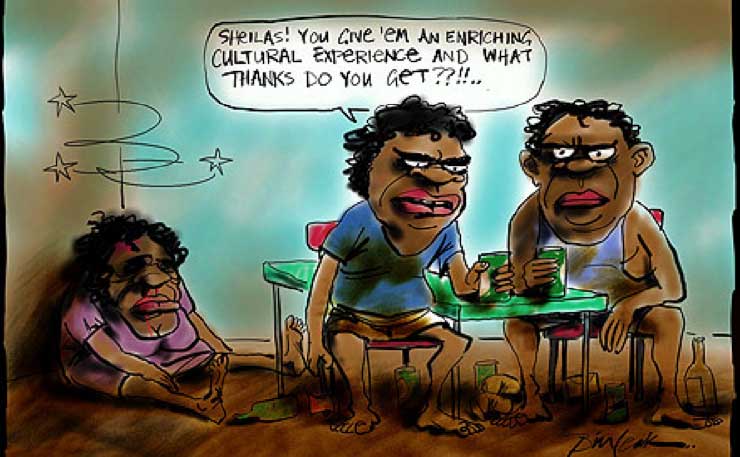 The reason Leak’s cartoons were so hurtful to Aboriginal Australia is because they were not isolated. They were not genius. They were tired, and the latest incarnation of a racist legacy which has portrayed Aboriginal men and women in the same way since colonization.

Academic Dr Liz Conor has written extensively on how colonial propaganda used images of Aboriginal women as either overly sexualized, or as primitive and impaired, to dehumanize Aboriginal people to such an extent that it helped justify the theft of land. These racist tropes helped spread the untruth that Aboriginal people were “incapable of two things -incapable of agency, and… incapable of any kind of love, romantic love, familial love, love for children… and if you take that way, I don’t know how you could dehumanize a person more,” Dr Conor told me last year.

When you look at Leak’s cartoons, particularly the recent one which portrayed Aboriginal dads as neglectful parents who did not know the names of their children, it is not hard to see how Leak continued this colonial legacy into the present.

While Sales will never have her children taken away, the threat of child removal is a very real one for Aboriginal people today. Aboriginal children are more likely to be taken away for ‘neglect’, than ‘emotional abuse’ (the most common for non-Indigenous children), and what determines ‘neglect’ is often culturally arbitrary. Painting Aboriginal dads as neglectful has a real impact on their perception, and potentially tragic consequences for children.

These racist images also contribute to silences, in that Aboriginal women often feel they cannot talk about issues around violence without our words being misused by people like Leak and other conservative shock jocks, who express faux outrage over Aboriginal disadvantage to justify their racism. That’s why Ms Rule’s stand last night was so important. It represented how the images of Aboriginal men in Leak’s cartoons have real consequences.

Ms Rule told me today she saw a direct correlation between the images painted by Leak and black deaths in custody.

“Racism in Australia has not ceased and we do not stand by those who wish to water down the very real effects that racism is having on our social and emotional wellbeing,” Ms Rule said.

“We decided that it was oppressive for Aboriginal people to be in such spaces and so we decided to walk out in protest – we were not removed… and we left on our own terms.

“My brother Wayne Fella Morrison would have been 30 years old on Monday… any form of racism demonizing Aboriginal men in our communities translates to cases like my brothers, along with the high rates of suicide and chronic depression we are facing in our communities.

“Bill Leak will be remembered as a racist, sexist homophobe.”

You might coil back from Ms Rule’s comments, but remember that Aboriginal people had the very same reaction to his cartoons. While the media wants to paint Leak as a freedom of speech warrior, his work ironically contributed to the silencing of a people who are rarely afforded his large media platform.

While Aboriginal people and those who remember a different Bill Leak are told ‘not to speak ill of the dead’, and told to respect the man, it is very rarely that white Australia extends Aboriginal people the same courtesy.