In terms of introduced species into Australia, cattle and sheep cause by far the most environmental and climate carnage. But they also make money. Which is why rabbits are currently in the government’s sight, writes Geoff Russell.

In a few weeks Australia will release a deadly virus into the bush. We imported it from Korea and are a fixin’ to kill rabbits with it. The official name of the virus is rabbit haemorrhagic disease virus K5 (RHDV K5 or simply K5). Ebola for bunnies.

But that tag is a little misleading because, despite both being haemorrhagic diseases, K5 would normally kill in a day or so, rather than the 2-3 weeks that ebola takes to kill people. K5 is from the same family of virus that escaped into Australia in 1996 and has been killing rabbits ever since. Here’s how a veterinary manual describes what happens:

Why don’t you see a lot of dying rabbits in the outback? Because the rabbits generally die in their burrows; this is a tourist friendly disease.

The release is primarily to protect Australia’s sheep and cattle industries. This is illustrated by the repeated references in announcements (e.g., here, here, here) to the $200 million dollars in economic losses caused by rabbits.

Talk of any kind of damage from the sheep and cattle industries brings to mind talk of kettles, pots and black. $200 million is a drop in the ocean compared to the multiple forms of harm these industries do. For example, they produce 2.2 million tonnes of methane annually. A tonne of methane will cause about 105 times the warming of a tonne of CO2 during the 20 years following it’s release. So, at a carbon price of $20 per tonne, these industries do around $4.6 billion dollars of climate damage annually; which is more than all our coal fired power stations put put together.

According to the Cancer Council the red meat industries (including pork) also cause thousands of bowel cancer cases annually.

On both environmental and health grounds, Australia’s sheep and cattle industries don’t deserve any kind of protection; they make rabbits look like model citizens.

To be fair, rabbits also produce methane, and this alone makes them a serious environmental problem. And if you eat them, then like all red meat, their meat is carcinogenic. But calculating their climate damage needs a reasonable estimate of total rabbit biomass, and that’s a tough thing to estimate, but I’ve not seen anything to suggest that the biomass of rabbits is close to that of sheep and cattle.

So yes, rabbits are an environmental problem, but they are not our biggest by any means, and the long-standing approach of victimising them and allowing death by any means is morally repugnant and scientifically simplistic.

Rabbit lovers are in a state of panic and despair over this release, but with Deputy Prime Minister Barnaby Joyce helping to drive it, their interests have about as much chance of being taken seriously as those of people who don’t like pigs being ripped apart by dogs (a fine redneck pastime), or climate change.

There is a vaccine for the current RHDV, the one that escaped in the 1990s, but there has only been a small pilot study to see if it works on K5. Why release the virus before there’s a vaccine for people’s companion rabbits? Because those driving the release don’t just hate wild rabbits and love our carcinogenic cattle and sheep industries, they don’t really give a damn about exercising any duty of care towards the companion animals of people who probably didn’t vote for them anyway.

The history of rabbits and sheep in Australia is fascinating. They have a symbiotic relationship. In 1991, Department of Primary Industries expert on introduced animals, Gary Twyford described the introduction, and more importantly, the spread of rabbits in Australia (1):

“… the sheep’s habit of close grazing make the feed the ideal length for the rabbits to eat. Rabbits do not like long grass; in fact long grass is the greatest deterrent to the increase in numbers and spread of rabbits…. [sheep]were grazing everywhere and opening up country that would have been unsuitable for rabbits before the sheep arrived.”

So the size and extent of our rabbit problems are partly a byproduct of our sheep problems.

In recent years, independent academics, unlike Barnaby and his mates, have started to appreciate the considerable complexities of controlling introduced animals. Red-necked, knee-jerk killing responses are being questioned.

In 2015, a major study (10 authors) of feral cat food sources cautioned that people wanting to reduce rabbit populations should beware of cats switching to other prey. The implication is that if such actions aren’t carefully planned, any reduction in rabbits could result in devastation of other species; and this may wipe out some endangered species.

This is just one of a number of recent calls for caution on killing as a population control method. Another came from one of Australia’s foremost experts on mammal extinctions; Chris Johnson. Note that these calls for care and caution aren’t from animal rights activists, but scientists who aren’t at all shy about killing large numbers of animals if it helps some conservation goal.

Johnson lists what he considers to be successful killing campaigns, but notes that: ” … successes like these are most likely to be won under quite particular conditions.”.

The K5 virus release runs counter to Johnson’s advice. It isn’t being released into a single eco-system where all the relevant variables are known and where the result has some chance of being predicted. This virus release will effect different eco-systems with very different sets of circumstances right across Australia. It may kill off rabbits without impacting endangered plants or animals in some of these, but it may cause extinctions in others.

Doherty’s data upset more than a few long-held beliefs about cats and rabbits. Sure, cats eat rabbits, but they don’t use them as a constant food source when available. He pulled together all the data on scats and stomach contents to show that in most studies rabbits only appear in less than half the scat/stomach samples found. And in many they were closer to zero. 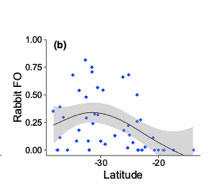 Here’s one of his images plotting the frequency of rabbits in scats and stomach contents as a function of latitude.

Each blue dot represents a single study. The often-stated maxim that cats will use rabbits as a staple food if they are available (a maxim even repeated by Doherty) simply isn’t supported by the data. This effectively undercuts the argument that controlling rabbits will control cats. Without rabbits to eat, cat populations may well decline, but it may happen slowly and other species could suffer significant losses on the way.

Johnson’s argument for caution should be self-evident. Eco-systems are complicated and there is rather a long history of interfering with them and being unpleasantly surprised when things don’t go as planned. The outcome of any eco-system interference will depend intimately on the circumstances within that eco-system.

The K5 release is pretty much the opposite of caution. It will inevitably be national, and across a considerable range of ecosystems. On technical grounds this isn’t a wise move.

Suppose a virus existed which, by death, could rapidly reduce the human population by 90 percent. Such a reduction could benefit the remaining people enormously, in addition to perhaps restabilising the climate and preventing further wildlife extinctions. Would anybody release it? I certainly hope not.

However much some people are drawn to a utilitarian calculus which chooses actions based on total suffering, they seem rather more reluctant when their own lives are at risk, even if it is for the greater good.

The rabbit problem forces us all to think very carefully about our ethical philosophy. It is true that rabbits are far too successful for their own good, let alone that of some other species; rather like we are. But does that mean we should subject them to deliberate lethal controls?

I don’t think so; why engage in mass killing to support carcinogenic eco-vandal industries like the cattle and sheep industries. We have some large and urgent environmental issues to deal with and it is appalling that we protect and subsidise the industries at fault.

We need to get smarter, not crueller. We need good science to control rabbit fertility and breeding. A great deal of work has been done on immunocontraception over the years. Nobody said it would be easy, but the best solutions are rarely the simple ones.