For those of us following the dismal history of climate policy over the past decade, the tribulations of the Turnbull government last week demonstrate a grim irony.

For years, climate was a disaster area for the Australian Labor Party, destroying prime ministerships and wreaking havoc within the ALP base. Kevin Rudd’s backflip on the “great moral challenge” of climate change was the beginning of the end of his prime ministerial authority; Julia Gillard’s ill-fated promise that “there will be no carbon tax under a government I lead” became a weighty millstone around her neck.

In contrast, Tony Abbott mounted a simple but devastating offensive against the very concept of carbon pricing. The ETS was a “great big new tax on everything”. Voters believed it, because their electricity bills were skyrocketing (though for entirely unrelated reasons).

Abbott’s attack was profoundly dishonest – Whyalla was not wiped off the map – but witheringly effective.

So there must be some in the ALP who will be harbouring more than a little schadenfraude at the disastrous week the Turnbull government has just endured, as a result of carbon.

The week began with an apparently harmless thought bubble by Environment Minister Josh Frydenberg, who mentioned in passing that the government was considering an emissions intensity scheme to deal with carbon emissions from the electricity sector.

An emissions intensity scheme is basically just another type of ETS. Instead of capping emissions outright, it instead regulates emitters by the “intensity” with which they pollute. In other words, a certain “baseline” standard is imposed, and plants and factories that don’t meet it have to then trade with more efficient polluters for extra rights to spew out carbon.

Economists and energy market experts generally favour such schemes because they cost less than more draconian regulations, such as simply shutting down the worst polluters.

As Frydenberg said on Monday – entirely reasonably – “we know there’s been a large number of bodies that have recommended an emissions intensity scheme, which is effectively a baseline and credit scheme”. A number of the newspapers carried the quote, reporting that maybe the government was considering some kind of emissions trading scheme to supplement its manifestly inadequate Direct Action policy.

The Liberal right went ballistic. Right-wingers like Cory Bernardi and Craig Kelly rampaged across the mediascape at this affront to Coalition orthodoxy. Bernardi was interviewed by – who else? – Andrew Bolt. Kelly was more ecumenical, telling the Guardian that it was “highly unlikely that the Coalition would adopt carbon trading at any stage.” Washed-up Liberal staffer and part-time Sky News studio usher Chris Kenny penned a column in The Australian, calling it “political madness… for Turnbull to even consider such a move”.

“As we have heard already from conservative Liberals such as Cory Bernardi and Craig Kelly, it is like kryptonite to the party base,” Kenny argued.

Good old Tony. At least you always know what he’s against.

Josh Frydenberg was marched out to correct his grievous error, giving a grovelling apology to the Liberal right on 3AW. “The Turnbull Government is not contemplating such a scheme, we’re not advocating for such a scheme,” he clarified. “What we are focused on is to drive down electricity prices and to increase energy security,” he said.

On Wednesday he repeated himself. “It’s always been our policy to have a review. I didn’t mention an emissions intensity scheme – that’s not in any document the Coalition has put out,” the Environment Minister said.

Finally, just before boarding a plane for Antarctica, Frydenberg disavowed himself a third time, telling reporters that “I have never advocated for a carbon tax and an emissions trading scheme; that is why the Government won’t proceed with one.” Somewhere in Hobart, a rooster crowed twice.

Frydenberg’s earnest apologies did not placate his enemies within the Liberal Party. The right wing remains apoplectic, while cabinet colleagues showed their scorn by backgrounding to friendly press gallery journalists. When asked whether he knew anything about the heretical emissions intensity scheme, Turnbull pointedly refused to come to the Environment Minister’s defence.

With Frydenberg dispatched out of the country, the government might have thought that the matter would die down. Unfortunately, Fairfax Media got hold of a report from the Australian Energy Market Commission that the government had tried to bury. The report showed that refusing to implement some form of emissions trading would actually cause electricity prices to go up. In contrast, the report’s modelling suggested that implementing an emissions intensity scheme would lead to costs being around $11 billion lower over the decade to 2030. 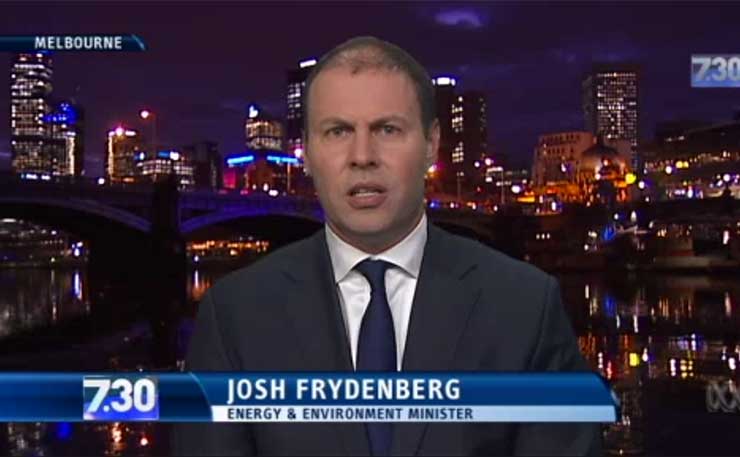 The idea that emissions trading can reduce the costs of transitioning to cleaner energy is well established, and the feasibility of such a scheme was of course demonstrated in a rather detailed case study during the two years of the Gillard government’s ETS.

But in the context of a government continuing to insist that its ideological opposition to any form of carbon pricing – or meaningful action on climate change – was simply about keeping household electricity bills down, the report was devastating.

By Friday, the government had completely lost control of the carbon policy debate. Chief Scientist Alan Finkel released a report into Australia’s electricity system commissioned in the wake of the South Australian blackout. Entirely unsurprisingly, Finkel’s report argues that an emissions intensity scheme is a better and cheaper option for energy policy than doing nothing.

To top it all off, South Australian Premier Jay Weatherill then announced that perhaps the states could get together and do an emissions trading scheme on their own. After all, Weatherill pointed out, federal climate policy has been a chaotic mess for years.

For those paying close attention, like Michelle Grattan, the Australian’s David Crowe or the Guardian’s Katharine Murphy, Turnbull’s disastrous week demonstrated the Prime Minister’s eroding credibility. It showed in graphic terms that Turnbull is now utterly beholden to the Liberal right.

As I argued last week, the Turnbull cabinet is now effectively a minority government, dependent on the constant support of the Liberal hardliners for each and every policy and bill.

It might even be worse than that. As more than a few observers this week have noted, Cory Bernardi is winning on far more positions under Malcolm Turnbull than he he ever did under Tony Abbott. Meanwhile, there is rising panic in the Coalition backbench at the resurgent strength of the One Nation vote in regional and suburban electorates.

As the Coalition slides to the right, Turnbull seems shallower and more insubstantial by the day.

Oh, and Australia recorded a quarter of negative growth. Not the kind of news that any prime minister likes explaining, even if Australia almost certainly isn’t yet in a recession.

2017! For Malcolm Turnbull, no less than the liberal left in much of the western world, it can’t come soon enough.