Border Force’s latest public relations manoeuvre would be menacing if not for one saving grace. The occasionally released podcast – intended to counter the bad publicity associated with offshore detention and the turning back of asylum seeker boats – is hopelessly boring.

Already effective at silencing the voices of those it imprisons or turns back to sea, the agency has extended its ability to steer the public conversation. Immigration Minister Peter Dutton and Border Force Commissioner Roman Quaedvlieg hardly need their own media outlet: There are also plenty of places that offer soft-ball interviews, print ‘leaked’ talking points (and badge them as exclusives), and reheated press releases.

If they feel like it, the pair can always venture into the apparently radical world of ABC television or radio, but there’s no real need. They already have plenty of ways to get their message out. Dutton was recently on Ray Hadley’s program, for instance, chortling along with the 2GB presenter. During the chat, he explained the rationale for his new podcast.

“Sometimes, particularly through some of the left wing media outlets, Border Force gets a pretty rough time, so I think it’s good to put a few facts on the table and I think people will enjoy the content and I think that’ll continue.”

The Department already spends millions on PR and media training. But why not take the message straight to the people. Put out your own table, serve your own facts on it. 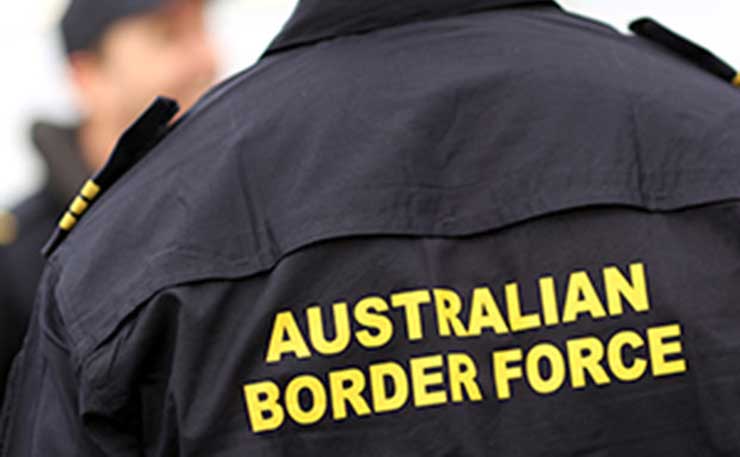 Needless to say, the podcast leaves plenty off the table, omitting potentially interesting lines of questioning like ‘do we know what happens to refugees after we turn their boats back’. And when Dutton says he thinks people will enjoy the content, we can only assume that he is lying, or exactly as dull as he comes across… admittedly a staggering proposition.

The program is well produced though, employing an interview format with sound apparently recorded in the field. These chats are interspersed with swirlingly helicopter blades and what sounds like doofed-up elevator music.

Beyond this, there’s not much to excite the average listener. We are walked through the precise mechanics of the Ocean Shield vessel and have its “maneuvering capabilities” explained in detail. Words like “azzi” and “thruster” and “tunnel” are organised into sentences that apparently mean something in English, but will sound foreign to anyone who doesn’t have a maritime mechanical fetish.

There’s another piece on airport liaison officers. Even the drug bust story blows.

The content is boring, and things only get worse thanks to what people in the radio business call ‘the talent’. Commissioner Quaedvlieg makes an appearance in episode one, but the star fails to dazzle, plonking along with the vague, euphemistic, and ultimately impenetrable language bureaucrats normally deploy at Senate Estimates hearings.

Easily the best part of the programing so far is the comment section on ITunes, where the show scores a lacklustre two and a half stars out of five rating.

“Who thought this was a good idea?” writes A.M in a one-star review titled ‘Pure propaganda’.

“After refusing to respond to legitimate journalists’ questions with the justification of “on-water matters”, the ABF’s new podcast comes across as pure propaganda,” observes timb07. “It shames me deeply to say this (as it should shame every Australian), but Goebbels would have been proud of this podcast”.

In a perplexing five-star rating, someone using the screen-name ‘CBRjourno’ writes: “I was turned on to this podcast by [Fairfax journalist] James ‘the god of journalism’ Massola, and wow am I glad about it. This is the most informative podcast, demonstrating production values and skill of the highest order. I particularly like the anti-aliasing used for the album art and the san serif font.”

I’m honestly not sure if that one is sarcastic or not, or whether the person who left it is related to Massola or Quaedvlieg. Given the focus on the particular and the mundane, it may well have been Roman himself.

In spite of ‘timb07’s’ concerns, the truth is that no propagandist, or PR honcho, would be very proud of this podcast.

And still, its half-hearted reformatting of propaganda as entertainment nags at areas of real concern.

Not content with the assistance it already gets, the agency has decided to bypass journalists all together. If this podcast wasn’t the audio equivalent of paint drying, that could be quite an effective strategy. Not only could they reach voters directly, it might also offer a format to provide official comment after an event like the 2015 visa search fiasco.

You present a pseudo-interview, everyone else reports the Commissioner’s comments, and you never have to go face-to-face with an actual journalist. Listeners could be provided with the theatre of the interview in what may well be an entirely scripted interaction. Press releases brought to life.

Politicians are becoming adept at finding ways around the media. It’s not always a bad thing; it’s helping to break the two-party system, brining new ideas into public debate, and democratise that discussion.

For leftists, there is an obvious advantage. CNN doesn’t want to cover the Bernie rally? Fuck ‘em – stream it straight to Facebook.

No crews showed up at Standing Rock? Get the whole thing directly to the public from the smartphones you take with you. Activists don’t need the media to mediate any more.

It’s also good for groups or communities who don’t see themselves represented accurately in the mainstream. As Jack Latimore recently argued, the disruption of the Australian media landscape has increased the presence of Aboriginal and First Nations voices, bypassing legacy media outlets who don’t care to listen.

And yet that disruption can still re-concentrate power. Both Hillary Clinton and Donald Trump have engaged with or held away the media as it has suited them. Both have criticised the other – accurately and hypocritically – of avoiding critical engagement with the press.

Why take tough question when you can get to people directly. Tweets don’t come with follow-up questions. Appearances on Saturday Night Live that go viral don’t ask tough questions of the powerful, and neither does an episode of Channel Seven’s Border Security, by the way.

Trump still has donors and data centres and owes a huge degree of his success to the media, but he’s built a lot of his campaign by connecting with people without journalists in the middle.

In both the US and in Australia, journalists remain disliked and distrusted by the public. Many are celebrating the collapse of the industry. At his rallies, Trump names and denigrates individual journalists. His promises to gut laws protecting the free press don’t seem to bother many.

This opens the opportunity for those already ensconced in power to build even stronger walls. If you don’t trust the media, and the Border Force podcast is interesting enough, why wouldn’t you be swayed by it?

The podcast, and the media bashing Dutton has been up to recently, should be seen as part of this perversion of the (often justified) public anger with journalists, which twists it back into yet more power for those at the centre.

The vacuum left by the fall of old media networks is being filled by public relations experts who can produce their own pseudo-media. This is not just state funded media, it is state controlled.