Greed and indifference brought us global warming. Science is our only hope top undo it, writes Geoff Russell.

What are we to make of Jim Green’s impassioned defenestration of fast neutron reactors? Let’s begin with a little background.

Back in late 2008, I was beginning to realise that fighting climate change with wind and solar power was like fighting a bushfire with a bucket. Fast neutron reactors broke through my anti-nuclear prejudices in a way no other nuclear technology had done.

Here, I thought, could be the answer to all of the problems with nuclear power. They can be fuelled with nuclear waste from older reactors and can even burn plutonium. They had it all; except perhaps for cheap.

So I started reading and learning. These promised features made me re-investigate the beliefs of a lifetime. That’s a rare thing for most of us. But not uncommon for working scientists.

Back in the 1960s, leading geneticists thought genetic mutations were a rare thing; just “once in a hundred thousand generations“. No geneticist believes that anymore. DNA and cancer biology has been sliced, diced, reglued and origamied a hundred times in the past few decades; entirely bypassing the ancient defunct slogans of the anti-nuclear movement.

Nuclear has been a successful technology for decades

As a result, some eight years later, I don’t much care what kind of reactors people build. No-one would build a reactor with a positive temperature coefficient, so we don’t even have to mention it.

A containment vessel? Chernobyl didn’t have one and they can handle a bad or disturbed person armed with a fully laden Jumbo jet; which is good. But even a containment vessel is probably overkill for small reactors buried underground.

Eight years have taught me that when nuclear goes wrong, the only significant risks to the public come from fear itself. Nuclear going wrong is obviously a very big deal for plant owners and operators, as is any large industrial accident; but not for the public. People could have stayed happily living and working and rebuilding their lives after the tsunami at Fukushima, if not for the misleading impact of decades of fear mongering.

Eight years have taught me that while there are numerous incremental technical advances that should be included in new reactors, the old ones that have been running safely and cleanly for decades are all pretty bloody good. How many people have a 40-year-old fridge, phone or car that still works and works well? These reactors have saved over 1.8 million lives by displacing fossil fuels and avoided 64 gigatonnes of carbon dioxide.

Renewables and the only graph that counts

Checkout the graph (from the World Bank). During the roll out of nuclear power in the 70s and 80s our proportion of energy from fossil fuels was in free fall. 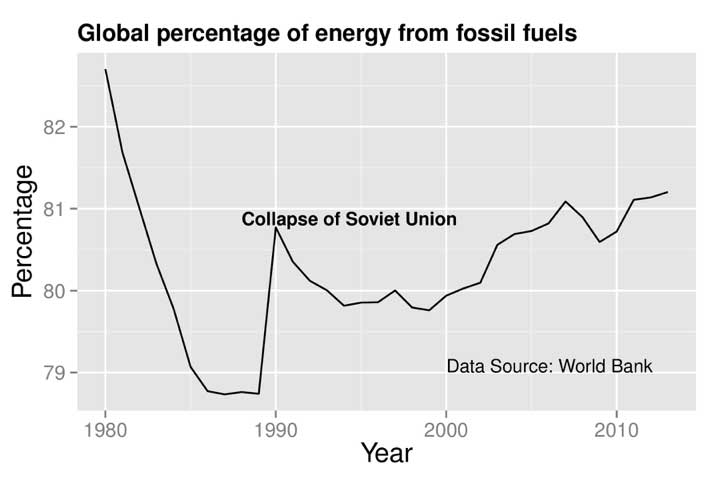 But with the rise of the renewables, particularly after 2000, the fossil fuel percentage is going the wrong way. Like I said… it’s bushfires and buckets. This is the context we need to appraise Green’s dismissal of fast neutron reactors.

It’s pretty bloody clear that not only does Jim think the technology is failing and will fail, but he desperately wants it to fail. He will clearly be delighted if all of the current fast neutron reactor projects are either actively cancelled or stagnate.

Let’s ask a hypothetical. What would Jim Green’s response be to a successful fast neutron reactor? Or to a successful molten salt thorium reactor? Cheap, clean, baseload, safe, mass produced in a factory, and proliferation resistant?

Me, … I’d be dancing in the streets in celebration and so would anybody else who gives a damn about this planet.

And what of nuclear fusion? It sounds like a pipe dream to me and I certainly wouldn’t bet the farm on it; but only a fool would reject further research.

There are so many potentially planet saving reactor designs (not just fast neutron designs) under active investigation at the moment and we should all be hoping that one or more will succeed. And one is all it would take; just one good design.

A fast neutron reactor delivers some 100 times more energy per kilogram of uranium than todays reactors. A small mass produced reactor of any kind could deliver clean energy roll-out speeds that made even those of the 1970s look slow.

Read the graph above and weep. A new nuclear technology is pretty much the only chance we have.

Renewables simply can’t do it. Have you noticed that most renewable hype is focused on cost? But that’s the wrong problem. Cheap might be nice, but it isn’t the main game. The main game is big; we need big; we need rapid rollouts; and we need dense. Many countries don’t have a zillion hectares of spare land to cover with wind and solar farms; and who’d want to?

Apart from needing to replace the over 80 percent of energy that comes from fossil fuels, we also need to at least double global energy output to alleviate the poverty of the 4-5 billion people on the planet who desperately need it. And I’m assuming plenty of advances in energy efficiency and reductions in use; none of which will obviate the need for big.

There is nothing even remotely on the horizon in renewable research to match the 100-fold productivity improvement of a fast neutron reactor. Nothing that will match the roll out speed deliverable by mass produced reactors. Renewable-only advocates thrill with excitement at a few percent here, a percent there; cheaper, lighter and flimsier.

They glorify selfish home-owners with a basement full of lead-acid, blood-cobalt, graphite and lithium. It’s bad, small-minded technology which tackles the wrong problem, and tackling the wrong problem is a great way of failing to tackle the right problem.

Dismissing a technology with cherry picking

Jim’s determination to paint fast neutron reactors as doomed to fail is well illustrated in his article. Gosh, the Russian BN-600 reactor has had 27 sodium leaks. He forgot to mention that the Beloyarsk 3, the reactor in question, ran for 33 years. On average, it produced 10 times more energy annually than the combined output of our largest solar farms… Nyngan and Broken Hill.

If engineers can’t fix sodium leaks, then renewabies advocating millions of tonnes of molten salt storage attached to solar farms might want to do some rethinking. Strangely, I reckon fixing leaking sodium is a problem worth solving given the payoff. Go back and look at that graph if you don’t get it yet.

The final disingenous straw in Green’s article is roping in proliferation to do some lifting in his argument. He cites George Stanford in an article on Barry Brook’s BraveNewClimate, and deftly strips a fact from its context. The very next sentence after the one Green quotes saying an IFR could produce weapons material says very clearly that while any reactor can produce weapons material, there are much easier ways.

Iran has demonstrated what has been obvious to experts for decades… that you could close every nuclear reactor on the planet and any country with money, intent and skilled people could still produce atomic weapons.

You don’t need reactors to make bombs. You don’t need plutonium. All you need is very highly enriched uranium and you can make that with centrifuges.

The Iran affair and the ongoing North Korean problems have demonstrated what is obvious to anybody who has been paying attention. Weapons proliferation of any kind is a political problem, not a technical one. We won’t achieve safety from chlorine gas attacks by banning bleach and chlorinated swimming pools. We won’t achieve safety from land mines by banning plastic and nitrate production.

And we won’t beat climate change by shutting down nuclear reactors. At the moment there is a battle raging in the US between anti-nuclear forces who rank climate change well below their phobic fear of fission, and the new breed of pro-science pro-nuclear environmentalists.

Anti-nuclear forces want to shut the Diablo Canyon nuclear plant in California in favour of natural gas and increased emissions. The Diablo Canyon plant generates more than twice as much electricity as all of California’s solar panels. We should all be hoping that the side wanting increased CO2 emissions loses. There is a veritable alphabet soup of advanced nuclear reactor projects in progress around the world. Many will fail. But that’s true of every advanced technology.

We don’t need them to all succeed.

The benefits of even a single success will be vast and it’s increasingly obvious that we have no other choices.