Kim Kardashian’s name doesn’t make the pages of New Matilda very often. This appearance is even less edifying than the first. Vanessa de Largie takes up the story.

On October 11, News Corp’s RendezView published a column I wrote about Kim Kardashian West. It was accompanied by an attention-grabbing headline: I Wanted Kim Kardashian To Die.

In less than 48 hours, there were articles about my column in The Washington Times and Cosmopolitan Magazine (US). Locally, my column was discussed on The Bolt Report, Mashable, The Guardian and SBS. And social media was ablaze with fire and fury.

I was the Australian columnist who apparently wanted Kardashian West murdered except for the fact… that I didn’t. 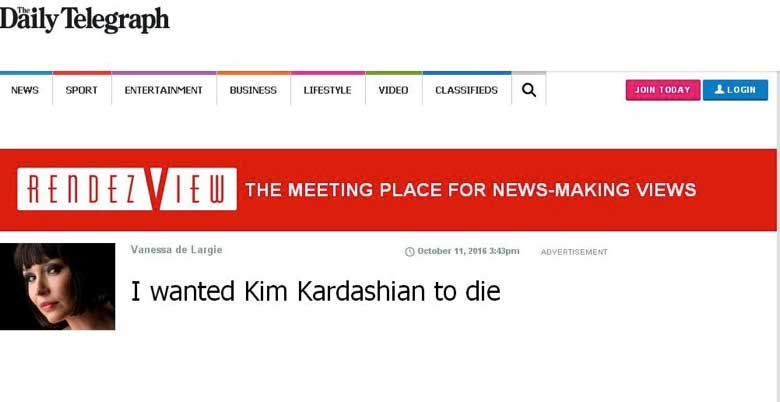 After a delightful public flogging which included threats of violence and death, verbal abuse, ridicule and online shaming which lasted for seven days, I took to my Facebook page to defend myself.

“The column has been misinterpreted,” I wrote. “In the beginning I state that my ‘initial’ thought was ‘Why couldn’t they have killed her?’ A fleeting thought, much like the thousands of thoughts we all think and discard every day. I decided to be honest about having that initial thought and exploring why myself and others in comments sections ‘may’ have felt that way. Obviously I don’t want Kim to die. I don’t want anyone to die. If you look at this page and my website and other articles, you will see, I am a decent human being. I am also a survivor of rape and [domestic violence]myself (which I’ve written books and columns about). But I just wanted to be totally honest and admit to this thought. Most people wouldn’t write about the thoughts they think.”

Scientists claim that the average human being has between 50,000 – 70,000 thoughts a day. And the majority of those we edit, discard or never vocalise.

Writers at the top of their game all share similar advice about the art of writing: Write honestly. Write what scares you. Write something that you wouldn’t want your friends or family to read. Write like a motherfucker.

I’m a writer. I wrote honestly about my experience. Was I shocked that I had this horrendous thought about another woman? Of course I was shocked, and I state this quite clearly in the second paragraph of said article.

I cannot change my truth. I had the thought, I confessed to having the thought and then I attempted to explore what led me to feeling this way initially.

There were those who tweeted, messaged and emailed their outrage to me. I was told that I could not begin to understand what Kardashian West had gone through. I admit that I’ve never been robbed at gunpoint, but I do understand what it’s like to be a woman and to have your power taken away from you by a stranger.

And I do know what it’s like to be pinned down and penetrated under a male weight, twice your size.

And I do know what it’s like to wonder if you will survive. I’ve lived it and I wouldn’t wish that kind of fear on anyone.

People admitted they hadn’t read the article but were still happy to jump on the bandwagon with the rest of the mob and throw shit at me based on the headline. Nowhere is the violence of mob mentality more prevalent than on the sewer that is Twitter.

You can feel the excitement building in people as they adopt a group dynamic and feel they can hurl abuse without being held individually responsible.

I was told repeatedly that I had no right to call myself a feminist. Apparently feminists aren’t allowed to write honestly about thoughts they have. The masses can metabolise lies better.

Wrap it up sickly sweet and you’ll be okay. That way you can avoid the outrage police and the gods and goddesses of self righteousness. Because these special beings don’t have improper thoughts. They are angels of purity with baby’s-breath wings.

Apparently my ‘Kim column’ wipes out all my advocacy work for women. It wipes out my articles, books, plays and spoken word about domestic violence, rape survival, endometriosis, slut-shaming and fierce female sexuality. Sixteen years of work just flushed down the dunny and my feminist badge ripped from my chest because I wrote a column about a thought that I had. 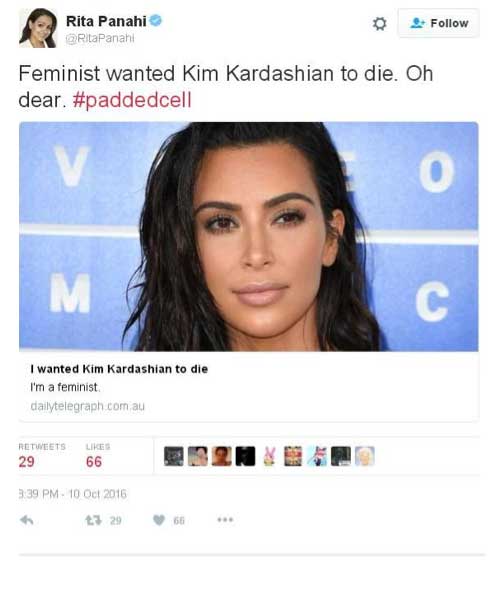 One tweet that gained traction was from Rita Panahi, who apparently writes a column for the Herald Sun. She added the hashtag #paddedcell when she shared my column. One can only assume Panahi believes I should be locked up in an asylum for writing my truth.

Which is ironic because apparently Panahi is a seeker of ‘truth’, going by her Twitter description which happens to be a quote by Winston Churchill: The truth is incontrovertible. Malice may attack it, ignorance may deride it, but in the end, there it is.

I was unfamiliar with Panahi’s work, but upon a casual glance it appears that she makes a living recycling Andrew Bolt’s talking points for an anti-feminist fanbase. But one can see from the conclusion of this Sunrise debate, when Rita tries to salvage her credibility with an irrelevant ‘sisterhood’ question, that she too is liable to elucidate on any irrational thought that pops into her head. Mind you, such a brain fart may be excused by the embarrassment she was experiencing at her floundering performance.

Other articles and blogs about my column state that I have an issue with Kardashian West’s sexuality and the fact that she takes nude selfies.

I upload numerous nude photos of myself to the internet so I would be the last person to berate her for that. I’ve appeared nude in numerous films and I also write incredibly candid articles about my own promiscuity.

I’m as sexually liberated as they come. Nowhere in my column do I allude to Kim’s sex-tape or nude selfies. I merely say: “Any human being who has the time and inclination to take 1,200 selfies a day, is lost on me.” And I stand by that statement.

On Saturday October 15, four days after my column was published, the hatred was beginning to die down. I was having a cruisey Saturday lunch with friends at a cafe, when a colleague texted me a screenshot of a tweet by Guardian journalist Amanda Meade. Meade obviously had nothing better to do on her weekend than search for me on Twitter, take a screenshot of my private twitter account status (which I had made private due to cyberbullying and trolling) and send out the following tweet. Due to the insidious nature of social media, in which complicated thoughts are reduced to soundbites as fodder for outrage, maybe it is best to play completely safe and say only the blandest things possible.

In 2015, Slayer guitarist Gary Holt took to the stage wearing a t-shirt that read: KILL THE KARDASHIANS. Why don’t you have a shot at him and leave me the fuck alone!

I was never very good at bland. Still aren’t, as it turns out.

Vanessa De Largie is an actress, author, writer and sex-blogger. Apart from New Matilda she's written for the Huff Post, RendezView, and Daily Life. You can follow her on Twitter at @VanessadeLargie.