They had one job: Count 24 million people in the National Census. But the Turnbull Government this morning looks like a deer caught in the headlights. Chris Graham breaks it down.

One of the most stunning things about last night’s spectacular implosion of the National Census is that it was being billed by the Turnbull Government as “the largest online event in Australian history”.

This morning, of course, it’s turned out to be the ‘largest online fail in Australian history’. Which makes the debacle that is the 2016 Census so much worse.

Because if you think about it, God only knows how many Australians had actually decided to boycott last night’s event over privacy concerns. Which begs the question, if a lot of Australians didn’t log on to the ABS servers last night, then how and why did they crash? 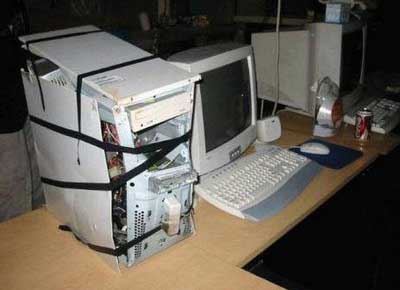 By 7:30pm, the ABS server probably looked a little something like the pic to your right, when about 1.3 million people had successfully completed the form.

There’s more than 24 million Australians, but only individual households participate. And there’s more than 10 million of those who were expected to try their luck online. So, best-case scenario, we managed to get about one-tenth of the way there, before everything went pear-shaped.

That’s a bit like lining up for the Olympic 100m sprint, bursting out of the blocks, and then pulling up 10 metres later for a cigarette and a good lie down.

Before we look at whose fault this is, it’s worth dwelling, briefly, on just how badly the ABS has fluffed one of the most important functions of government (ie. knowing shit about the people you govern).

After breaking with a 100-year tradition of anonymity and deciding last year to retain all the personal information of Census participants, the ABS chose the week before Christmas to let everyone know. Great time to host an important public debate (which of course never happened).

Unsurprisingly, it became a major issue a few weeks out from the Census, when everyone realised their previous anonymity would no longer be preserved.

In the midst of growing public angst, the ABS mailed out ‘online household codes’ to every household in Australia, in an envelope marked ‘To The Householder’. Which of course got thrown straight in the bin by a staggering number of householders. And that, coupled with a viral online freak-out that we’d all be fined $180 a day for every day we didn’t fill in the census form, sparked a massive influx of panicked calls to the ABS helpline. Which also crashed.

Bear in mind, the switch to online was designed to save the long-suffering taxpayers of this great nation money – more than $100 million, in fact. Sadly, precious little of that saving appears to have been spent on a public relations campaign to inform the masses, or, dare I say it, an IT system that could handle an online census.

Which leads us nicely to the part where we consider who should hang for last night’s #CensusFail.

Well, firstly, Michael McCormack. He’s the Turnbull Government minister responsible. Here’s a photo of him using a phone that works.

In his defence, McCormack has only been in the job a few weeks. But under the Westminster system of accountability, that hardly seems to matter. Here’s a link to his Twitter account if you want to tell him what you think.

Secondly, here’s a screenshot of where it all really started to go wrong. You might remember IBM from such scandals as ‘We implemented a new solution to improve Queensland Health’s payroll system, and it was two years late, $1.18 billion over budget, and had more than 35,000 problems.’

I’m not kidding. $1.18 billion over budget (not counting legal costs, which I’ll get to shortly) on a contract worth just $6.19 million.

Caitlin Fitzimmons, writing for the Fin Review, has a good break down of what is surely the greatest IT swindle in global history here.

She notes: “The Queensland government and IBM agreed to a seven-month time frame to implement the new payroll system, with a go-live date of July 2008.

“IBM stands by the work it did for Queensland Health, though anecdotally it seems that the affair has tarnished Big Blue’s reputation in corporate Australia.”

Well, it certainly didn’t ‘tarnish’ IBM’s reputation in the eyes of the Abbott Government, because it f you note the date on the ABS contract for the Census – October 2014 – that was quite some time after IBM had already screwed the pooch in Queensland, and after it became involved in a multi-million lawsuit with the state government to avoid having to compensate taxpayers for its monumental screw up.

And on that front, if you think we’re going to get any money back from IBM for what they did to the Census last night, you’re dreaming.

Here’s the story of what happened when the Newman Government tried to sue IBM over the health payroll debacle. Long story short, IBM had an iron clad agreement with the government that released it from damages if things went to custard. And at the risk of laboring the point, $1.18 billion buys an awful lot of custard.

All of this begs at least one really interesting question: What does the ABS contract with IBM say around the Census? If ‘Big Blue’ stuffs it up again, do taxpayers get compensated?

The short answers are us, no-one important, and we can’t.

In closing, it’s worth briefly looking back on the performance of the Turnbull Government thus far.

In a few months, Malcolm Turnbull has managed to lose a swag of seats after a double dissolution election, he’s delivered a divided (and likely toxic) Senate, plus a House of Reps that is one Coalition MP scandal away from being a deadlocked parliament.

He’s stuffed up the Royal Commission into juvenile detention, somehow making a Territory-based issue largely about the Commonwealth (honestly, how do you get that wrong?).

And now, his government has wrecked the Census, a crucially important event which plays a key role in guiding the expenditure of a few trillion dollars in taxpayer funds over the next five years.

Turnbull was only sworn in in mid-July. It’s August. September should be interesting.