Over the weekend, he won an Olympic Gold, took a swipe at a Chinese swimmer who tested positive for a banned substance. And now Mack Horton is at the centre of a monster social media storm, the root of which is hostilities within and against the largest nation on earth. Joshua M Roose explains.

As I have been sitting and analysing the outpouring of anger and hostility on the official Facebook page of gold medalist Mack Horton, I have had to ask myself: how is it, that in the space of less than 12 hours, a young man aged just 20, who lives just a suburb away and is enrolled in the university I work for, can go from relative obscurity to winning a gold medal at the Rio Olympics and being placed, temporarily, at the centre of geostrategic hostilities and nationalisms in the Asian region?

Like most Australians, I sat cheering for the lanky young man from Melbourne. I don’t follow the lead-up swim meets but I am an enthusiastic follower of Australian Olympic efforts.

The little chatter in the lead-up about Horton not respecting drug cheats and a fellow competitor who had previously tested positive seemed like relatively minor banter that typically acts as background for any race, particularly in light of many Russian athletes being banned from participation.

Like many, after a brilliant contest, I heard his post-race interview and enjoyed his forthrightness in stating of his run in with fellow competitor Sun Yang: “I don’t know if it’s a rivalry between me and him, just me and athletes who have tested positive.”

In the meantime, Sun Yang broke down in tears during an interview with Chinese television. The social media backlash began very shortly after. 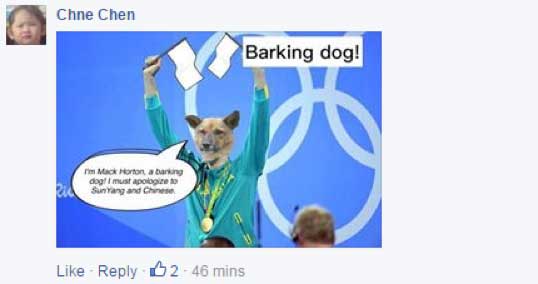 Within minutes, hundreds of Chinese Facebook users had inundated Horton’s page with vitriolic posts (many appear to be students in Western universities). They were joined shortly thereafter by posters from other parts of Asia congratulating Horton and taunting the Chinese posters.

The tone, aside from some angry defenders of Horton (including some racist comments) amongst Australians and those congratulating him, appeared to be one of bemusement and humor. In effect, Horton’s Facebook page became a proxy for competing nationalisms and contested claims across the Asian region. How did this occur? 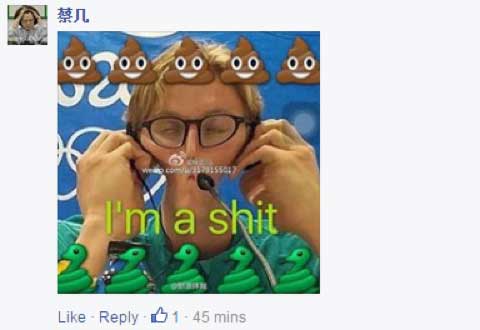 To the Chinese posters hostile to Horton, several themes were pervasive. Horton was berated for his ‘lack of respect’ for their hero, which within Chinese culture has a particular resonance with perceptions of historical racism and Western notions of superiority and disrespect of Chinese culture.

In this context, an attack upon one is an attack upon all. Mack was attacked for not understanding the nature of the drug use, represented by Facebook posters as medicinal (for heart problems) and as an accidental oversight.

The attack was sustained with many posters utilizing a news media image of Australian swimmers at the 2012 Olympics who had used the sedative Stillnox, a banned drug to illustrate perceived Australian hypocrisy.

Apologies were demanded by many. Other posters were less sophisticated, posting poorly edited photos of Horton accompanied by vomit and faeces emoticons. Others threatened violence. 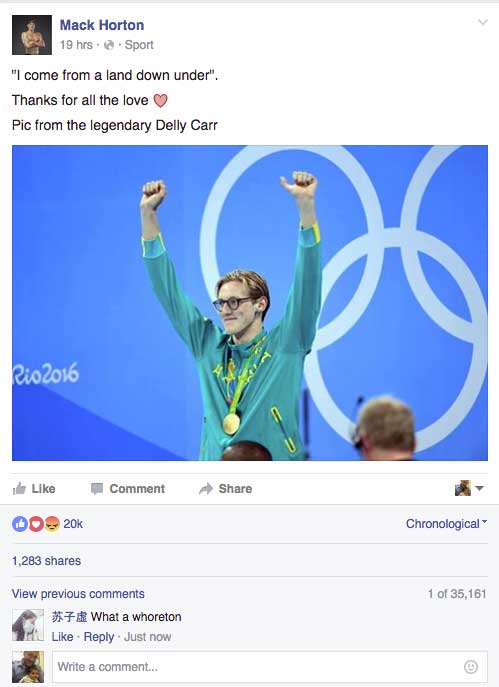 The posts were relentless (over 35,000 at the time of writing) and the controversy has spread to other social media platforms including Wechat. No sooner could one read the comments – many cut and pasted from previous messages – before 10 more were posted.

There can be no doubt that in Western culture, many of these posts constitute trolling and bullying behavior.

This incident raises a number of significant issues. Regional hostilities are on the rise. China has pledged to ignore the findings of the Permanent Court of Arbitration at The Hague on the illegality of its island building program in the Pacific as the nation prepares for war games with the Russians in the South China Sea.

The key themes of critiques of Horton on his Facebook page may be considered a proxy for the deeper underlying drivers of the Chinese approach. A sense of a lack of respect (and accompanying loss of national face) for Chinese culture and geographic claims accompany the perception of Western racism and a superiority complex.

As many of the more vitriolic comments indicate, there exists significant animosity, contempt and, indeed, hatred amongst at least some more nationalistic individuals and likely, factions.

A willingness to dehumanize a perceived enemy (in the case of Horton as ‘faeces’) presents evidence of the significant challenges facing the region.

Mack Horton has, through a stance many of us consider reasonable, become, albeit temporarily, the physical embodiment of the ‘arrogant, condescending west’ bent on undermining Chinese success.

Doubtless hostilities will soon pivot to another point of contention, as the Australian Foreign Minister Julie Bishop, who has also been the focus on considerable enmity by the Chinese media, may attest.

However the ferocity of such hostility between Facebook users in the region indicates the significant gulf between people in the region and the urgency of broader measures to open dialogue and cultural exchange in the face of increasing militancy.

This includes a greater effort to understand the cultural nuances of engagement in the region, and with Chinese students attending Western universities.

Dr Joshua M. Roose is the Director of the Institute for Religion, Politics and Society at the Australian Catholic University. He is a visiting scholar at the East Asian Legal Studies Program at Harvard law School and the Secretary of The Australian Sociological Association.