Most people who saw the way Aboriginal kids were being treated in Don Dale were horrified. Children being beaten, tear gassed, forcibly stripped naked, tied to a restraint chair and hooded like in Guantanamo Bay. For most people, the torture of children was a pretty straightforward issue.

Then the more aggressively unhinged writers at the Murdoch press started weighing in. Andrew Bolt, as one might expect, boldly led the way, starting by claiming that the story of the “torture of an essentially harmless boy” was “unfair” and “untrue”. He then went on the offensive, claiming that the real problem was the “public menace”, the ABC. By unfairly maligning the detention staff at Don Dale, it had “abused its power”.

Janet Albrechtsen weighed in next with her traditional thoughtfulness, in an article headlined “Deadbeat parents failed the Don Dale Detention Centre boys”. Not the authorities at Don Dale, or the politicians and courts who had legitimised the abuse of children. Albrechtsen argued that those outraged by the televised scenes in Don Dale “don’t even try to get close to the real issues”. Specifically, that the children were in jail because they were failed by their families. 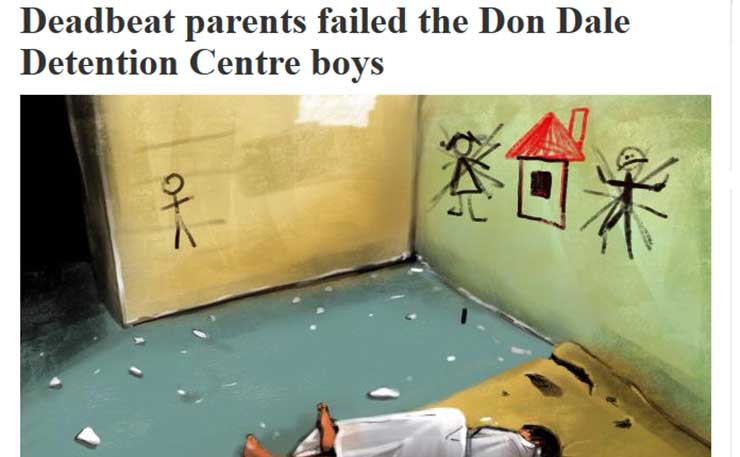 To bolster her position, Albrechtsen cited an interview she conducted with Marcia Langton. Langton complained about Aboriginal leaders failing to speak “about personal agency”, instead advocating “self-determination”. This “large population of victims… really need to be told: stop sitting around waiting for handouts.” The importance of “taking personal responsibility for raising your kids” was lost “amid the faux outrage”. Real leaders should start by “Making a call out to parents to lift their game”, concluded Langton.

Albrechtsen identified Langton as “one of our most courageous voices in this complex area”. Albrechtsen concluded that “the wrong kind of behaviour has become normal in many indigenous (sic) communities”, because of the “absence of those calls”.

Albrechtsen asked, “Who is protesting about the breakdown of parenting norms and parental responsibility? And at what point do parents say: ‘I am going to take responsibility for my kids’, rather than try to lay the blame on others?”

Perhaps Langton feels she was misquoted, or that Albrechtsen’s conclusions are different than her own. Yet Langton tweeted a link to Albrechtsen’s story, and expressed no reservations about how she was quoted.

Only a day later, Bill Leak’s cartoon came out. Like Albrechtsen, it shifted the spotlight from Don Dale and politicians in the Northern Territory, to Aboriginal parents who don’t care about their children. Langton indicated her anger at the cartoon on twitter. Albrechtsen, unsurprisingly, did not. She tweeted “Je suis Bill Leak. Shame on the perpetually outraged”. At time of writing, she is apparently planning on appearing on some TV show to defend the cartoon. Evidently, she regards its message as consistent with her analysis that the real problem is the “breakdown of parenting norms”, not the abuse of children by brutal guards.

Completing the circle, Bolt then gave space on his TV show to the “terrific columnist” Albrechtsen, to respond to the “persecution of Bill Leak”. Tim Blair blogged on the matter, approvingly citing the comments of Noel Pearson, Marcia Langton, and then posting Leak’s cartoon. The Australian editor-in-chief Paul Whitaker also defended the cartoon, stressing the need to address the “root causes and tough issues”. He too cited Langton and Pearson. The latter said “Blackfellas have got to take charge and take responsibility for their own children… That part of the message really struggles to get traction.” Whitaker was unable to quote Langton or Pearson defending crude racial caricatures.

Other inferior peoples who don’t love their children In July 2014, Bill Leak published a cartoon about Palestinians, as Israel bombed Gaza. The masked and armed father tells his child to “go out to play and win the PR war for daddy”.

This is a common trope of Israeli war propaganda. It justifies its murder of Palestinian children by claiming that Palestinian parents don’t really love their children, they use them as human shields and celebrate them when they die.

The claim that Palestinians who die are some sort of ruse to fool the West was even advanced during the war by Israel’s Prime Minister Binyamin Netanyahu. He claimed that Hamas “want to pile up as many civilian dead as they can… They use telegenically dead Palestinians for their cause. They want the more dead, the better.”

OTHER STORIES: A PUNTER’S GUIDE TO BILL LEAK, THE OZ AND THE COMPANIES THAT FINANCE THEIR RACISM

When racist claims become pervasive, that’s often because they serve functional purposes. Claims that Palestinians don’t grieve their dead, and that Palestinian parents don’t love their children, both work to justify Israeli massacres. If Israel kills 500 children, why does it matter? After all, if every death is just a clever ruse to get Western sympathy, and their parents don’t really love them anyway, those who sympathise at images of dead Palestinians aren’t being humane, but are really just naïve dupes.

In the case of Australia, why does it matter if Aboriginal children are being treated so badly in Don Dale, if their parents are the real problem? Why fret over brutalised children if the real problem is how they’re treated at home? Why blame white guards, when you can blame negligent black parents?

Why blame systemic racism, the failures of white governments, the accumulated traumas of colonisation, dispossession, massacres, the devastation of communities and removals from families, when you can just blame Aboriginal parents for their lack of agency and self-responsibility?

Why blame poverty, unemployment and lack of infrastructure if you can put all the blame on Aboriginal communities?

The freedom of speech scam

Doubtless, we’ll soon hear about how brave Leak is from the right-wing free speech brigade. Like Bolt, who recently threatened another defamation lawsuit against another journalist for criticising him. Or Tim Blair, who sued Crikey, and has threatened others with defamation lawsuits. Or Chris Kenny, who sued the Chaser team for making fun of him. Or Tony Abbott, who had a book by Bob Ellis pulped so that people couldn’t read particular passages Ellis wrote about him and others. Or that time Abbott lamented that he wasn’t yet able to ban Hizb ut-Tahrir for the seemingly trivial reason that they haven’t broken any laws.

Compare this to when Fairfax ran a cartoon by Glen Le Lievre which featured a caricature of a Jew watching Gaza being bombed. Aside from the outrage at the Murdoch press, then Communications Minister Malcolm Turnbull rang the editor of the Sydney Morning Herald to “lambast him for running an anti-Semitic cartoon”. Attorney-General George Brandis compared the cartoon to Nazi Germany, claiming that it “constitutes a racial form of stereotyping”. And what about freedom of speech? Chris Kenny explained “They ran a cartoon that reflected bigotry, people complained, they apologised… what part of free speech is compromised here?”

Why is Leak’s cartoon this week (or in 2014) an issue of freedom of speech, but the Lievre one wasn’t? The same reason it was okay to fire Scott McIntyre from SBS (supported by Turnbull, the IPA, Quadrant, Freedom Commissioner Tim Wilson, etc).

Freedom of speech is never invoked by those guys as an actual principle to be consistently applied. It is simply about shielding the powerful and well-connected. It is cynically wielded by a small network of right-wing cronies, the high-minded rhetoric to be invoked when defending a friend or colleague who has said something hurtful.

There are no principles, other than serving power, and spitting on the weak and marginalised down below.

Bill Leak’s latest caricature is just another illustration of this long Australian tradition.