The signs in Melbourne are not good for Labor, even if the Greens don’t take new seats off them this time around. Thom Mitchell reports.

The contrast between Alex Bhathal and David Feeney couldn’t have been starker, as they hit the hustings in Melbourne’s northern suburbs on Saturday. The Greens candidate hustled energetically for last minute support, while Feeney quietly proffered how-to-votes.

If the Labor powerbroker loses the seat of Batman, which has gone down to the wire, it will be a historic defeat. It has long been one of the nation’s safest Labor seats, and has been held by senior party figures since the late 1970s.

On Saturday, the Greens’ Alex Bhathal stood to make a different kind of history. If she defeated Feeney, she’d be the third Greens candidate to ever take a seat on the lower house benches.

It looks like Bhathal’s campaign will fall just short, but neither party are publicly calling it just yet. With postal votes yet to be counted, the Australian Electoral Commission has Feeney out in front on 51.62 per cent of the vote, and Bhathal trailing on 48.38 per cent after preferences.

Importantly though, Bhathal managed to outpoll Feeney on first preference votes. Even with the Labor candidate likely to take Batman, a catastrophic campaign has already consumed much of his political credibility, and seen a swing of around 9 per cent against Labor.

His failure to declare a $2.3 million negatively geared home, his confusion about Labor’s School Kids Bonus, and losing a copy of his talking points in a newsroom, have ensured his campaign was pockmarked with scandal from early on.

The fact that Feeney doesn’t live in the electorate he’s running for didn’t help him either, given the Greens’ candidates has lived and worked in the area for nearly three decades.

Bhathal has run for the Greens in Batman five times, beginning in 2001. A social worker by trade, she could hardly be described as a career politician; but she’s come up against a classic machine-man in Feeney, a Shadow Minister and heavyweight of Labor’s right faction.

At polling places around Batman on Saturday, many voters told New Matilda that they felt they’d been taken for granted, after Feeney was parachuted from the Senate into what was thought to be a safe seat in 2013.

Greens leader Richard Di Natale was out early with Bhathal, speaking Italian to the many nonnas who live in the solid working class electorate. Feeney concedes he has been fighting a “tough contest” but insisted nonetheless that his gaffe-riddled campaign had been “fun”.

It’s true that the Greens have targeted significant resources towards the seat, and not had to spread those resources around the nation in the way Labor has, but they’ve also attracted an impressive corps of volunteers. More than 600 people turned out to help on election day in Batman.

At the party’s election day celebrations on Saturday evening, hundreds of devotees watched excitedly as the results rolled in, and a second lower house seat came within clutching distance.

In the weeks before, they’d papered Batman suburbs like Fairfield, Thornbury, Reservoir, and Preston green with election material. The minor party says it has knocked on more than 30,000 doors in Batman alone.

Feeney maintains his campaign has also attracted “literally hundreds” of new Labor supporters, and had strong community links, but the red shirts looked lonely in a sea of Green at polling places on election day.

Handing out how-to-votes at Preston West Primary School, Feeney cut a lonely figure alongside state Labor minister Robin Scott and a party staffer. He points out he has enjoyed “enormous support” in his electorate from the likes of Tanya Plibersek, Penny Wong, Kate Ellis and Mark Butler; but in many ways that signifies the difference between the two candidates.

While Bhathal was working stumping for every vote in a grassroots campaign, and working lines of voters with an eagerness that bordered at times on desperation, Feeney was calling in some of the top brass of entrenched Canberra power and skulking towards a meagre victory.

In spite of this Labor star-power being trained on Melbourne divisions, Greens leader Richard Di Natale is right when he says “Victoria clearly is a powerhouse for the Australian Greens right now”.

“We have seen swings of [around]10 per cent to the Greens, in Higgins, in Wills, in Batman, and in Melbourne Ports, where it’s a three-way contest,” Di Natale said, suggesting at the same time the party could still snag a new Senate spot in Queensland despite losing some in other states. 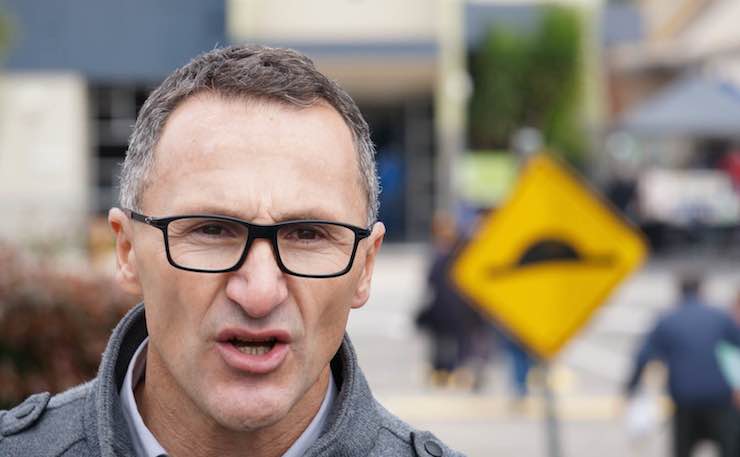 “Beware the next election: The Greens will take these seats from being marginal Labor and Liberal Green seats, to being Green held seats. And I suspect that if we don’t see … seats like Batman and Melbourne Ports fall over the line this time, certainly at the next one [they will],” Di Natale said.

It’s an argument that Feeney virulently rejected on Saturday. He told New Matilda the Greens are merely “a progressive voice howling into the wind,” and that he would be “a voice for this electorate in a government”.

“The juxtaposition between us and the Greens is that the Greens ultimately are a protest movement represented in parliament,” Feeney said. “They don’t have the capacity to deliver their promises.”

But as Di Natale hinted, it’s not just Batman where the major parties have faced major upsets. Conventional political wisdom in Australia is undergoing a serious shake-up.

Governments are coming undone after a single term; Greens are being elected to Nationals seats, as they were in New South Wales state election last year; and now the party is starting to threaten Liberal ones as well. Independents are also picking up record numbers of votes, and hung parliaments are becoming more frequent.

Indeed, despite Malcolm Turnbull’s determination to bring a ‘feral’ Senate crossbench to heel, his decision to call a double dissolution election has delivered an even more fractious Senate.

The 2016 election appears to support research which came out of the University of Canberra in late June, which found that satisfaction with Australian Democracy has crashed from 85.6 per cent under John Howard in 2007, to just 42 per cent under Malcolm Turnbull.

It’s clear people are looking for answers outside of the major parties. Whether the Greens will ever become “the natural home for people who’ve got progressive mainstream values,” as Di Natale would have it, remains uncertain.

They’re still only polling at just under 10 per cent of the national vote, and look set to trail Nick Xenophon’s fledgling flock in seats won, with Xenophon’s team poised to pick up two seats in the lower house.

Framed by the jaws of defeat late on Saturday afternoon, David Feeney said he’d leave the “commentary to the commentators” when asked how much responsibility he would personally take if he lost Batman.

Bhathal was more forthcoming, suggesting the precipitous crash in Labor’s vote had been fuelled by the fact “we’ve lacked a strong opposition in Australia for years”.

“When you elect a Green you get a strong, functioning opposition, basically,” she said. “It means that you have got people who will stand up for human rights, action on climate change, and for a properly funded health and education system.”

The Greens candidate did concede that it would be “very difficult” to attract government funds for local projects in Batman, if she were elected, because the government ultimately controls the purse-strings.

“But I don’t see that having 20 years of absentee Labor parliamentarians has benefited us greatly in this seat at all,” Bhathal said. “What I hear from people is that they are feeling pretty neglected.”

Whether or not Bhathal rallies in the final stages of the counting and knocks Feeney off as the local MP, that interpretation appears to have been vindicated.