One of the best predictors of future behaviour is past behaviour. Which is why you shouldn’t believe Bill Shorten’s promise on Q&A last night that he would consider a treaty if elected to government. Chris Graham explains.

The big news this morning is that Bill Shorten has left the door open to negotiating a treaty with Australia’s First Peoples if elected Prime Minister on July 2.

And if you watched Q&A last night, that certainly appears to be what Shorten promised. Sort of. More or less. Maybe.

Here’s how it happened.

In the shadow of a federal election, Shorten braved a live ABC audience – 38 per cent Coalition, 34 per cent ALP, and 13 per cent Greens according to the Q&A website – for a one-on-one with mercurial host Tony Jones.

Initially, it all seemed to be going swimmingly. Robot Bill had learned his talking points well, and despite over-ennuciating just about every sentence, was able to relax a little and wax lyrical on all things education, the budget, the NBN, and all manner of Labor election promises.

And then halfway through, things got a little… tense.

Turns out there was also a blackfella lurking in the crowd… specifically, Mr Doug Delaney, of Penrith.

Doug had a question for Bill. And it wasn’t a particularly welcome one.

DELANEY: Do you disagree with the NSW University view that this country wasn’t settled but invaded by the British in 1778?

Shorten dutifully scribbled notes as the question came, because of course he’d just been asked the world’s most complex question, and needed reminders in case he got distracted by his own answer.

Only one problem: the question was brief, not at all complex, and Shorten only feigned writing notes for a second or two… which means he scribbled one word, two tops.

Before we get to his response, it’s worth delivering credit where it’s due – to the Q&A team for organizing the question, and to Tony Jones for the subsequent dogged pursuit of Shorten, into a corner from which this morning, Shorten is strill trying to extract himself.

And now over to Bill, who decided to do what he does best… dumb things down with what might appropriately be called ‘the parent defence’.

SHORTEN: “If anyone says that Aboriginal people weren’t dispossessed from their land by the British settlement they’re telling lies.

Here, here. But not even close to answering the question… and Tony Jones wasn’t letting him get away with it.

JONES: So would you describe this… as an invasion?

SHORTEN: I tell you what, if I was Aboriginal, I wouldn’t exactly call it a welcome.

JONES: I’m asking you what you call it? … I’m just going to go back to the original question because I want to hear an answer about whether you regard the British coming to this country as an invasion?

SHORTEN: If I was an Aboriginal or Indigenous person, yes I would.

JONES: If you were you?

SHORTEN: Well, my parents, my ancestors came out here as convicts, so I don’t feel the convicts were part of the invading force, if that’s any good. They didn’t have any choice coming here either.

Which is actually true. And which begs one big, uncomfortable question: if many Australians are descendants of convicts, why do we have such a difficult time accepting the facts of invasion? Why can’t we just say, ‘Yeah, the British were bastards. Even to their own’.

Everyone wins, no-one gets hurt. Except the British. 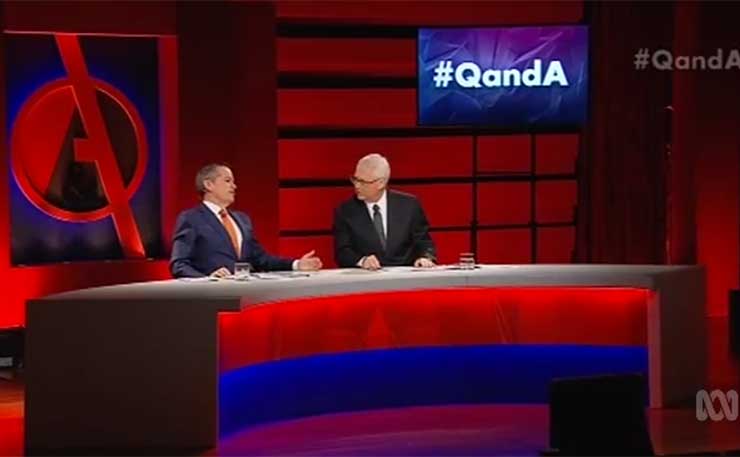 And this is where things got even more awkward for Shorten, because Jones could sense some blood in the water… and so he went to work opening up the wound.

JONES: Sorry, is that something you might move towards in government, a treaty?

SHORTEN: Well what I’ve said, again, I just have a sense Tony, maybe you think I’m being a bit harsh on you, that’s there’s a little a bit of ‘gotcha’ going on here.

Nawwwww. The big bad man asked Bill whether or not he supported a treaty.

Jones fired back: “No, no it’s not gotcha. It’s a question based on what you just said. When you said yes, I assumed certain things.

SHORTEN: Yeah. But you can. I think you were just surprised to hear me say ‘yes’.

As was I, as were many people, no doubt, who were watching Q&A. All of which explains why Shorten – at this point, rocking back and forth in his chair – looked like he’d just been caught diddling his travel allowance on national television.

Entertaining repartee aside, what just happened is that the Opposition Leader left the door wide open for moving towards a treaty if elected to government. Which is obviously significant, even if unintended.

But what also happened is that Bill Shorten just told a national audience that he’s amenable to negotiating a treaty with Australia’s First Peoples, even though he doesn’t accept that an invasion actually occurred.

In which case… why sign a treaty, if there was no invasion?

Well, because a ‘dispossession’ occurred. How remains unclear. But it definitely was not preceded by an invasion… at least not an invasion by Bill Shorten’s ancestors.

Shorten’s excruciating twists and turns in order to avoid a simple answer to a simple question sum up very well the sensitivities of Australian leaders on the ‘t-word’.

In Shorten’s defence, he knows that as a nation, we can’t have a sensible debate on this issue, because anything he says will be exploited by political opponents and media, and used as a race wedge.

But that’s actually only half the problem.

The other half is an abject failure of Australian leaders to forge ahead with that debate, regardless of how it might be spun by mainstream media and shock jocks.

Indeed, since Bob Hawke in the 1980s, Aboriginal people have been let down by a succession of spectacular failures of leadership.

It was Hawke who promised a treaty in 1988, when he visited the Northern Territory. A few years later, he wept as he hung the Barunga Statement – which explicitly called for treaty – in Parliament House, lamenting that he couldn’t have done more for the blackfellas.

Hawke also promised national land rights. He didn’t deliver on that either.

Paul Keating did deliver the Redfern Speech… followed shortly after by the Native Title Act, which was then gutted by John Howard, whose party was promising ‘bucketloads of extinguishment’ of native title.

Howard went on to abolish ATSIC and deliver record budget surpluses worth more than $100 billion, while at the same time ripping funding out of Aboriginal affairs.

The poverty you se in black Australia could have been eradicated a dozen times over in Howard’s era. It wasn’t.

As a part gift, Howard launched the Northern Territory intervention (with more than a little help from Tony’s Lateline program, ironically), which was then run for the next few years by the Rudd Labor government.

For his part, Kevin delivered a National Apology which he has dined out on ever since… all the while expanding the disastrous NT intervention, and reneging on a promise to move the date of Australia Day to a move appropriate date.

Enter Julia Gillard, who extended the NT intervention by a decade, and then used her first Close the Gap speech as Prime Minister to blame Aboriginal people for their poverty.

And then we come to Tony Abbott, whose words, such as ‘nothing but bush’ and ‘lifestyle choice’, were the least offensive parts of his engagement with black Australia.

He wrecked Aboriginal affairs by moving the entire portfolio into Prime Minister and Cabinet, and then launched the disastrous Indigenous Advancement Strategy which gutted Aboriginal organisations around the country.

It will take at least a decade to recover from Abbott’s very brief reign.

The only Prime Minister since Hawke who hasn’t yet failed Aboriginal people is Malcolm Turnbull, and that’s simply because he hasn’t had enough time.

Which brings us neatly back to Bill Shorten, and the reality that there’s absolutely no reason to believe he – a party loyalist with no history of advocating strongly for the rights and interests of First Peoples – will be any better than the rest of them.

Despite Shorten’s ‘gotcha’ moment, and his fumbling and fuming, Australia will one day sign a treaty with our first peoples. It’s inevitable.

The question is, which political leader is going to have the courage to forge the path.

As Noel Pearson once stated of John Howard (as a mob of blackfellas turned their back on him during a reconciliation convention in 1997), ‘I don’t think Australia, at this juncture, has the leadership to take us to [treaty]in [2020], regrettably.’