With the electoral roll closing on Monday, hundreds of thousands of eligible Australians have been excluded from voting on July 2. Instead of chastising those disengaged from electoral politics, there are easy steps that could help lower that number over night, writes Max Chalmers.

In the days before the Australian Electoral Commission closed its Commonwealth roll, a tone of desperation fanned across both traditional and social media. With the countdown on, one BuzzFeed news headline captured the vibe succinctly: “Stop What You’re Doing And Enrol To Vote, It Takes Four Fucking Minutes”.

A full 40 days out from the opening of the polls, the triennial closing of the roll was accompanied by a frantic effort to encourage voters to enrol or update their details with the Australian Electoral Commission (AEC). Its genesis may seem mundane, but the panic was well justified.

Of the total population of eligible voters in Australia around 6 per cent were not enrolled as of April 30. But the corresponding numbers for young people are significantly higher. Almost half of 18-year-olds remained absent from the roll by the end of last month.

In an alarming press release issued less than a week out from the closure of the roll, the AEC estimated just 58 per cent of Indigenous people had signed up to vote.

Australia may like to think of itself as worlds away from the US’s bitter waring over voter restrictions, but a sizeable and politically significant portion of the electorate still goes missing every three years. According to an estimate produced by Y Vote, a non-partisan start-up hoping to encourage young Australians to vote, youth voter turnout alone could swing a number of key seats. By way of example, Y Vote predicts that “wasted” youth votes in the bellwether seat of Eden-Monaro could end up being three and a half times the current margin between Labor and the Coalition.

With the numbers as they stand, it’s hardly surprising that the AEC has been pushing for last minute enrolments, while youth targeted publications and media hubs like Junkee and friendlyjordies (a producer of viral comedy videos who recently paired with the ACTU to help get the union message out to a young audience) have made their own attempts to encourage followers to enrol.

In less sympathetic outlets the message comes with a none-too-subtle waft of blame: these millenials, the same ones who refuse to be able to afford a house, who ungratefully decline unpaid work, can’t even be bothered to vote.

But between the outright intergenerational hostility and the well intentioned ‘get out the vote’ campaigns, Professor of Political Sociology Ariadne Vromen worries the bigger picture is being missed.

A University of Sydney academic with a strong interest in young people and politics, and also a frequent tweeter, Vromen was left frustrated as she watched appeals to enrol ricochet across the internet.

“A lot of the people who are commenting at the moment on Twitter, and in general in the newspapers, they do so from a highly politically engaged, highly politicised standpoint,” she says. “It’s very difficult for them to try to put themselves in the shoes of other people for whom politics isn’t an everyday interest.”

Electoral authorities insist it is the duty of the individual to keep their information up to date. But if we really want to change the game, Vromen argues, there are a number of structural changes that would increase the number of people voting virtually overnight.

The first is voting day enrolment, a technique that has proved popular in other jurisdictions.

In Canada, eligible citizens who make their way into a booth on election day can cast a vote, provided they flash the appropriate identification. Same goes for New Zealand and a number of states in the US. And then there’s NSW and Victoria.

While it is argued that allowing people to enrol on the same day as they vote would create an overwhelming administrative burden for electoral authorities or enable voter fraud, both of Australia’s biggest states already do it.

Ben Raue, an analyst at progressive advocacy group GetUp, says poling day enrolment has made a significant impact in NSW at recent state elections. Figures provided by the NSW Electoral Commission show why. In 2011, 20,960 people in NSW voted after enrolling on election day. Without the reform, they would have been excluded. That number more than doubled to 41,978 at the 2015 poll.

At the 2006 Victorian state election, 66,807 people who were not on the rolls and tried to vote on election day were barred from doing so. “The people turning up to voting centres are making a genuine attempt to vote,” a report by the Victorian Electoral Commission noted in 2009. “Overwhelmingly, they are people who have been enrolled in the past, have been taken off the roll by objection because they have failed to update their enrolment when they changed address, and who are unaware of this fact or who want to avoid a fine.”

So the state updated its laws, allowing enrolment at polling places on election day. At the 2014 state election around 50,000 Victorians were able to cast their vote thanks to the new measure.

Dr Jill Sheppard, a lecturer at the Australian National University who has examined why people abstain from voting in Australia, says that despite the increased administrative burden, same day enrolment and voting is worth a shot.

“There is evidence from some American states that it does seem to increase total enrolment and total voter turnout,” she says.

Raue adds that an increased reliance on digital technologies makes it less of a hassle than it once would have been.

Encouraged by its famous 2010 High Court win striking down Howard-era restrictions on voter enrolment, GetUp recently tried to force the issue again, backing another case which would have effectively made voting day enrolment the national standard. Under the current rules, voters have seven days from the issuing of the election writs to enrol.

Both Vromen and Raue see this as insufficient. There can be a lengthy gap between writs and voting day, and those who are disengaged five weeks out may well take a closer interest once the national frenzy reaches its peak just before July 2. Why bark at people to enrol and then bar them from doing it at the very moment they most desire to?

Though the ethical and political arguments for reform seem strong, the High Court found polling day enrolment is not demanded by the Constitution. Unlike its surprise 2010 victory, the recent GetUp challenge failed. Any reform will require legislation.

Beyond extending the time period in which people can enrol there is another potentially more powerful measure proponents say would put downward pressure on the number of unenrolled voters. It’s what the AEC calls ‘direct enrolment’, but could also be described as auto-enrolment.

Thanks to the former Federal Labor government the AEC already uses this measure, to an extent. When you update your driver licence, Centrelink, or Medicare details, the information (eventually) trickles back to them. If the AEC has enough data to cross-reference your new address, they update your enrolment for you, sending a letter providing the opportunity to opt-out. If they can’t cross-reference, however, it’s up to you.

As the AEC data below shows, both the number and rate of enrolments is now heading in the right direction. By Monday afternoon the AEC estimated the number of unenrolled eligible voters would finalise at around 940,000 for this election, down from 1.2 million in 2013. Improvements to online enrolment as well as direct enrolment have no doubt helped. 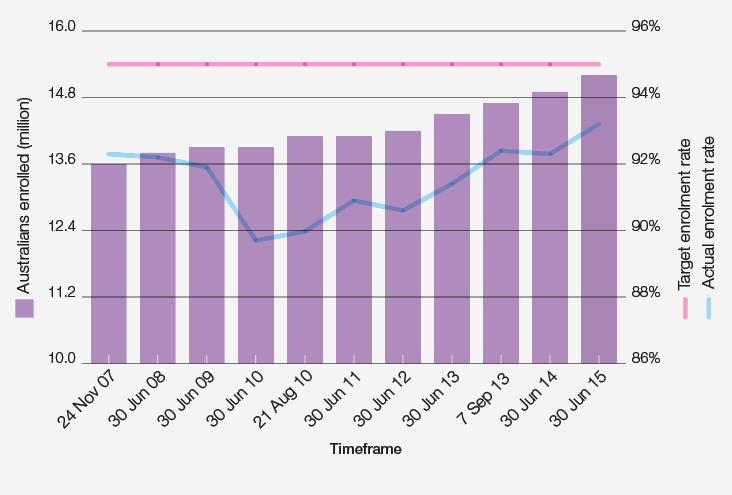 “The AEC has been really good over the last four or five years in that they are shifting towards making it easer and easier for people to enrol,” says Vromen.

Since the introduction of direct enrolment by the Feds, a similar trend can be seen among younger voters. 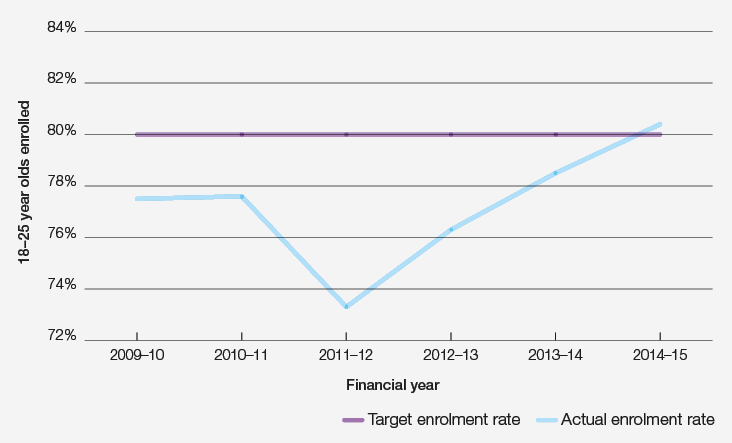 But once again, critics compare the Federal system unfavourably to the approach used by NSW and Victoria. Unlike the AEC, for example, the NSW Electoral Commission pulls data from the state-based Board of Studies. If you’re a young Australian who doesn’t drive, and doesn’t receive direct welfare payments, that makes it a whole lot more likely that you’ll be automatically enrolled.

As Greens Senator Lee Rhiannon has previously noted, there can be a marked discrepancy between state and federal enrolments, ostensibly enabled by the fact the AEC doesn’t simply copy across from the state database. By September 2015 there were around 145,000 more people on the NSW roll than on the equivalent Federal roll. The Feds, it seems, are setting the bar higher than their state counterparts.

The issue of auto-enrolment is a balancing act for the AEC. On one hand they need to maintain the integrity of the enrolment database. On the other, they know that with every extra check or precaution, real life voters can miss out on election day.

In the past, the Coalition has tried to influence this balance by extracting a political argument from the practical problem. When Labor introduced direct enrolment in 2012, Christopher Pyne accused the party of engaging in an electoral rort.

“If an attempt to change the current enrolment system is to be labelled a rort,” wondered ABC election analyst Antony Green, “then why shouldn’t attempts to maintain the status quo, and its steady decline in youth enrolment, also not be seen as a rort?”

Someone more cynical than Green would push that case further. The young voters Howard tried to lock-out by tightening enrolment restrictions weren’t exactly his greatest supporters. Even with Wyatt Roy and James Patterson in parliament, you wouldn’t expect young Australians to flock to the Coalition in 2016 or beyond. It makes sense politically that they would try to keep young people from voting.

Aside from improving data sharing between jurisdictions, less technocratic solutions to overcome the enrolment problem have also been floated. One solution proposes allowing 16-year-olds to vote. This obviously offers Australians an increased reward for engaging with politics from a younger age, but it also makes them easier to enrol in the first place, given they’re largely contactable at one place (school), and are less likely to have started bumping between sharehouses and rentals.

Needless to say, there’s more to engaging young voters than putting them on a roll. A 2014 Lowy Institute Poll regularly cited by Y Vote found that just 42 per cent of 18-29 year-olds believed democracy to be preferable to any other form of government. Reread that in the year that Donald Trump became the Republican Party’s presumed Presidential nominee, and the statistic looks all the more disturbing.

Skye Riggs, founder and CEO of Y Vote, points to three main causes of youth electoral disengagement; the belief that politicians don’t listen, the expectation their vote won’t make an impact, and the feeling that none of the candidates are really preferable.

Untangling that distrust is a distinct issue, one likely made all the more complicated by the chastising of millenials by their seniors.

And though a few more viral ‘enrol already’ videos would hardly go astray, Vromen says it’s important not to let go of the structural critique.

“How do we change political institutions to make it easier for all Australian to participate to ensure political equality? That, I think, has to be the really important question,” she says.

“I’m really uncomfortable with these accusations that young people are apathetic, or they’re slack, or they’re uninformed. I think those are misguided.”