Michael Brull looks at the rise of racism in the Republican Party, in particular that directed at Jews.

Donald Trump’s overtly racist comments – about Muslims, Mexicans and so on – have gotten plenty of attention. But what about Trump and the Jews?

Trump’s recent reaction to supportive comments by David Duke, formerly Grand Wizard of the Ku Klux Klan will likely have many Jews feeling anxious. As American Jews tend to be liberal and vote Democrat, plenty already had reason to not like Trump’s overt bigotry.

Yet Duke’s racism isn’t just directed at other groups. Duke and the KKK both have long records of vicious anti-Semitism.

That isn’t just racism directed at others. Jews are reasonably well assimilated into American cultural and political life. Whilst the “Southern Strategy” and race-baiting towards other minorities may be a familiar form of modern American politics, Jews are traditionally insulated from those types of campaigns. This is partly because of the deep pockets of some Jewish organisations and businessman.

For example, many observers expected Jewish billionaires Haim Saban and Sheldon Adelson to have enormous influence over the nomination process and presidential candidates from both the Republicans and the Democrats.

Hillary Clinton made her pitch to Saban and Jewish organisation leaders with a letter promising support for Israel and opposition to BDS, and has continued to promise to bring Israel and America closer.

Donald Trump has made a point of stressing that he doesn’t need to take other people’s money to run for president, because he’s already so rich. So when he appeared before the Republican Jewish Coalition, he said “You’re not going to support me because I don’t want your money”.

According to Zaid Jilani, Trump said that Jeb Bush did what he was told by his donors: “That’s why you don’t want to give me money, OK, but that’s OK, you want to control your own politician. That’s fine, good”.

To some, this may sound a bit like what Bernie Sanders says all the time: that he is concerned that “a handful of very wealthy people and special interests will determine who gets elected or who does not get elected.”

Yet Trump’s comments made some Jews uneasy. Claiming that Jews want to “control” politicians echoes ugly stereotypes from earlier eras.

Trump also said to the Jewish crowd: “I’m a negotiator like you folks were negotiators… is there anyone in this room who doesn’t negotiate deals? Probably more than any room I’ve ever spoken.”

The Times of Israel headline was: “Trump courts Republican Jews with offensive stereotypes”.

It may be the tone, delivery, or the additional stereotypes that made Jews suspicious of Trump. It seems there’s a fine line in discussing the influence of wealthy Jews in American politics.

For example, New York Magazine had a lengthy story headlined: “Sheldon Adelson Is Ready to Buy the Presidency”.

I am not aware of a backlash against the story. It may sound like an ugly stereotype, but the fact is, the super-rich do have enormous political influence in America.

Not all of the super-rich are Jews, of course, but some are. And those with means and political inclination use their money to influence politics, just like non-Jews do.

The concern about Trump is that he singled out Jews, speaking as though he had an insider knowledge about us, about our nature and about how we think.

It wasn’t enough for Trump to get any major denunciations. But it was noticed by some. For example, Louis Farrakhan, leader of the Nation of Islam, said that when he sees Trump, “I like what I’m looking at”.

Farrakhan has made his opinions about Jews very clear. His comments about the “Synagogue of Satan” are equal parts hateful and nuts. Yet the way he picked up on Trump’s comments about Jews wasn’t insane. And while it’s hard to know if this kind of appeal was Trump’s goal, it is hard not to notice that that is the effect of standing before Jews and telling them that they can’t buy you.

Nathan Guttman in the Forward reported that Jewish Republicans are feeling nervous about Trump. Guttman observed that they hadn’t united against Trump, despite his “failure to condemn dedicated anti-Semites and racists and his declaration that he would be ‘neutral’ on Israel.”

Some still back Trump – and imagine he would be a strong supporter of Israel. Others are worried about making an enemy of Trump, given the possibility of him ending up President.

Another worry might be that denouncing Trump for politically incorrect comments about Jews won’t necessarily get them very far. Conservatives have been saying how awful Trump is for a while, and it has zero negative effect on his campaign.

Since Trump has shown the effectiveness of saying the outrageous, Republicans have competed in political incorrectness, relishing the ensuing controversies. Trump’s unpredictability means that if he got into a fight with Jewish organisations, who knows what he might say next?

Some may remember Trump’s fight with American comedian and former Daily Show host Jon Stewart in 2013. Trump tweeted that he didn’t like “Jonathan Leibowitz – I mean Jon Stewart”. Trump then continued his criticisms after Jon Stewart called him “Fuckface Von Clownstick”.

Trump queried that if Stewart was “so legit”, then “why did he change his name from Jonathan Leibowitz?” He explained that Stewart “is a total phony – he should cherish his past – not run away from it”.

Trump constantly stressing Stewart’s very Jewish and long-discarded birth name seemed to suggest that there was something suspicious about a public figure not being totally upfront about his Jewishness. Reports speculated that there was a “veiled anti-Semitic” element to Trump’s insults. However, the controversy died down quickly enough. It was brought to the public’s attention most recently in British comedian John Oliver’s hilarious takedown of Trump and his stubby fingers, which everyone should watch.

The fact that Trump can so quickly and casually turn on Jews is no small fact. Trump has built his campaign on rejecting political correctness, so why shouldn’t he ignore the feelings and concerns of Jews? So far he’s just restricted himself to dog whistles.

The Jewish Press reported that “Trump’s critics have for months been raising the issue of the strong support Trump enjoys among racist groups.” Mark Potok, senior fellow at the Southern Poverty Law Centre, said that Trump “repudiated these groups, but only in the most milquetoast way imaginable”.

Failing to repudiate anti-Semites might have sounded politically insane a few years ago. Yet it may make more political sense than one might think.

The constituency of people who want to keep Muslims out of America are probably many of the same people who think David Duke makes sense. The same people who just want to ‘Make America Great Again’, and are sick of Jews ‘controlling’ American politics, and suspicious of a public Jewish figure hiding his Jewishness like a phony.

These kinds of things in election campaigns matter. Dalia Mogahed, former Executive Director of the Gallup Centre for Muslim Studies, explains that “levels of anti-Muslim sentiment follow trends in domestic US politics, not international terrorism.”

For example, Mogahed surprisingly found that from March 2001 to November 2001, American public opinion of Muslims improved, with Americans regarding Muslims more favourably and less unfavourably. September 11 wasn’t followed by a spike in Islamophobia. 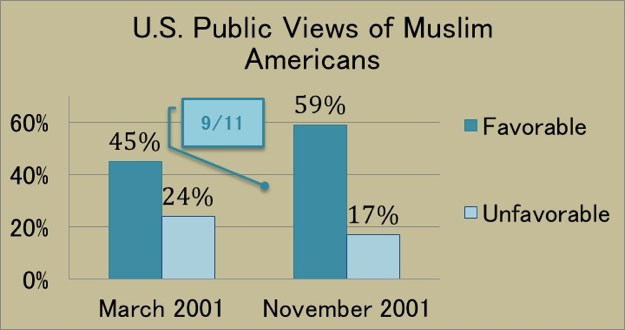 Spikes in this view occurred among Republicans during the 2008 and 2012 presidential elections. 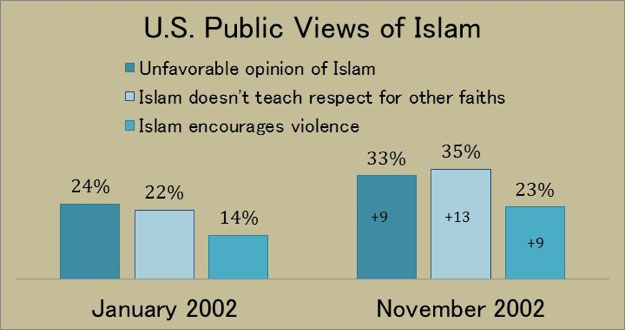 The point is: what Trump says during the election campaign matters. If he gets into a fight with Jewish organisations, his rhetoric may become as ugly as that directed at other groups. It would legitimise anti-Semitic bigotry, which has been restricted to the fringes of American life for decades.

Elections have shown themselves to be the time when minorities can most effectively be demonised in the public’s eyes. Jewish organisations might therefore think they are being prudent by sitting out this fight for now.

Yet as seen, the problem with this is that anti-Muslim sentiment doesn’t only target Muslims. Trump may have come for the Muslims first, but it would be foolish to believe that that’s where he will finish.