Activists have begun a campaign of mass civil disobedience to stop New South Wales’ largest proposed coal seam gas project, and a 71-year-old ‘nanna’ has been amongst the first arrested. Thom Mitchell reports.

Anti-coal seam gas campaigners are stepping up efforts this week to block the largest unconventional gas project proposed for New South Wales, vowing to wage a campaign of mass civil disobedience to protect the Pilliga Forest and Great Artesian Basin from the controversial industry.

Coal seam gas company Santos plans to develop an 850-well gas field in the Pilliga Forest, near Narrabri in north west New South Wales, but a permanent blockade camp has been set up to hinder exploration and construction works.

Yesterday morning the arrest count rose to 11, with three ‘Knitting Nannas’ taken away by police for locking themselves to the gate of a Santos facility. 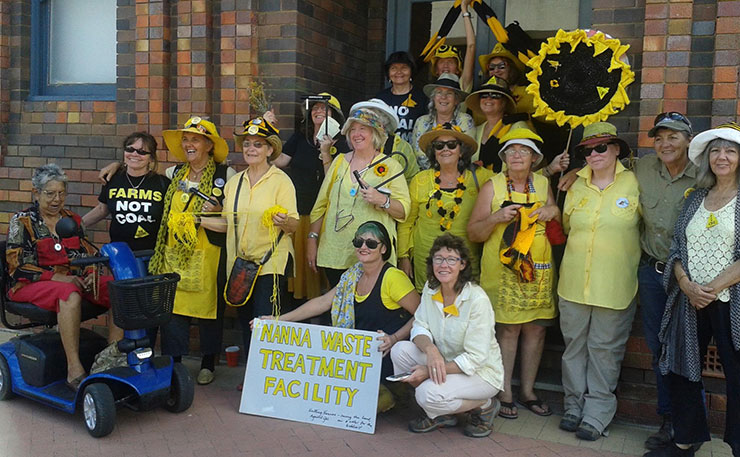 Organisers said there’s currently up to 200 protestors in the area at the moment, as part of a weekend of actions geared at building a movement similar to the years-long effort to save the nearby Leard State Forest.

That struggle, to block Whitehaven Coal’s Maules Creek Mine, was similarly coordinated from a blockade camp, and while it ultimately led to the arrest of more than 350 people, Whitehaven Coal has nonetheless uprooted large tracts of the Leard forest.

The protestors pitting themselves against Santos see coal seam gas as a death-knell for the Pilliga, and they’re determined to stop the company in its tracks early on. They ramped up their mobilisation in December, when the company started construction of a reverse osmosis plant to process water used in mining on its Leewood property.

“Community from the local region and around New South Wales came together to draw attention to what is happening in the Pilliga and Santos’ further plans for the Narrabri Gas Project,” said Naomi Hodgson, of the Newcastle branch of the Wilderness Society.

“The construction at Leewood was the first action that Santos has undertaken for over a year, because they put the project on ‘go slow’,” she said. “So protest activity has been minimal over that period, but the recent works at Leewood have provided a target and an opportunity to express that concern.” A spokesperson for the group, Judi Summers, said there were 15 Knitting Nanna branches across New South Wales and that they are “all willing to come out to the Pilliga and do what the three nannas did today”.

“There’s basically a commitment to do whatever it takes to stop CSG mining, whether it’s Santos, AGL or Metgasco,” she said.

“The reason we’ve come to the Pilliga is this is where the recharge mouth of the Great Artesian Basin is, and we’re very, very frightened the 850 wells they’re going to be drilling and the millions of litres of waste water they’ll be processing on a daily basis will pollute the groundwater.

“As nannas, we’re very conscious of the fact that if the Great Artesian Basin is polluted, that is the water for future generations. We can’t have that [and]we’re willing to travel wherever we have to go to stop CSG,” Summers said.

In a statement to New Matilda, Santos General Manager of Energy NSW, Peter Mitchley said that “claims of Santos’ Narrabri Gas Project having detrimental impact on the Great Artesian Basin are fundamentally incorrect”.

He said that in the area Santos plans to mine, the Great Artesian Basin lies between 50 and 250 metres below the surface, while the coal seams which will be targeted for gas are between 500 and 1,000 metres underground.

“Independent and publicly available studies by the CSIRO and Geoscience Australia concluded there is a lack of connection between the Great Artesian Basin and the coal seams,” Mitchely said.

For many, though, the risks are still too great. During the 2015 election campaign the New South Wales Labor party joined the Greens in vowing to banish Santos from the Pilliga, as the expanding coal seam gas industry became a central political issue credited with massive swings in affected electorates.

Continuing the party’s long-running support for anti-fossil fuel activists in the region, New South Wales MLC Jeremy Buckingham voiced his support for the three Knitting Nannas arrested yesterday on social media, while Federal Senator Lee Rhiannon expressed her solidarity with a mass ‘walk on’ at the Leewood site on Sunday.

“It was an occupation of the Leewood site which officially is Santos’ private property,” said Hodgson, from the Wilderness Society.

“Around 130 people walked onto that property [and]occupied the site for several hours while there was ceremonial activities undertaken and performed.”

Always was, always will be Aboriginal land: #Santos has no right to be here #PilligaPush pic.twitter.com/a1r1FkZl0C

Nathan Leslie, a Gamilaraay descendent opposed to the project, said there was widespread concern amongst Aboriginal people with a connection to the Pilliga, and that the community had not been properly informed about risks associated with the coal seam gas industry.

“They only tell them about the benefits – the economic – so they’re not really being open with that conversation,” he said.

New Matilda is waiting on comment from the Narrabri Local Aboriginal Land Council, but understands there are also traditional owners who support the project.

Mitchley said that Santos meets regularly with native title applicants with an interest in the area, that the company has a good relationship with the land council, and that it is engaged in “constructive dialogue”.

New South Wales police media confirmed police are aware of the activity at the Leewood facility on Sunday, but said that at this stage no further action had been taken.

It’s understood police did not attend the scene, but if Santos pushes ahead with its project, a protracted battle between blockaders and the fossil fuel industry is likely.

Hodgson said that, with construction on the Leewood facility expected to wind up in mid-February, “we basically have one extremely important month to make a powerful statement that any major infrastructure works associated with the CSG industry in NSW will be resisted”.

“We’re viewing this particular construction as an opportunity to make that point,” she said.