The scheme could cost up to $250 billion by 2030. Based on the second round of auctions held yesterday it won’t work. Thom Mitchell explains.

In contrast to the carbon tax, or an emissions trading scheme, the government’s policy is a drag on revenue and not a source of it. So taxpayers are footing the bill when the government enters into contracts with companies that promise to abate their greenhouse gas emissions.

This time, we got 45.5 million tonnes of carbon abatement for an average price of $12.25 per tonne. It’s a slight improvement on the first round of ‘reverse auctions’ – which involve companies competing for contracts to abate their emissions at the lowest price – when the government awarded contracts for 47 million tonnes of emissions reductions at a price of $13.95 per tonne.

Together, that makes for a total of 92.5 million tonnes of abatement purchased under the policy so far, or just under 40 per cent of the 236 million tonne ‘abatement task’ Australia faces if it’s to meet its targets for 2020. The government has committed $2.55 billion to achieve its 2020 climate targets, a reduction of five per cent in Australia’s emissions compared to what they were in the year 2000.

On round figures, $1.2 billion of the total $2.55 billion budget has now been spent.

That means the policy is around eight per cent over budget, which is not too bad, but much of that abatement is not contracted to occur until 10 years from now. And it includes interesting contracts like the 33 “bushfire prevention projects” which will supposedly contribute 7 million tonnes of abatement out of the total 47 million contracted under the second ‘reverse auction’.

That’s right, the government’s banking on bushfires. Sure, if it prevents bushfires it prevents emissions, but that’s hardly the main game if you’re serious about decarbonising the entire economy and moving away from fossil fuels.

And that’s the fundamental issue with the government’s plan to pay polluters out of its ‘Emissions Reduction Fund’. The policy does not send an economy-wide price signal that would incentivise widespread decarbonisation. It singles out companies that may or may not have reduced their emissions anyway and throws billions of dollars at them, but does nothing to apply pressure to those which choose not to participate in the scheme.

In short, there’s nothing to stop net emissions rising. You might buy some abatement here, but they can crop up over there without penalty.

To address this, the government has promised to implement a ‘safeguard’ mechanism, starting from July 2016, supposedly designed to prevent companies not participating in the process from increasing their emissions without penalty. It’s got no teeth.

Analysis from RepuTex Market Analytics in August deemed the policy  “untenable” unless strict baseline limits for emissions are introduced, because the ‘safeguard’ will actually allow emissions to grow. According to the analysis: “None of Australia’s top 20 emitting facilities are currently expected to incur any liability under the scheme despite almost all being forecast to grow their emissions over the next 10 years.” 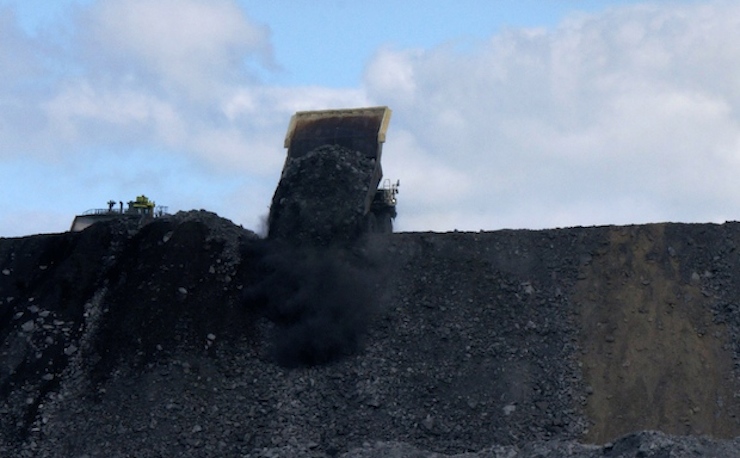 The ‘safeguard’ mechanism is up for review in 2017, and there is scope for the government to set a more effective ceiling on the emissions big business is freely allowed to create.

That would be helpful in meeting the five per cent target for 2020, which is just one third as ambitious as the government’s independent advisory agency the Climate Change Authority has said it should be. But it will be absolutely essential if the government is to meet its (similarly underwhelming) target for 2030, a 26 per cent reduction on 2005 level emissions.

In August, the Australian Industry Group said that the 2030 abatement task would cost between $100 and $250 billion, in nominal terms, between 2021 and 2030. Not that Environment Minister Greg Hunt is acknowledging that. The Minister’s recent comments suggest the government is willing to spend just $200 million a year, or $2 billion in total over the decade, to reach the 2030 target.

Obviously yesterday’s results for the second ‘reverse auction’, coming in at roughly 12 per cent cheaper per tonne of abatement than the first, does not plug that 98 per cent difference between what the government is telling us it will cost and what the Australian Industry Group forecasts.

But the government’s not being very honest about this policy area, as I’ve noted before.

In his statement yesterday announcing the results of the second reverse auction, Greg Hunt claimed that the averaged price per tonne of emissions abatement across the two auctions “is one per cent of the cost per tonne of abatement under the carbon tax”.

That’s just not true, for a range of reasons. Mostly, it’s because the carbon tax did not impose a cost on the budget but rather brought revenue in. Revenue which was then largely distributed to compensate the less well-off for increased electricity prices.

And Hunt’s claim that the government’s Direct Action policy will make great inroads towards meeting Australia’s 2030 target is, to adopt the language employed by the now Prime Minister Malcolm Turnbull in 2009, “bullshit”.

According to analysis from the Climate Institute think tank, based on the price of the first round of reverse auctions and the funding commitments the government has made, the Emissions Reduction Fund can purchase just 14 per cent of the 2,500 million tonnes of emissions Australia needs to cut to meet its 2030 commitment.

If we were actually doing our fair share to meet the globally agreed goal of limiting rises in average global temperatures to two degrees or less, the Climate Institute said, the Emissions Reduction Fund would buy just 7.5 per cent of the 4,700 million tonnes of emissions we’d need to abate.

None of this fazes Greg Hunt. He’s looking forward to a trip to Paris, also taxpayer-funded, to attend major United Nations talks geared at ensuring temperatures rise by no more than two degrees.