An act of civil disobedience led to an amazing image, and left one radio shock jock furious. Max Chalmers reports.

Sitting and breastfeeding her 22-month-old son Manning, Sparrow was one of the 50 odd people who convened at the Department’s Melbourne office to express their disapproval for the treatment of refugees.

The ‘pram jam’ had blocked lifts at the office, and turned a crowded hallway into a makeshift playpen, with children crawling over blankets, and banners stuck to the walls. 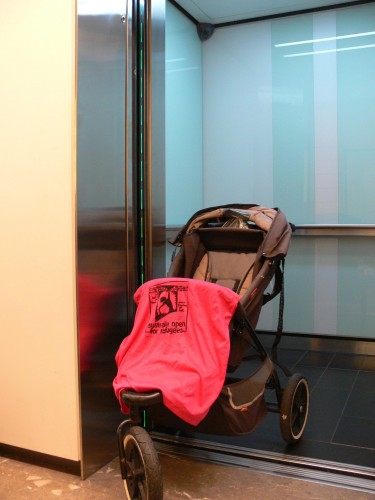 It’s the kind of action Immigration staff must be increasingly coming to expect in their workplace, with a wave of creative civil disobedience desperately trying to shift the bipartisan support for offshore processing and mandatory detention.

MP’s offices are regularly targeted and occupied by Christian activists, and student groups are doing similar.

Having allowed yesterday’s action to go on for about an hour and a half, Victorian police eventually decided it was time to end it. They told those assembled to move on. A few did, but most indicated they would not voluntarily go and were walked – or dragged – out.

As it happened, Sparrow had just started breastfeeding when the removals began and asked the police to come back to her last, which they did. All the while, her young son continued to do what hungry children do. And that’s how this happened.

Photos of the incident eventually made their way to radio station 3AW, where Neil Mitchell – a man who is not opposed to the arbitrary and indefinite detention of infants – was suddenly overcome by a pressing passion for the rights of the child.

“This would have been terrifying for the child. She should be ashamed of herself,” he said, referring to Sparrow.

Children being sent to Nauru good, children at a protest bad.

For all Mitchell’s concern, young Manning hardly seemed too fussed by the proceedings, clinging to his mother’s bosom even as she was removed.

“He was blissfully unaware of anything other than his liquid lunch yesterday but as soon as he’s older I plan to teach him the importance of standing up for the rights of others, even if this means civil disobedience,” said Sparrow. That’s exactly the kind of thinking that has inspired the Melbourne woman and her ‘Friends, Families and Feminist Against Detention’ group.

“I think that many people feel that when a government starts overseeing human rights abuses and ignoring international law, it’s time for citizens to stop cooperating with authorities,” she told New Matilda.

“That’s why we’re seeing more and more groups starting to take action – from the doctors who are refusing to release children back to detention to the Grandmothers for Refugees groups who are increasingly talking about undertaking civil disobedience too.”

Morgan Roche, one of the founding members of another group called Mothers for Refugees, agrees, chastising Mitchell for his unprompted parental advice.

“Yesterday’s sit-it at Immigration was brave but essential,” she said. “Our members are energised by the pictures that came from it and by other creative actions that are happening every other week. There is growing momentum for change and we will not be silenced – Turnbull and Shorten take note.”

Her group has put together a video to bring attention to the plight of women on Nauru, which has managed tens of thousands of views on Facebook.

According to Sparrow, the reason for the ‘pram jam’ style protest was partially pragmatic – some of the mums and dads simply couldn’t offload their kids for the day – and partially designed to send a message.

“We wanted to highlight the issue of children in detention, and the way that the veneration of children and families by politicians never seems to apply when it comes to the treatment of refugees,” she said.

“Why are their families and children not important?”

No arrests were made at the protest. Victorian Police have been contacted for comment.

* Please consider supporting New Matilda by subscribing, from as little as $6 per month. Click here. We survive primarily on reader subscriptions.