Just for a moment, ignore the fact that Malcolm Turnbull may pose a far tougher challenge to the left side of politics and enjoy this.

Various elements of the Australian far right – from Reclaimers, to MPs, to talkback hosts and columnists – are in meltdown, trying to figure out what went wrong, and how their champion was snatched away.

Their sweet prince, a ruler fit to oversee a fairy tale world of knights of dames, cruelly deposed in the dead of night.

Running out of defences for their hero, many instead focused attacks on the Member for Wentworth.

It started yesterday, with former Victorian Premier Jeff Kennett – a moderate compared to some of those referenced above – setting the sulky mood, with a side of recrimination.

“This is an individual who has always put self-interest before anything else,” he said of Turnbull.

In perhaps his most damning blow, Kennett labelled Turnbull “the Kevin Rudd of the Liberal Party”.

Abbott’s dog-whistling on death cults, refugees, and the Middle East may not have saved him from his own party, but it clearly left him some admirers among the anti-multicultural far right groups particularly obsessed with the place of Muslims in Australia. 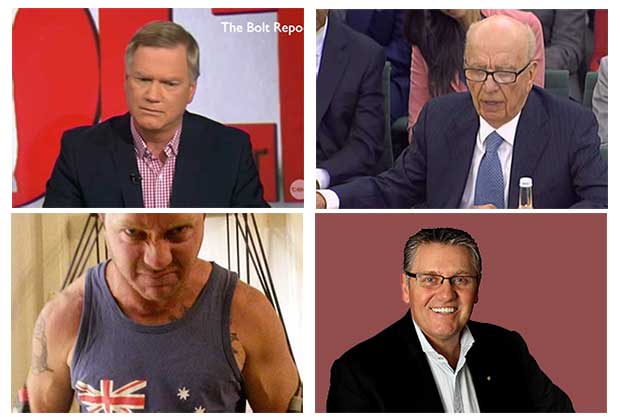 Blogger Great Aussie Patriot, who New Matilda readers will recognise as Shermon Burgess, a man at the forefront of the extremist United Patriots Front group, was distressed.

“Tony Abbott has just been outed and Malcolm Turnbull is in. This is a fucking pathetic joke. You know what it reminds me of? This is exactly what happened when Gillard stabbed Kevin in the back,” he bemoaned in a video from his Facebook page.

Displaying the sort of political antennae that has won him dozens of supporters, Shermon added: “This far left-wing prick is going to turn the country upside down.”

Leader of the anti-halal truther movement and recent star on Four Corners Kirralie Smith may be confused about the difference between the British Labour Party and the Australian Labor Party, but that didn’t stop her from being mad as hell.

Not content with castigation, shock-jock Ray Hadley used his program today to orchestrate a fully-flung inquisition to rat out those who betrayed the glorious leader.

Hadley is trying to establish full list of 53 MPs (54 including Turnbull himself) who voted against Abbott. It's a wholescale name and shame

Speaking of inquisitions, the Christian right are getting biblical, with Senator Cory Bernardi comparing MPs who switched from Team Abbott (see: Team Australia) to Team Turnbull to no less than Judas.

Bernardi: "those who've taken their 30 pieces of silver will be very obvious when the new Ministerial line-up is announced" ouch!

Assuming I’m reading that reference correctly, Bernardi has just compared Tony Abbott to Jesus Christ. We’ll have to wait five days to see if there’s any resurrection… although contrary to rumours on social media, that won’t assist Abbott’s parliamentary pension.

“Truly a dismaying day for the Liberal Party and for the many voters whom are today feeling betrayed,” he said on his Facebook page. “The detriments caused by the disloyalty, betrayal and sequence of events can't be repaired nor rectified.”

If you’ve managed to spare any sympathy for Abbott, then you can surely extend some to Andrew Bolt as well, for whom this is surely an equally bitter defeat. This is a man who had a Prime Minister fight a deeply unpopular, divisive and ultimately unsuccessful battle to water down the country’s racial discrimination laws, more or less as a personal favour to him.

For all his usual sound and fury, Bolt couldn’t do much more than muster a string of rhetorical questions in a limping column that reads like the manifesto of an 11-year-old sent to bed early for refusing to eat his vegetables. The fight is over, and the final lukewarm bowl of spaghetti he has flung from the table has been dispatched, but only out of a sense of obligation.

Despite blaming Turnbull and the media for Abbott’s demise, you get the impression that buried somewhere deep in Bolt’s political imagination is the understanding that his own set of ideas, rather than representing the great hopes of the silent majority, in fact played a role in the downfall of a Prime Minister.

Not so over at taxpayer funded ABC website The Drum, where Chris Berg, a Senior Fellow at free market think-tank the Institute of Public Affairs, thought he’d figured out what went wrong: the PM just wasn’t right-wing enough.

And smiling down from above them all, the benevolent patron saint of right-wing media monopolies, the world’s most powerful media mogul, lamented that it all couldn’t have happened to a nicer guy.

Sad to see such a decent man as Abbott toppled. Now Turnbull needs a November election before Labor sacks Shorten.