During his first press conference as Prime Minister Designate last night, Malcolm Turnbull paid tribute to the broad church that is the Liberal Party.

And then he handed over to Julie Bishop, and things got a little weird.

“As a believer in the Liberal Party that was created by Robert Menzies, I am firmly of the view that the values and beliefs of the Liberal Party are as relevant today as they were when this great party was formed 70 years ago,” said Bishop.

“In Malcolm Turnbull we have a leader who will be true to those Menzian values and beliefs, and I’ll be honoured to serve this party and this country in my current role.”

1. Whatever cabinet reshuffle occurs, Julie Bishop intends to remain as Foreign Minister (note that down Malcolm).

But what does that actually mean? What is a Menzian value?

The first thing you need to know about Sir Robert Menzies – Australia’s longest serving Prime Minister – is that in July 1939, while Attorney General, he confidently predicted: “History will label Hitler as one of the really great men of the century.” 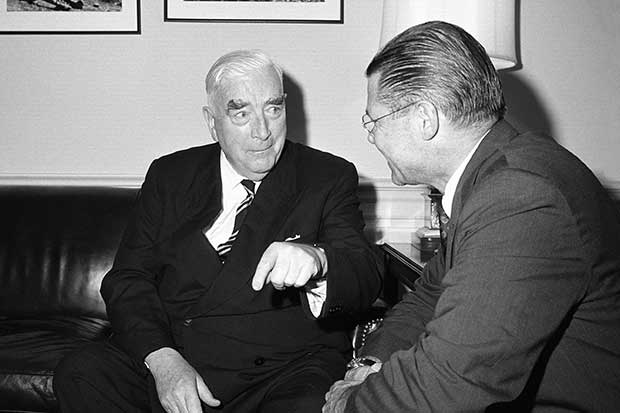 What most impressed Menzies was the Nazis’ outlawing of strikes, abolition of unions and its suppression of the right to collective bargaining.

A few months later, as Prime Minister, Menzies led Australia to war against Germany. Both the comment – and his history (Menzies was widely labeled as a coward for having never enlisted in World War I) – would plague Menzies for much of the rest of his life.

The second thing you need to know about Menzies is that his detractors referred to him as “Pig Iron Bob”, a reference to the fight he led against dock workers who were refusing to load scrap iron destined to he shipped to Japan… the nation that a few years later would repeatedly attack Australia.

In other words, Menzies had moments of incredibly poor judgement, and was very anti-worker. But that’s not all the Menzian era was good for.

Menzies spent much of the early years of the war in Britain, as part of Churchill’s war cabinet. Some historians claim Menzies actually had some support to replace Churchill as British Prime Minister.

By contrast, when he returned to Australia in 1941, he found he had little support among the people who actually elected him, and he was forced to resign.

With the Coalition in disarray, Menzies’ United Australia Party was cast from office in 1943, and by 1945, he realized he needed a new party. The Liberals were formed, and after the 1946 election, Menzies became the leader of the Opposition.

It was at this point that a message he sent to the Department of Defence was leaked, in which he complained that soldiers injured in the war were costing too much money.

“… a dead soldier cost a letter home and a plaque, Legacy provided for his family. A wounded soldier haunted governments for decades” Menzies wrote.

By 1951, Menzies was back in as Prime Minister. That’s when he introduced legislation to a Labor-controlled Senate to ban the Communist Party from Australia. Labor – cowards even back then, and keen to avoid a double dissolution election – let the legislation pass, but the High Court subsequently ruled it unconstitutional.

Menzies got his double dissolution a few months later on his bill opposing the nationalization of private banks (we’ve been paying for it ever since) and after winning office with a reduced majority, Menzies called a referendum and asked the Australian people to give him the power to change the Constitution so he could ban Communists.

It was ultimately rejected.

One interesting parallel is that Menzies ran the first 'TV election campaign', and by all accounts he acquitted himself well, and communicated strongly. This bodes well for our Menzian era, not least of all because, according to Tony Abbott, malcolm Turnbull virtually invented the internet.

Note to Joe Hockey (who obviously won’t be the new treasurer, but a note to him anyway): throughout Menzies’ time in office, he ran the budget in deficit and was a devotee of ‘Keynesian economics’ – the belief that government spending could stimulate the economy when times were bad.

And note to Eric Abetz (who hopefully won’t remain as employment minister): a central part of Keyne’s theory – and therefore a central tenet of a Liberal government – is that unemployment is not a consequence of laziness, rather a function of imbalances in supply and demand. Most people don’t work because they can’t find a job.

On race, Menzies was a mixed bag. He was accused of ignoring the suffering of Jews before and after the war, but in Menzies defence, it also he who began relaxing the White Australia policy, abolishing the dictation test in 1958 and then in 1962 passing legislation to abolish the restrictions on Aboriginal and Torres Strait Islander people voting in elections. That’s either a good thing, a bad thing or a nothing depending on your politics.

All up, Menzies was the very model of a scared white man, who ran a scared a white government for people it hoped to keep scared, albeit less white.

And while, in Turnbull’s defence, he has a much better relationship with the Jewish community than Menzies ever did, we probably are in for an era of Menzian politics.

So expect no quarter for unions, ‘smaller government’ accompanied by a further pairing back on social services, and of course we should see the odd scare campaign if Turnbull and co are lagging in the polls.