Are you one of those people who leapt in to back French magazine Charlie Hebdo earlier this year?

Did you hashtag ‘Je Suis Charlie’?

Blindly? Without really knowing what the publication actually represents?

If you did, you might be feeling a little, well, ripped off right now.

In their latest edition, the ‘great defenders of free speech’ have featured a front page cartoon mocking Aylan Kurdi, the three-year-old Syrian boy whose body washed up on a Turkish beach recently, sparking international outrage at he treatment of refugees. 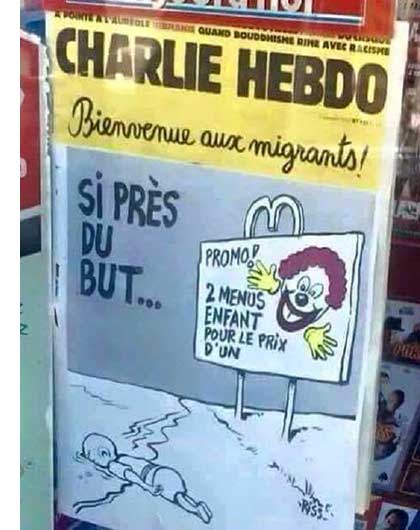 Under a strapline ‘Welcome to migrants’, the main text reads, ‘So Close To His Goal’, and then depicts a McDonalds billboard in the background with the (inexplicable) line, ‘Two Menus Of Children For The Price Of One’.

Apart from the fact it’s not funny, it also makes absolutely no sense. Maybe the ‘humour’ is lost in the translation.

A second cartoon is entitled, “The Proof that Europe is Christian,” and depicts a drowned child next to Jesus, whose standing on the water. The caption reads, “Christians walk on waters… Muslims kids sink.”

Charlie Hebdo was at the centre of western outrage in January this year, when gunmen – upset at the magazine’s constant mocking of the prophet Mohammed – burst into their headquarters in Paris and murdered 12 people, including editor Stéphane Charbonnier. The attack saw an outpouring of support for the magazine in western nations around the world, and the next edition of Charlie Hebdo sold more than 1 million copies.

In stark contrast, a photo of the lifeless body of Aylan Kurdi – a young boy fleeing the civil war in Syria – also sparked an outpouring of international support, leading to extraordinary scenes in Europe of people both welcoming and rejecting Syrian refugees.

In Australia, it sparked a curious dialing down of the rhetoric used against refugees by both the Abbott Government and the Shorten opposition, with Australia announcing it would take 12,000 refugees from Syria before July next year.

At the same time, Australia announced it would widen its bombing campaign in Iraq to include Syria, and the government announced the 12,000 places would focus on the most ‘oppressed minorities’ – a dog whistle to earlier calls to restrict the places to Christian, rather than Muslim, refugees.