The comments come on Abbott’s first day back in the country, after he flew to Port Moresby to attend the Pacific Island Forum, where the leaders of small island nation states called on him to impose a moratorium on new coal mines and take more serious action on climate change.

Ahead of the conference, Abbott had moved to assure media he was taking those requests — which in some cases were accompanied by threats to kick Australia out of the forum if it didn’t lift its game — very seriously.

“I think I’ve got a very good story to tell on climate change to the Pacific Islands Forum and I think Pacific leaders should be reassured by the seriousness with which Australia is approaching this issue,” Abbott said on Thursday.

And then there was this morning’s performance, featuring the Social Services Minister, Scott Morrison, Immigration Minister, Peter Dutton, and, of course, Tony Abbott.

Dutton, the chief protagonist in this tragicomedy, managed to slip in a comment insulting Aboriginal people and Muslim and ethnic leaders, joking that the press conference was running on “Cape York time”.

And then he went full idiot.

“Time doesn’t mean anything when you’re about to be, you know, have water lapping at your door,” joked Dutton.

It was at this point that Morrison – who, like him or not, is clearly the cleverest of the three – pointed out there was a boom mike overhead. Dutton has since insisted it was a “private conversation” they were having, on the podium, at the press conference, with a three-metre boom mic in their face and media assembled around them… and refused to comment.

It seems inevitable that there will be some pretty tense private conversations between Australia’s great leaders and their Pacific Island counterparts over coming days.

It’s also not that great a leap to expect that we will be booted off the Pacific Islands Forum, which was established for the nations of the region to discuss matters of mutual political and economic concern.

The President of the 32 atolls that make up the tiny nation of Kiribati, Anote Tong, had already warned Australia to lift its game or risk being booted in the days leading up to Abbott’s appearance at the Port Moresby talks.

“I think it would be incumbent on [Australia to leave if it doesn’t take stronger action on climate change] because how relevant [would]their presence be?” Tong said. 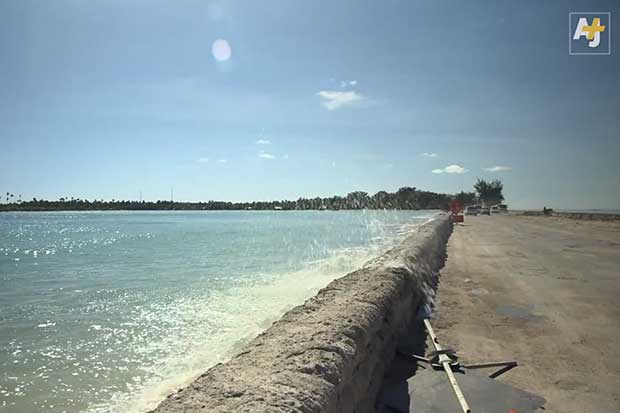 The world bank has said that a sea level rise of 0.4 metres by mid-century — which is a high-end projection, but not far from where Australia’s level of climate ambition would leave the world — would result in massive loss of land on Tarawa, where more than half of Kiribati’s population lives.

Obviously, the modelling that informs those predictions, and the areas chosen for samples, leave plenty of room for conjecture. But the bottom line is that Tong is already planning for the mass migration of his people.

Ni-Kiribati are unlikely to be able to inhabit the island long-term, even with the level of climate change that is already locked in, and Tong has initiated training programs so his people don’t have to flee as refugees.

The impoverished nation consists of 32 islands, which are predominately pancake-flat coral atolls averaging around 2 metres in height above sea levels. Sometimes, the more mountainous islands reach elevations of 3 metres or more.

King tides have already reached 2.8 metres in the past, and will become higher as base sea levels rise.

Houses and villages are already being claimed by the sea, and scientists predict that tropical cyclones will become less frequent but more intense. Encroaching salt water is already fouling lagoons nestled between the shores of the nation’s narrow islands, from which the people drink.

Of course, other small developing island states, like the Marshal Islands and Tuvalu, face similar risks. As New Matilda has previously reported, Kiribati, Marshall Islands and Tuvalu have 95, 98 and 99 per cent, respectively, of their built infrastructure (by value) within 500 metres of the coast.

On Tuesday, before the Australian government had a laugh about his nation’s apparently terminal future, Tong even invited Abbott to visit Kiribati to see the impacts of climate change for himself.

“I’d love to have him come and stay for the rest of his life,” he said.

At this point so, probably, would most Australians.

* Readers interested in the fate of Kiribati should watch this documentary, an excellent resource on the issue.