Canadian writer, activist, and film-maker, Naomi Klein has called out the Abbott government’s response to climate change as perhaps the worst in the world, describing the nation’s carbon reduction targets as “egregious” and our Prime Minister as the “best marketing” possible for her new book, ‘This Changes Everything: Capitalism vs The Climate’.

Klein sat down with New Matilda at the Sydney Opera House this week ahead of her talk at The Festival of Dangerous Ideas yesterday. In the lead-up to the event, Klein described Abbott as 2015’s ‘hottest climate criminal’. She argues that Australia is a perfect example of the confluence of free market fundamentalism’s insatiable appetite for growth, and the realistic costs of tackling the “civilisational threat” posed by climate change.

Klein’s book is predicated on the argument that having failed to take any meaningful action for two full decades, the solutions to climate change must now involve a radical restructuring of global economies to provide the cash needed to cut out carbon, but it is couched in a vision of the climate crisis also acting as a catalyst for the progressive redistribution of wealth.

“The argument I make in the book is that the ideology, the world-view, that Joseph Stiglitz has called ‘market fundamentalism’ simply cannot accommodate what human beings need to do in the face of the climate crisis,” she said.

“This is an ideology that wages war on the regulation of corporations, wages war on the idea of collective action, is constantly trying to liberate corporations from the burden of taxation and that is just not compatible with what we need to do in the face of a civilisational crisis like climate change.”

She said that as neoliberalism grabbed hold of governments around the world through the 80s and onwards, at the same time our awareness of climate change began to grow, a fundamental conflict also emerged “between what our planet needs in order to continue to be a hospitable host to human life, and what our current economic system needs, which is short-term growth and putting profits above all else”.

“And talking about Tony Abbott, Australia seemed [a good place to bring the book’s message]because this is a government that shows perhaps more than any other government on earth what that conflict looks like, and what the costs of that conflict actually are.”

Klein advocates a return to more mixed economies, “because of course, we do need to regulate corporations, we need to plan and manage our economies much more actively than we do now if we are going to get off fossil fuels, which are the basis of modern capitalism”.

“It takes money to do that [and]it has to come from somewhere: We have to tax those with the most in order to pay for this transition and what we see in Australia is the exact opposite.”

Since the Prime Minister declared that “coal is good for humanity” the Abbott government has become an even stronger advocate for an unfettered coal industry. And on the international stage it is widely seen, to quote former UN Secretary General Kofi Annan, as an embarrassing “climate free-rider”.

The Abbott government recently announced at the Paris climate talks later this year Australia will commit to shaving 26 per cent off the nation’s carbon emissions by 2030. It’s around half of what the government’s independent advisory body, The Climate Change Authority, has recommended for the same timeframe.

The Climate Institute has compiled a list of comparable economies — including Klein’s native Canada, New Zealand, the United States and the European Union — and found that while they will reduce their emissions each year at an averaged rate of -2.5 per cent, Australia lingers firmly at the back of the pack with its commitment to reducing emissions by -1.6 per cent a year. Klein, who is also a board member of climate advocacy group 350.org, said that developed nations need to be slashing carbon pollution by 8 to 10 per cent year on year to keep within the two degree rise in average global temperatures the governments of the world have agreed is ‘dangerous’.

While the movements pushing for stronger action on climate change are winning, Klein said, “the problem is this [movement]is also on a firm and unyielding, science-based, deadline” and even the most ambitious targets countries have announced fall short of the pace of change science tells us is needed.

“I just don’t really see how we could be further behind,” Klein said. “I come to this starting from the premise that we have been trying to respond to climate change without rocking the boat for 20 years and the record is abysmal, right?

“The whole record is one of market-based solutions, consumer solutions, green growth solutions, and emissions are up by more than 60 per cent.

“I mean, when I was on a TV show here debating a conservative, you know, he was saying ‘well your solutions are radical’. Right, and the truth is doing nothing is radical,” she said.

For better or worse, Klein argues, global warming will change everything.

Klein said the broader economic agenda of the Abbott government – which has promoted the regressive concentration of wealth into the coffers of the nation’s richest or foreign mining moguls like Gautam Adani, the Indian billionaire attempting to develop the nation’s largest ever coal mine – is driven by the same neoliberal ideology that shackles climate action.

“What the book is arguing is we don’t just need climate action, we need climate justice; we need to take action on climate change in ways that simultaneously fights inequality and improves quality of life for the vast majority of people,” Klein said. 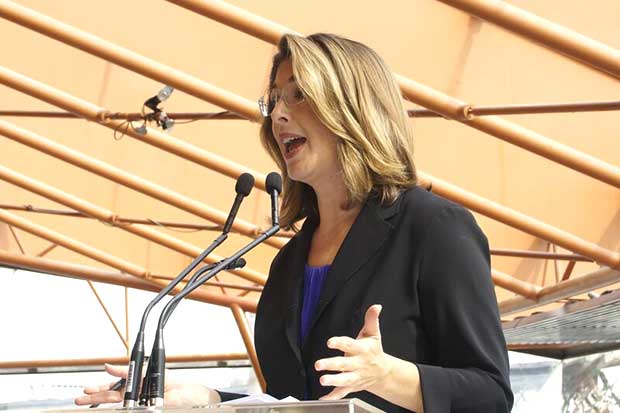 “I feel like in many ways I owe Tony Abbott a debt of thanks because he is this book’s best marketer,” Klein said, but she added that the solutions would not be found by waiting on parliaments to affect change of their own accord.

Instead, the anti-corporatisation campaigner who rose to global prominence after the publication of her first book in 2000, No Logo, promotes divestment, popular protest, non-violent direct action and a return to the collectivism capitalism forsook, including through taking back ownership of energy grids.

“The way I put it is that we will not solve this problem, we will not rise to this challenge, unless there is a massive ideological shift,” she said.

Klein argues that when leaders declare a crisis, as we saw during the Global Financial Crisis in 2008, we see that radical action is possible – the massive stimulus package of the Rudd government seems an apt example – but climate change had not received the ‘shock treatment’ that galvanises leaders to drop everything and act.

In Klein’s view, what is needed is a ‘people’s shock’ to force that action on leaders who are not serving the public interest but rather a zealous commitment to an unfair ideology characterised by the sorts of free trade agreements and ‘small government’ that are the hallmark of Abbott’s administration.

“The people [we’re] talking about are part of an ideological movement that shifted the values of our respective cultures really dramatically, and it was really a deliberate process,” Klein said.

“As Margaret Thatcher said, the economics is the tool but the goal is to change hearts and minds; they set out to move from societies that had a real sense of the importance of the collective sphere to ones that valued individualism above all else.

“…People say ‘well that’s impossible’, but it isn’t impossible. They did it.

“They changed the cultures of our countries so successfully that even when they’re out of power, our opposition parties generally subscribe to versions of the same ideology.”