The controversial Shenhua Watermark mine near Breeza at the Liverpool Plains is being challenged in court today over allegations that state assessment of the project failed to properly consider the impact the coal mine will have on the local Koala population where the project is being developed.

If it goes ahead the mine will fall within the Gunnedah Local Government area, known as the ‘Koala capital of Australia’, and conservationists are alarmed that a population decline for the region of up to 70 per cent since 2009 has not been accounted for.

According to plans lodged by Shenhua, the Chinese state-owned company seeking approvals to develop the project, the area to be cleared includes 847 hectares of Koala habitat which supports a population of 262 animals.

New Matilda understands the legal success of the case is likely to hinge on an allegation that the Planning Assessment Commission, which granted the approval on behalf of government, never specifically considered whether the Koalas that inhabit the area could be driven to extinction if clearing for the mine goes ahead. It’s an added level of drama that Shenhua would no doubt rather avoid, given its project has become a flashpoint in the national political discussion over coal mining thanks to its potential impact on the rich agricultural lands of the Liverpool Plains, often referred to as the state’s ‘food bowl’.

Earlier this year Federal Agriculture Minister Barnaby Joyce broke ranks with his own government to condemn the mine’s federal approval which he said posed an unacceptable risks to agriculture.

According to the Federal Government Koala numbers across the state have declined by around a third since 1990 and there are concerns that Shenhua severely overestimated the population that survives in the Gunnedah Local Government Area.

A ‘Koala Plan of Management’ prepared by Shenhua in 2013 asserts that a heatwave in 2009 caused only a 25 per cent decline in the region’s Koala population, but according to the independent Planning Assessment Commission that number is actually “up to 70 per cent since 2009”.

Despite the criticisms the company’s Project Manager for the Watermark mine, Paul Jackson said that “Shenhua Australia stands by the detailed  assessments of the local koala population contained in the Watermark Project’s Environmental Impact Statement”.

Jackson cited the ‘offsets’ the company has promised to develop — parcels of land that are supposed to be regenerated to substitute for the habitat destroyed by the project — as proof of the company’s commitment to ensuring the project’s impact on Koalas is minimised.

“The company commissioned leading experts to study the local koala population and habitat in developing management and revegetation plans and has committed to preserving 8,000 hectares of preferred koala habitat in both the onsite offset areas and via additional land holdings,” Jackson said.

However, in its submission on the company’s Environmental Impact Statement the New South Wales Office of Environment and Heritage effectively dismissed Shenhua’s plans stating, “The proposed avoidance, mitigation and offset measures will not adequately ameliorate the impacts of the project on Koalas.”

“An inadequate description has been provided of the Koala population that occurs at the project site and the potential impacts on the Koalas as a result of the project,” the agency said in its submission.

David Paull, an ecologist who worked at the agency and provided feedback to inform the submission before he resigned earlier this year, described the population estimates Shenhua relied on as “the biggest con job”.

Shenhua has cited estimates that 12,753 animals remain in the Gunnedah area, but the Australian Koala Foundation said the true figure is likely to be less than 1,300, while Paull suggested there may be between 1,000 and 3,000 animals remaining. 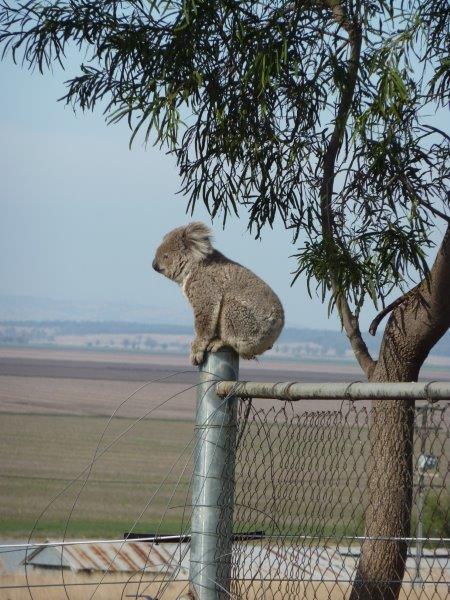 The former Office of Environment and Heritage ecologist said that “the real problem is more the offset methodology [that was in force]at the time,” and that flaws in these guidelines meant that despite the agency’s concerns the project got the green light.

“If they’ve proven offsets and those boxes are ticked, well there’s no red flag for the Koala,” he said. “Taking that into account, though, I thought at the time [Shenhua’s plan] was reasonable and they certainly highlighted the problems and issues with respect to the guidelines.”

Shenhua’s proposals for how Koalas will be encouraged to relocate, and controversially how they may be physically ‘translocated’ if necessary, are likely to also come under scrutiny over coming days as the court considers the mine’s impact on the immediately impacted population.

“Those koalas that remain on site face a future of disease and starvation,” said another ecologist, Wendy Hawes.

“Contrary to Shenhua’s claims, displaced koalas cannot simply move into nearby habitat and the company’s plans to relocate affected koalas is certain to fail”.

These concerns go to the heart of the issue with conservationists unsatisfied by the company’s forward facing commitments.

Local beef and egg farmer and spokesperson for the Upper Mooki Landcare Group, which is responsible for the Court challenge to the mine, Heather Ranclaud said that it was simply wrong to push the region’s significant Koala population to extinction for the sake of a coal mine.

“We are pursuing legal action because there are still so many unanswered questions about the viability of Shenhua's proposed Koala plan,” Ranclaud said.

“It seems at this point the plan does not guarantee the survival of the estimated 262 Koalas currently living where Shenhua wants to put its mine.”