Tony Abbott is a genius. So is Joe Hockey. And it’s time the Australian public gave them the credit they deserve.

“Oh that Joe Hockey, he’s a bloody idiot”. It sounds like a perfectly fair sentence to hear in Australia in 2015. It is not factually correct (no lawsuits please Joe!) but the sentiment is understandable, and that’s why people say it.

It is factually correct to say that the ‘budget emergency” the Abbott government screamed about to soften us up for their nasty first budget has not been resolved. Rather The Coalition that promised in 2012 to ‘reduce Australia’s debt by $30 billion’ delivered in 2014 an increase of debt of more than $60 billion.

The ‘we’ll fix the budget’ song Team Australia was singing so loudly and proudly has fallen away to less than a whisper. The Australian dollar is dropping in value (at the time of writing valued at approximately 72 US cents, a six year low). Most of Hockey’s ‘big savings’ ideas thrown into the budget have been rejected, by both the public and our Senate. These appear to add up to the actions of a fool. But that is an illusion. 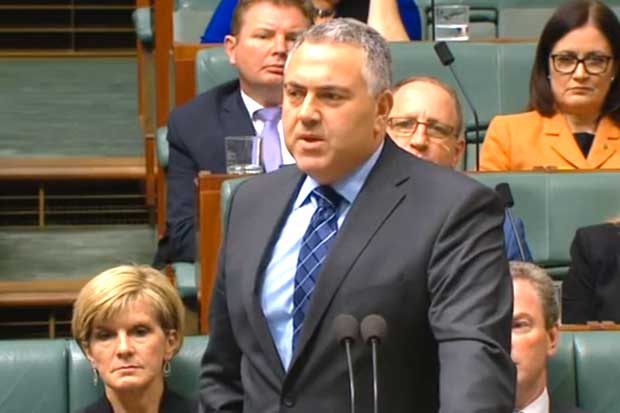 “Oh that Tony Abbott is a damn fool”. You most likely hear that sentence, or a fouler variation of it, on a daily basis. Cursing Abbott has become a daily mantra for those Australians who value science, the arts, social progression, renewable energy, multiculturalism, human rights and our stunning natural ecosystems etc.

Our PM has suffered some of the worst public approval ratings in recent history (at one stage as low at 24 per cent). He doesn’t care. If he did, he’d act differently. Tony Abbott has realized that he doesn’t need to care anymore; for the simple reason that our disapproval doesn’t affect his ability to assert his agenda. Recognizing that is his genius.

The Prime Minster has found a ‘glitch in the matrix’ and he’s milking it for all it’s worth.  He recognizes that our system of democracy is toothless in the sense that there is no opportunity for voters to express their disapproval until an election.

He knows he’ll be criticized for what he does, but he can do almost whatever he wants. He can break 25 promises in his first 150 days in office and charge on.

When his own party tries to get rid of him they fail. When thousands of Australian citizens walk the streets to protest his policies they are dismissed as “a rabble”.

Over 70 per cent of Australians favor gay marriage. Nope nope nope. Abbott’s determination rules. And now that Australians have voted him in (based on a myriad of lies he told in election season), none of us seem to have any option but to sit back and watch him implement The Grand Scheme.

The PM’s agenda is hidden in plain sight; he is pushing corporate interests at the expense of the environment and at the immediate and future cost of the Australian public.

Look around you: The big banks are as powerful as ever. The big energy companies have successfully lobbied to have our renewable energy target capped, then reduced.

The Shenhua Company – the largest supplier of coal in the world – was delighted recently to hear that the Shenhua Coalmine (controversial because its operation will be developed on prime farmland that has been described as “New South Wales’ foodbowl”), was given approval by the Abbott government’s minster for the Environment, Greg Hunt. Our reef will be crushed for money, our old growth forests are still in the firing line, the coal seam gas monster marches on (with an estimated 40,000 gas wells planned for The Kimberly).  And that’s without mentioning the top-secret-but-trust-us-its-fine deviousness of the Trans Pacific Partnership trade deal.

Do your own research – its implications for worker’s rights are a serious concern. Less rights for workers means more power for employers, and corporations tend to be employers. As Abbott gleefully announced to the world after his election win, “Australia is open for business”.

The speed and ferocity with which Abbott implements his plan is his other defining feature as a politician. The pace with which this country’s core values are being deconstructed and re-written (stripping of citizenship without trial, the threat of jailing whistleblowers, Hockey’s budget attacks on society’s most venerable etc) are hard to keep up with.

The PM is bringing his vision of extreme capitalism/conservatism to life; with the working class and Australia’s beautiful environment being used as the fuel for this apparent progress.

Politics is clearly a difficult game, achieving anything significant requires months of planning, negotiation and unwavering conviction.  Politicians who are able to advance their agenda therefore deserve to be respected for their tenacity. Hockey and Abbott are sculpting Australia into a corporate paradise at an astonishing speed- and you’re helping for pay it (for example $10 billion of Australian tax-payers money is being ‘gifted’ to fossil fuel companies in 2014-2015).

Conveniently for them you’re thinking about ISIS instead.

The same patterns repeat; each budget the poor are hit with extra costs for basics like accommodation, education and medicine while the wealthy are protected via tax loopholes, negative gearing and corporate handouts. Just last week it was reported that Chevron, a company that earned $3.2 billion last year, paid no tax in Australia. Nurses pay tax, soldiers pay tax, Chevron doesn’t. They were also given a $5.7 million dollar refund from the ATO. This is the same company hoping to ‘transform Australia into the world’s biggest LNG exporter by 2018’. Zero tax? Doesn’t seem fair you think? Write a letter a to Joe Hockey voicing your protest and see what kind of response you get.

Research from Oxford University found that CEOs tend to be four times more likely to be psychopaths than their employees. In a capitalist environment ruthlessness, a lack of empathy and self-serving ambition tends to increase your chances of success. In our current political climate the ability to be numb to the suffering and discontent of your citizens appears to be an incredible asset. Abbott seems openly disinterested in creating a fair tax system or more accessible education or addressing homelessness; Team Australia is backing its corporate buddies to the bitter end.

The consequences of this choice will be revealed over time, but the worst of it will not be apparent until long after Hockey and the PM are out of office anyway, so they wont personally be affected.  They must realize this too, being genius’ after all.  Their plan for Australia will not benefit the majority of its citizens in the long term; but their skill in executing should leave us all in awe.

So, next time someone tells you these guys are idiots, correct them.

Ruthlessness, in this context, is a form of genius. They know what the game is, they are happy to inflict pain and they are determined to win, by hook or by crook.

Xannon Shirley, better known by his stage name The Tongue, is a musical artist from Sydney, a writer and a political activist.