Parliamentary secretary Alan Tudge seems to be enjoying his taxpayer-funded week in the Torres Strait and Northern Peninsula Area, if his Twitter feed is anything to go by.

He is one part of the team accompanying Prime Minister Tony Abbott during his second almost-week-long sojourn in remote black Australia, a setting so picturesque that it appears to have blinded his salivating media entourage to basic facts, and simple realities.

Not only has Tudge walked the near-deserted streets of Masig Island during ‘peak’ time, ran 5 kms with Abbott around Thursday Island with the TI Deadly Runners Group, hung out with local kids at the Bamaga pier, and enjoyed local dancing under the stars at Injinoo, he is also getting his hands dirty, today telling his followers that he spent the morning with a paintbrush to “refresh Injunoo hall”.

Mr Tudge, along with Social Services minister Scott Morrison and Assistant Minister Luke Hartsuyker, are pictured with paint cans, and grey caps, promoting their government’s own programme – the Community Development Programme. The photo op was promoted uncritically on the personal social media accounts of journalists from the ABC and Channel Nine.

In a week where photo opportunities have been aplenty, and hard questions few, the cushioning provided by a revoltingly soft media pack has only re-iterated why Tony Abbott continually gets away with the myth that he has a true commitment to Indigenous Australia.

Just saying something doesn’t necessarily make it so. 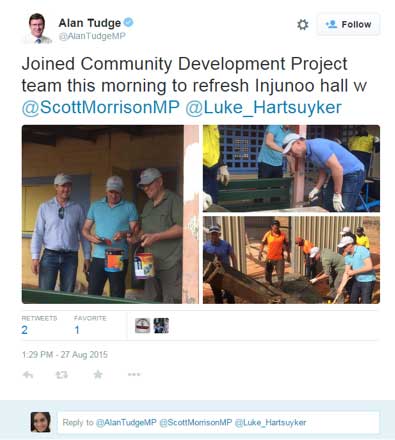 It was a view reinforced by the four white media spokespeople on ABC’s The Drum last night, who all apparently still believe Abbott truly has the best interests of blackfellas at heart, despite everything he has ever done pointing in the opposite direction.

Tudge’s social media promotion of CDP is just one part of this campaign.

In reality CDP is the re-badged incarnation of the Remote Jobs and Communities Programme (RJCP), which replaced CDEP in remote areas after the Howard government began dismantling the successful Aboriginal devised ‘work for the dole’ programme, with Labor finishing it off.

Toughening the requirements of RJCP was the first recommendation adopted by the Abbott government from mining magnate Andrew Forrest’s Creating Parity review.

The $1.5 billion work-for-the-dole programme has been operating in 60 remote communities since July 2013. Earlier this year, Indigenous affairs minister Nigel Scullion announced he would be making the provisions of the programme even stricter – rather than working 16 hours a week for Newstart wages, RJCP participants would instead by required to work 25 hours for five days a week, over 52 weeks in order to receive those payments, or risk having them cut off.

It lead to immediate criticism across the country that the Abbott government was condemning Aboriginal workers to the days before equal wages, with remote area participants receiving under award wages of less than $10 an hour.

In fact, the peak body for Australian workers – the ACTU – have been one of the most vocal opponents of the programme.

Instead of looking at alternatives – more community-controlled solutions to Aboriginal employment, even re-visiting CDEP and nutting out some of the problems – Scullion has instead simply renamed the programme, changing it to the CDP.

He has also effectively placed a media gag on providers, unless they first check with PM&C.

“I think they are identical. What we saw basically was an attempt by Scullion to distance himself from RJCP, which was a previous government – Julia Gillard/Jenny Macklin government initiative, and what he’s done is link up the so-called Community Development Program, which sounds like the old CDEP.

“So he’s trying to cash in on the popularity of the old CDEP but at the same time he’s brought in a very draconian remote work-for-the-dole scheme, where you have to work 25 hours a week for the dole.

“In some ways this is very clever re-badging. You call it something that sounds popular – but you make it a far more draconian programme, and part of the reason he’s done that is the realisation that the so-called real jobs he’s hoping to deliver in remote Australia don’t actually exist.”

Mr Tudge is also a key seller of CDP, and his social media posts are testament to that.  But rather than spend a couple of hours ‘refreshing’ a community hall in Injinoo, why doesn’t he live for at least six months in the same community, inherit the disadvantage and the hardships that come with it, and work 25 hours a week, five days a week for Newstart payments?

Wouldn’t that be a more appropriate learning experience? Then let’s see if he can walk into a ‘real job’.

You might fool a media pack, but you don’t fool us. The Abbott government’s ‘learning experience’ is so far removed from the reality of Indigenous Australian life that it’s laughable.

However, for a country that has so little contact with our mob, it is easy to see how so many are sucked in.
As Torres Strait Islander journalist Karen Dorante noted on Let’s Talk this morning, “wasn’t the purpose of these visits to get a real sense of what it’s like to be an Aboriginal or Torres Strait Islander, yet he’s camping in a defense facility.

“I would have preferred for him to have gone over to Hammond, to the community where I’m from, and live in a house, take his ministers with him in a three bedroom house with just one toilet, one bathroom, and share it with eight other people.”

The cynicism amongst First Nations communities, who deal firsthand with the consequences of his government’s savage attacks on community-controlled organisations, and the Howard-era push for mainstreaming, only continues to grow.

This isn’t a ‘learning experience’. It is a photo op against a scenic backdrop, with blackfellas expected to slot into the agenda somehow. And the fawning media pack have been the best propagandists a government could hope for.

As Prof Altman later noted, “the media are letting Abbott get away with murder on this sort of populous jaunt. It was meant to be a week in a community, once a year. Now it’s a grand tour of exotic places at the taxpayer’s expense.”

If they truly wanted a story, instead of following around Abbott like lapdogs, they could turn around and actually ask an Aboriginal or Torres Strait Islander person, given they are actually in a community for once.

Rather than ask the out-of-touch Abbott about the future of constitutional reform, why don’t they ask a local whether it is relevant to their daily lives? I bet you, while some people might find it important, it is not the most urgent concern.

I have yet to see a story about the high costs of living in the Torres Strait, of the crippling costs of fuel, of the employment crisis, of the overcrowding. But all of that is secondary to the media narrative, set by the Abbott government to a compliant media.

When Abbott visited the Bamaga school yesterday, I saw only his quotes headlining the news, along with a departure from the script – the views of the NPA Mayor Bernard Charlie.

But afterwards, there was hardly any relevant questioning about the actual outcomes of the government’s school attendance push, or its national focus on Direct Instruction, the Noel Pearson-backed teaching method which has come under strict critique from Aboriginal educators. Bamaga school currently doesn’t employ DI.

There was little focus on whether the school’s exemplar attendance figures were a result of other programmes.

In fact, the leadership at the school have been involved in Aboriginal educator Chris Sarra’s Stronger Smarter approach, which involves lifting the self-esteem of students and instilling pride in their cultural identity. They are waging a war against the burden of low expectations that is crippling to the future of First Nations children.

I saw nothing about that injection of quality leadership in the school promoted in the media.  Instead Abbott’s quotes were again prioritised, drowning out the voices of Aboriginal and Torres Strait Islanders who know the solutions within their own communities, but are never given the toolkits to begin working on them.

Instead they get fly-in fly-out politicians who think they look good with a paint can.

And when media accompanied Abbott to the grave of Eddie Mabo, did they ever think to ask about the Liberal National’s own history in undermining native title? About the Howard government’s attacks on the Wik people with his disgusting Ten Point Plan to dismantle Native Title?

Or did they bother to google the difference between Native Title and Land Rights, and look at how land rights laws have been under continual attack from conservative governments, even now in current times, when we are awaiting a COAG review of Indigenous land administration?

Where is the analysis of overwhelming focus on development when it comes to Native Title, encased in Abbott’s white paper for the north? And did they even bother to make the distinction that Native Title is not Land Rights?

You’d think if they were visiting the grave of such an important historical figure, they could take the time to do a little bit of research.

But you shouldn’t expect it, because it’s easier to report on pictures, and find the tastiest soundbites. Meanwhile, when the media planes leave and Abbott is happily tucked back in at the Lodge, the situation in Aboriginal and Torres Strait Islander Australia will remain largely unchanged.