It’s hard to estimate how common adultery is. People are naturally reluctant to report acts that they try to keep as secret as possible. A story in the New York Times from 2008 reported that University of Washington academics found that “the lifetime rate of infidelity for men over 60 increased to 28 percent in 2006, up from 20 percent in 1991. For women over 60, the increase is more striking: to 15 percent, up from 5 percent in 1991.”

The rate of infidelity was higher among young people: approximately “20 percent of men and 15 percent of women under 35 say they have ever been unfaithful, up from about 15 and 12 percent respectively.”

In 2013, Kate Figes in the Daily Mail observed that “surveys in the UK and the US suggest that between 25 and 70 per cent of women — and 40 and 80 per cent of men — have engaged in at least one extramarital sexual encounter.”

Yet whatever the precise numbers are – 20 percent or 70 percent – the fact is that those who struggle with monogamy aren’t all monsters. It is often very hurtful and even devastating. Yet its pervasiveness indicates the difficulty of acting horrified at those cruel enough to engage in such acts. The fact is, if you haven’t personally cheated on anyone, you probably know plenty of people who have. They aren’t awful humans. They’re just human. They have weaknesses, and struggle to reconcile conflicting feelings and desires, like most of us on this planet. Unless someone cheats on you personally, you are probably in no position to judge them for it.

Similarly, adultery comes with all types of complexities. People negotiate monogamy in all sorts of ways, some more conventional than others. Putting aside grey areas where strict monogamy isn’t explicitly agreed upon, consider the issue of unfaithfulness in a context where exclusive monogamy is expected. Even with that stipulation, infidelity can come with all sorts of mitigating circumstances. People’s personal lives are messy and difficult, and most people recognise that this is not the kind of place the law should intervene.

With this in mind, we can consider the information provided by hackers from Ashley Madison. Ashley Madison is a website designed so that married people can pursue extra-marital affairs. As with other dating and relationship sites, not everyone on this site successfully finds what they’re looking for. A person who is dating or married to a member of the site would undoubtedly be concerned, if not alarmed by such a discovery. Apparently, there are now 33 million accounts around the world that can be found from the leaks. 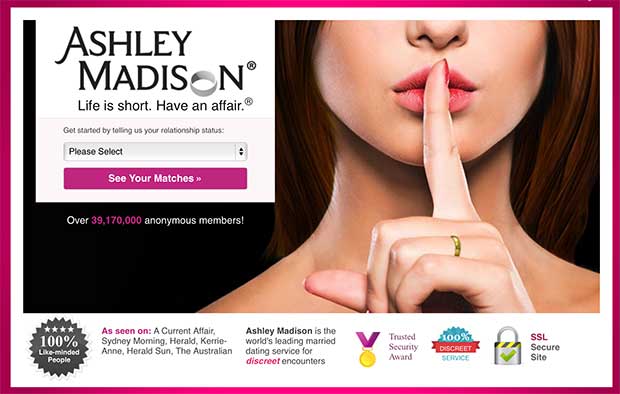 This story naturally attracted a great deal of media interest. Sex, hacking, adultery – it’s the kind of thing that draws readers from a broad spectrum: those worried about the faithfulness of their partner, and those who want to disapprove of the personal lives of others as morally inferior.

Media coverage has thus been somewhat tawdry and prurient. Most notorious are the two schmucks on radio who publicly exposed a woman’s husband as unfaithful on live radio. Much of the media has operated at a similar level.

Media outlets have given saturation coverage to the leaks, and then published po-faced articles decrying the exposure of people’s private lives and details. Here, News Limited joins in the exposure of a celebrity caught on Ashley Madison by the data hack. And here, Matthew Dunn quotes his favoured expert warning against judging people whose details are leaked, and that this is online bullying that could lead to suicide. 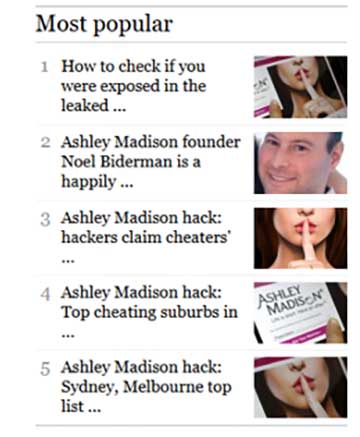 Likewise, Fairfax seemed to delight in the saucy revelations of cheating. It has featured a slew of stories on the leaks.

In some of its stories, it notes the kinds of sexual requests and interests revealed by the hacks, as well as the most unfaithful suburbs in Sydney and Melbourne. Another story was titled ‘How to check if you were exposed in the leaked Ashley Madison data’.

Here you can read Hannah Francis, Ben Grubb and Tim Biggs reporting on the issue. They also apparently assigned Liam Mannix and Adam Henschke to chase the story. Was it a slow news week? Are any other issues in Australia important enough for Fairfax to assign five reporters to them?

Yet even as Fairfax ran story after story based entirely on the hacks and the expected fallout, it also ran articles shedding crocodile tears about how unethical the leaks were. Francis, Grubb and Biggs warned that “the act of "outing" [users]through such a brutal (and illegal) breach of privacy raises serious ethical questions.” They also cite the risk of suicide, even as they join the throng of Fairfax colleagues doing all they can to hype the story. Fairfax reporter Josephine Tovey joined in, citing a “news and gossip blog” which had trawled the hacked information to publicly out a celebrity.

After helping the news and gossip blog out the celebrity, Tovey continued to her conclusion: “Stealing and publishing private information on the other hand, where there is no clear public interest, is really wrong. There is no wider public interest in knowing whether your neighbour, or someone at work, or a total stranger, is having an affair, or what he or she likes to do in bed. It might titillate us to know, but it's none of our business.” She proceeded to cite an excellent blog by Glenn Greenwald on the topic, before writing, “The hack is part of a wider culture of sexual shaming on the internet, such as the publication of revenge porn, that cruelly disregards individuals' right to privacy under the guise of moral superiority or outright vindictiveness.”

Tovey concluded by explaining how none of us “should feel good about” the celebrity she casually named again in the Sydney Morning Herald, which two weeks ago identified itself as the “No.1 in total news masthead readership with a cross-platform audience of 5.1 million.”

The fact is, given the spying conducted on the entire world by a small coalition of countries which includes Australia, everyone’s private life is vulnerable to public exposure. When Martin Luther King Jr was struggling for civil rights in the USA, the FBI responded by blackmailing him with reference to his infidelities. If similar blackmail occurred today, does anyone wonder how the media might respond if it got access to that sort of leak?

No-one lives an entirely uncomplicated and blameless life. Today, most people rely on mobile phones and internet for long-distance communication. Both can be hacked, and these days often are.

Such hacking can expose our darkest secrets, our most private thoughts, and our greatest vulnerabilities. The shameless glee with which media chases these kinds of stories is troubling, because it seems to point to a dark future. One where government organisations can quietly disseminate scandals about troublesome public figures, with the media gleefully joining in, whilst striking appropriate moral poses, and maybe even shedding more crocodile tears about whether or not other people should be exposing people’s private affairs.