Conservation groups have slammed the Abbott government’s announcement today that it will seek to restrict who can challenge the administration of federal environmental law as a case of sour grapes, and an attack on the community’s right to a healthy environment.

The move comes in the wake of a government bungle which paved the way for the Mackay Conservation Group to successfully challenge Greg Hunt’s approval of Indian company Adani’s massive Carmichael coal mine.

The mine, which would be the largest in Australia’s history if built, had its Commonwealth approval rescinded by the Federal Court last week because Hunt did not properly apply the law after he failed to consider conservation advices relating to two threatened species, the Yakka Skink and Ornamental Snake.

The decision has enraged the federal government, with Prime Minister Tony Abbott last week claiming green groups were using the law to “sabotage” the coal industry. Today, Attorney-General George Brandis said the government would move to protect jobs which the Australian Minerals Council has claimed are under threat.

“The Government has decided to protect Australian jobs by removing from the Environment Protection and Biodiversity Conservation Act 1999 (EPBC Act) the provision that allows radical green activists to engage in vigilante litigation to stop important economic projects,” Brandis said. 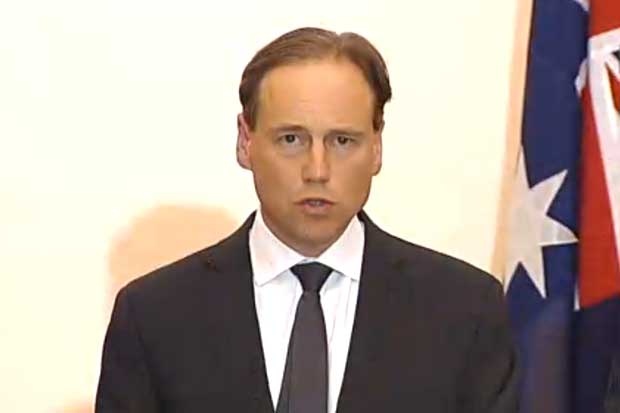 The law was originally introduced by the Howard Government, and section 487 of the Act allows any person or group that’s been involved in the “protection or conservation of, or research into, the environment” in the last two years to bring a court action.

Brandis claimed this rolls out “a red carpet for radical activists who have a political, but not a legal, interest, in a development to use aggressive litigation tactics to disrupt and sabotage important projects”.

“The activists themselves have declared that that is their objective – to use the courts not for the proper purpose of resolving a dispute between citizens, but for a collateral political purpose of bringing developments to a standstill, and sacrificing the jobs of tens of thousands of Australians in the process,” he said.

Glen Klatovsky, the Director of Places You Love, an alliance of 42 leading environmental groups, said that “the hysteria being whipped up by the current government is completely out of whack with the reality”.

“Less than 0.5 per cent of all approvals that are referred as controlled actions of the EPBC Act have been challenged,” he said.

“With Senator Brandis describing this as ‘lawfare’ and ‘vigilante litigation’, we are concerned that this massive over-reach is a desperate attempt to divert public attention away from questions of government competence.”

Brandis has sought to frame the move as a chance “for the federal Labor Party to show that it cares more about jobs than inner-city greens” as the government flails over its poorly received position on marriage-equality, climate change policy and the unravelling of the Royal Commission into Trade Unions.

The Chief Executive Officer of the Australian Conservation Foundation, Kelly O’Shanassy, said that communities are not being unreasonable but simply “want to make sure approvals for projects, such as Adani’s proposed Carmichael coal mine, are above board and consistent with people’s right to a safe environment”.

“This move to strip communities’ rights to challenge an approval under our national environmental law favours big polluters over communities and is an attack on people’s rights to clean air, clean water, fertile soil and thriving nature,” O’Shanassy said. The Greens have already struck out at the reform, which Brandis said will come before the House of Representatives later this week. Deputy Leader and Environment Spokesperson Larissa Waters dismissed it as “a dummy spit from a government that got the law wrong twice, and now wants to stop the community from holding government to account”.

“This latest attack follows threats to the tax deductible status of donations to environment groups, complete de-funding of Environmental Defenders’ Offices and the gutting of our renewable energy target,” Waters said.

In Question Time today the Prime Minister reportedly claimed that the Carmichael mine, which currently has neither state nor federal approval, would be “good for jobs, good for global development and good for the environment because Australian coal is better than the alternatives”.

He also repeated dubious claims the project and associated rail and port infrastructure would create 10,000 jobs, despite Adani’s own expert witness contradicting those figures in the Queensland Land Court earlier this year, instead calculating the mine and rail projects would create less than 1,500 jobs.

The Prime Minister’s other claim, that the project would help alleviate energy poverty in India, was also recently rebuked by the World Bank’s Climate Envoy, Rachel Kyte, who noted the “huge social cost to coal and fossil fuels… if you want to be able to breathe clean air.”