Politics and religion are both in a state of flux. A bell tolls jarringly with a call for accountability from a disgruntled public.

Hard on the heels of Treasurer Joe Hockey's ‘End of the Age of Entitlement’ speech, both sides of politics face closer scrutiny, controversially intensified by Speaker Bronwyn Bishop's chopper trip to Geelong, and subsequent resignation.

Religion, too, is in turmoil with seemingly endless revelations of impropriety emerging from the Royal Commission into Child Sexual abuse. All is not well with a pious priesthood and public disquiet is evident.

While politics and religion may appear unrelated – certainly on these separate issues – it is the question of 'accountability' that binds them tightly together.

Historically, in fact, religion and politics have enjoyed a long and symbiotic relationship. In 380 CE, Emperor Theodosius effectively made Christianity the state religion of the Roman Empire. But that's another story.

From a contemporary perspective, the current catalyst that blemishes any notion of a 'secular Australia' – the simple act of separating Church and State – is the protracted parliamentary fracas over marriage equality.

Both Labor and Liberal have floundered over this burning social topic that has so recently been resolved by Ireland and America – two of the most religious countries on Earth.

Tony Abbott dashed public hopes for a conscience vote on the issue with his controversial call for a Coalition party room meeting, resulting in a two-thirds majority to defeat an open vote on the floor of parliament." So what is it that prevents our two main parliamentary parties from joining the more progressive countries of the world? What aspect of politics has marriage equality suddenly brought to light?

The answer, glaringly, is religion!

Religious MPs from both sides combine to repeatedly defeat marriage equality – together with a sweep of other progressive contemporary policies. Issues that, for many years, have had overwhelming public support.

The majority of Australians are now non-Christian, but what religious beliefs do our MPs hold? We simply don't know! Very few declare their faith in their parliamentary and electorate biographies. Why so much secrecy?

In this 'evidence-based' era, the voting public has a right to know where their elected representatives stand – not merely their Church allegiances but the full extent of their religious beliefs.

In no way does this compromise their constitutional right to faith.

But how many MPs are among the 32 per cent of Australians who continue to assert that "Genesis is the inerrant Word of God"? Do they also accept the story of Noah's Ark as historical fact, and that the Earth is only 6,000 years old? The public, and media, need to know the depth of religious superstition in our federal and state governments.

Why are parliamentarians not questioned closely on personal faith – particularly at election time? And why should such beliefs deny the wishes of the vast public majority on the entire socio-political agenda?

Religion can dramatically dictate an MPs attitude to a whole raft of contemporary social policy. Voters have every right to know the bold facts of their candidate's religion.

With the public becoming increasingly non-religious the electorate needs factual information to decide who to choose as their local representative, and that includes specific knowledge of an MP's supernatural convictions.

It's not just the fiasco of indecision by Labor and Liberal on marriage equality; it extends to voluntary euthanasia, equality for women and a score of other key topics. More than two dozen such issues are canvassed in the new book, Sacred to Secular, which also examines how the Scandinavian nations have taken religion out of politics.

The full extent of covert religious influence in Australian politics is a mystery, although the present government is seen as highly Christianised. It surfaces only in those rare moments when parliamentarians are caught off guard, or they become overly brazen.

In March last year The Age reported Tony Abbott's evangelical rant to a group of Tasmanian timber workers that left no doubt about the strength of his Christian zeal. 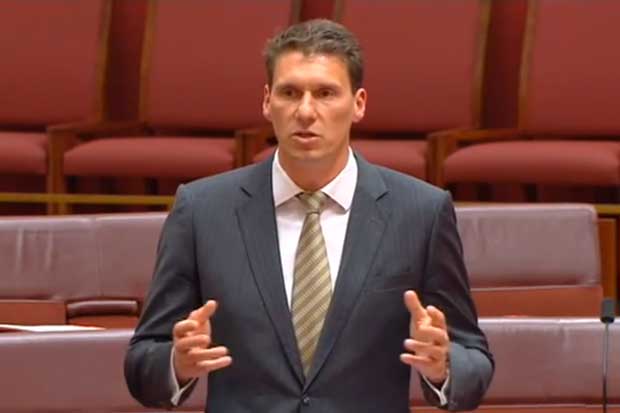 Senator Eric Abetz also thinks God has a major role to play in politics. He was reported in The Australian as saying only the "intellectually bankrupt" would expect MPs to "leave their religion at the doors of parliament".

South Australian Senator Cory Bernardi is another outspoken Christian who attracts much attention, most notably when he linked marriage equality with bestiality.

Surely, it’s time that every parliamentarian was subjected to greater religious scrutiny so that the public knows exactly which MPs quietly and surreptitiously decide party policy based on supernatural Christian beliefs.

All members of parliament are currently required to declare their pecuniary interests, for obvious reasons of probity. Is it too much to ask that they also declare, openly and honestly, the extent of their religious beliefs? And, to be wholly accountable, to then place them on the public record?

The Constitution is unmistakably secular, save for one antiquated reference to God in the Preamble. At the time of Federation all education was "free, compulsory and secular", but since 1963, when Robert Menzies began funding Catholic schools, Australia now has the most Christianised school system in the Western world.

And while the Constitution guarantees freedom of religion, its 'secular' intent is to keep religion out of politics and education. We need to learn from the robust secular countries of Scandinavia and calmly reposition religion from its "public and political" status, and to see faith as purely a matter of "personal and private" contemplation.

To achieve that, Australia must take the bold step and finally remove an archaic Christian taboo – the one that prohibits any public challenge to religious authority, and demands a pious right to secrecy. It's that very taboo of silence that lead to the Child Abuse Royal Commission, and thousands of victims finally being heard.

Both the public and media need to expect and demand parliamentary accountability in politics – as it impacts on the social and educational agenda. We must end the era where parliamentary religion can silently and covertly impact so heavily on the contemporary socio-political agenda.

Brian Morris is Director of Plain Reason and the author of a new book 'Sacred to Secular'.