On August 7, the Sydney Morning Herald ran a vacuous story on its front page. The breaking news is that we’re being spied on.

Informed readers will not find this news, given all the leaks by Edward Snowden. Yet Fairfax took a novel approach. Having mostly ignored Snowden’s brave revelations, with the anomalous exception of some terrific reporting by Philip Dorling, Fairfax decided to go in another direction.

Featured online, the thrust of the story is that Australians are being spied on by Russia, China, and Iran.

Given that we actually already know who is spying on us, this story required some audacity – and a rather bold editor, to put on the front page.

What was the source for this important story? A Republican Congressman from the United States of America. Though the online story doesn’t think to tell us that Devin Nunes is a Republican, he is simply presented as an apolitical American authority on intelligence: “congressman who heads the intelligence committee in the US House of Representatives”.

As Peter Hartcher and John Garnaut breathlessly reported in their exclusive, Nunes has warned Australians that “all mobile phone and email communications are constantly vulnerable to being hacked by ‘foreign adversaries’.” Nunes says that, “None of our networks are safe”, and “The rules of the game have changed”. This is because of “the hyper-activity of Russian, Chinese and Iranian state actors”, paraphrase Garnaut and Hartcher.

Hartcher and Garnaut reported that Nunes alleged Russia and China were “clearly the world’s worst offenders, not necessarily in that order, followed by Iran. And their targets were not confined to the United States.” They go on to note that American officials admitted a month ago that various personal details were stolen from security background checks on 21.5 million Americans.

Given these claims – and what Hartcher and Garnaut thought they’d spare their readers – I want to turn to Glenn Greenwald’s excellent book on the Snowden files and fallout, No Place to Hide. 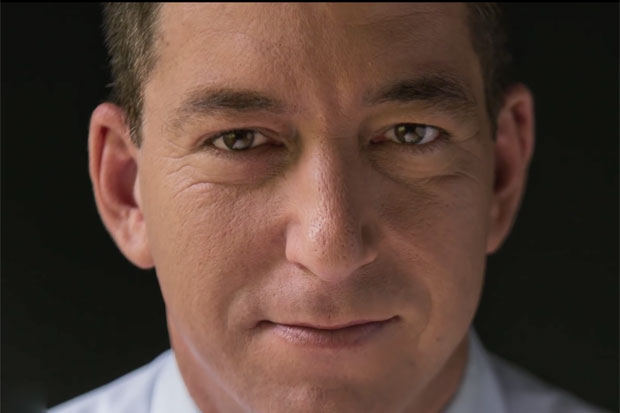 Greenwald was one of only a few journalists who spoke to Edward Snowden, and to whom Snowden leaked his highly classified documents. The story of how this came about is recounted in riveting fashion in the first two chapters of the book.

Chapter 3, entitled “Collect It All”, discusses what exactly the National Security Agency (NSA) and other organisations are doing. Chapter 4, “The Harm of Surveillance”, makes the case as to why this spying should be generally opposed. Chapter 5 then features some characteristic remarks by Greenwald on the role of the media, in relation to these issues and more generally.

As for what is being done, Greenwald explains:

Taken in its entirety, the Snowden archive led to an ultimately simple conclusion: the US government had built a system that has as its goal the complete elimination of electronic privacy worldwide. Far from hyperbole, that is the literal, explicitly stated aim of the surveillance state: to collect, store, monitor and analyse all electronic communication by all people around the globe. The agency is devoted to one overarching mission: to prevent the slightest piece of electronic communication from evading its systemic grasp.

The National Security Agency has “three different categories of foreign relationships”. The first is the “Five Eyes Group” – it includes Australia, the US, New Zealand, Canada and the UK.

We all spy together on the rest of the world, and usually don’t spy on each other unless requested to spy on particular individuals.

Then there’s the second tier of countries, who we sometimes cooperate with, but spy on anyway, and the third tier who we spy on and don’t cooperate with.

So far as I know, Greenwald has not yet made any extended discussion of the particular role of Australia and what the documents show about our role in the international spying. But the book reports that in 2011, the Australian government “explicitly pleaded” with the NSA to extend their partnership with us, and spy on more Australians.

On February 21 2011, the acting deputy director of the Intelligence Defence Signals Directorate complained about the threat of “home grown” extremists, and thought more American spying was the tonic we needed.

While we have invested significant analytic and collection effort of our own to find and exploit these communications, the difficulties we face in obtaining regular and reliable access to such communications impacts on our ability to prevent and detect terrorist attacks and diminishes our capacity to protect the life and safety of Australian citizens and those of our close friends and allies.

It is not clear if we should worry about the “significant” efforts undertaken to secretly spy on Australians, or if we should ponder whether or not such help was provided. The book catalogues at length all the things that are being spied on – one leaked slide shows organisations like “Microsoft (Hotmail, etc)” “Google”, “Yahoo”, “Facebook”, “Youtube”, “Skype” – as providers.

It then lists “What Will You Receive In Collection”? Email, chat, videos, photos, stored data, file transfers, video conferencing. This was just in one slide.

Greenwald’s comment above – that the goal is “complete elimination of electronic privacy worldwide” isn’t even an exaggeration. One slide at a presentation given at a conference of the Five Eyes had as a heading: “New Collection Posture”. In a one month period, one unit of the NSA – just one – “collected data on more than 97 billion emails and 124 billion phone calls from around the world” in the space of 30 days.

The amount of spying boggles the mind – and indeed, it overwhelms those doing the spying. The NSA – and its partner organisations, and allies in the Five Eyes – collect so much data that, for example, the British intelligence organisation GCHQ can “barely store what it has”.

One leaked document from the NSA even acknowledged in 2012 that it “collects far more content than is routinely useful to analysts”.

These are the facts, and this is what Australia takes part in. But Fairfax – “Independent, Always” – decided instead to publish front page horror at what those dastardly Iranians, Russians and Chinese are up to, now that they’ve treacherously changed the rules of the game.

To be fair though, Garnaut and Hartcher did, in the course of their exclusive, consider whether or not Nunes’s allegations could be compared to what was revealed by Snowden. They didn’t reveal what Snowden had showed – too embarrassing, and too subversive to feature in Fairfax – but they put that comparison to Nunes.

Nunes then claimed that Snowden had “endangered the lives of American operatives and Australian operatives”.

What is the evidence for this? Well. The important thing is that Hartcher and Garnaut – journalists they are – wrote down what the Republican told them.

Nunes then elaborated further: “It should have raised questions for everyone when Snowden fled first to the Chicoms and second to the Russians… These are the guys who are conducting cyber attacks all over the world and utilising cyber attacks for economic espionage.”

Which is more or less standard rhetoric for Republicans, but I suppose thrilled Fairfax, what with the excitement of an important American speaking to them personally.

Precisely what we’re meant to take from Snowden going to “Chicoms” and then the Russians eludes me. If Nunes thinks it’s the 1950s, and he can persuade us there’s a nefarious world communist conspiracy of which Hong Kong and the USSR are still part, then maybe Snowden going to both is suspicious. The fact that they’re different countries, with different interests, and that Snowden hadn’t actually intended to stay in Russia, makes this kind of unsubtle insinuation more than a little hard to swallow.

The story ended thusly: “Australian officials privately blame Chinese hackers for tapping into emails, phones and computers of major Australian corporations, human rights groups and senior politicians right up to the level of prime minister.” So that they’d corroborate their front page story with something vaguely supportive: the undocumented claims of Australian officials, given anonymity to promote claims they apparently can’t prove.

The story is entirely a product of mindlessly writing down and publishing the claims of someone in power, without the faintest interest in challenging or investigating those claims in any way – let alone comparing them to the public record of what we know about people’s internet and mobile phones being spied on.

This kind of stenography journalism, in service of smears against Edward Snowden, seems almost designed to infuriate Glenn Greenwald, who has written endless critiques of both, apparently to little avail.

Readers who wish to learn more about the surveillance of the world, or the shameful role of the media, would do well to read his book.

As for the horror of cyber-attacks – again, if Fairfax practiced journalism, it might notice certain glass houses. For example, in New York Times of June 2012, David Sanger reported that, “From his first months in office, President Obama secretly ordered increasingly sophisticated attacks on the computer systems that run Iran’s main nuclear enrichment facilities, significantly expanding America’s first sustained use of cyberweapons, according to participants in the program.”

These attacks began under the second Bush Administration, and because of a “programming error” wound up “around the world on the internet”. Oops.

The shame of the story is that regardless of what Iran, China or Russia are doing, we know what Australia (and our partners in the Five Eyes Alliance) are doing, and the fact is, Australia can act as citizens to change and perhaps stop it.

Yet the media has been missing in action.

There has been vanishingly little public discussion of the issue, which has been allowed to slip off the radar. What might have been a public controversy is hardly even public.