It’s the petition that took change.org by storm.

But then he went to Bali for a holiday.

“The discovery of an adventure park on the beach containing a small pool 10m x 20m about 400 metres south of Komune Resort and the famous Keramas surf break housing four dolphins in chlorinated water for tourists to swim and play with was a huge shock.

“This is a request… to free the dolphins and allow them to be re-introduced into the wild, where they belong.”

Two months after it was launched, the petition has attracted more than 400,000 signatures, and it’s still growing. That’s due in no small part to a little help from some star power.

As News.com.au reported recently: “The campaign to save up to eight dolphins confined to tiny hotel pools in Bali has gone viral with more than a quarter of a million people signing an online petition.

“Among those seeking to have the dolphins released and rehabilitated are surfing legend Kelly Slater, actors Adrian Grenier and Erica Durance, singers Leona Lewis and Guy Sebastian, and model Sheridyn Fisher.”

Naturally, the news.com.au story includes a photo of a bikini-clad Fisher on a far away beach. Because sex. Even the Daily Mail is covering it, filing a story recently about a young Australian ‘model’ who has joined the fight to free the Bali dolphins.

New Matilda readers might remember the Daily Mail from such stunning scoops as ‘Tropical Cyclone Pam (which devastated an entire country, mind you) Knocks Over Tree In Cate Blanchett’s Backyard’ and ‘A Flood Of Asylum Seekers Are Ruining The Holidays Of Brits In Greece’.

The lead photo for the Mail’s latest expose is, of course, the pouty young Australian girl taking a selfie in her bikini.

Meanwhile, closer to home, a Melbourne-based animal welfare group, Australia for Dolphins has been trying to raise awareness about the same treatment of dolphins in our own backyard.

At Coffs Harbour on the NSW north coast, a small tourist park is holding six dolphins in small, chlorinated pools. Visitors to Dolphin Marine Magic who are prepared to cough up more than $400 are able to ride the dolphins and get a kiss.

The phone number of the park is, literally, 1300 KISSES.

AFD launched a petition last year calling on the NSW government to force the tourist park to follow the law – NSW regulations clearly state that interactions with animals like dolphins must be kept to a minimum.

“Within a few weeks [of the Bali petition starting]it had gone viral. The story attracted a huge amount of media attention and the conditions the dolphins are kept in were heavily criticised,” says Jordan Sosnowski, AFD’s Director of Advocacy and an Associate Fellow at the Oxford Centre for Animal Ethics.

You can read Sosnowski’s opinion piece for New Matilda here.

“Yes, the pool is tiny, and yes, the water is chlorinated and the dolphins are made to give members of the public ‘kisses’. This is all absolutely terrible. But it’s not an issue unique to Bali.

“The same abuses occur in our very own backyard, almost completely under the radar.

“If we’re laying blame then we should also be prepared to consider our own track record.”

That track record bears a striking resemblance to Bali’s.

Along with Sea World on the Gold Coast, Dolphin Marine Magic (DMM) is the only other park in Australia that keeps dolphins in captivity. In a phone interview with New Matilda, CEO of the park, Paige Sinclair rejected any suggestion animals at her park were mistreated.

“We’re being victimised by a group of women [from Australia for Dolphins]who, really, they just don’t like [dolphins in captivity],” Ms Sinclair said.

“Fine, I get that, but we meet all the regulations. We love our animals, they’re very precious to us. If we didn’t meet the standards we wouldn’t have a license.

“[Our animals] are not doing circus tricks. [The visitors] are not getting on an animal. They’re not towed, they’re pushed…. They don’t grab onto any of the fins. The animals push a foot or a hand.”

But multiple videos available online – some of them created by Dolphin Marine Magic to promote the park – tell a vastly different story.

They show dolphins and seals towing tourists around the park, including numerous videos of what Dolphin Marine Magic calls a “belly ride” – tourists wrap themselves around the dolphin’s belly while it swims on its back and drags the tourist around the pool.

One promotional video created by DMM shows a woman being towed around a pool on the back of a seal. The videos also show dolphins and seals performing numerous circus-style tricks, along with staff kissing the animals, and swinging them around.

Ms Sinclair said most of the practices depicted in the videos had ceased in the last few years, however she acknowledged DMM’s Facebook page was advertising ‘belly rides’ on dolphins as recently as June this year, but suggested it was a ride “with” not “on” dolphins. 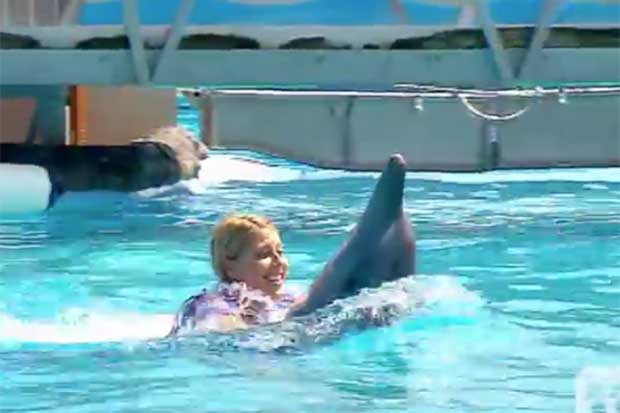 Ms Sinclair pointed to the boost to Coffs Harbour’s economy – the park employs at least 50 local people, and turns over more than $4 million in revenue a year, although it only generated a modest profit of less than $40,000 last year.

Ms Sinclair also says the animals need to work to keep them stimulated.

“These animals actually need some work to do – they cannot be doing nothing,” she said. “Interaction with people and show times, if they didn’t do that they would be bored.

“A lot of people don’t believe in [captivity]. But these animals can’t go back [into the wild]. To build a sea sanctuary would cost millions of dollars, and you’ve got to find a suitable place. Then someone still has to feed them and look after them.

“There’s [has to be a]compromise, and something I think we do really well is we engage and connect people with these animals, so that they do the right thing in the wild.”

The claim that dolphins bred in captivity can never be returned to the wild is contested – Australia for Dolphins pointed New Matilda to this website as an example.

Even so, two of DMM’s six dolphins – Bucky and Calamity – do come from the wild. Both were rescued after suffering an injury, and in Bucky’s case, that rescue occurred in 1970. He’s been ‘kissing’ tourists and performing for them for almost half a century. 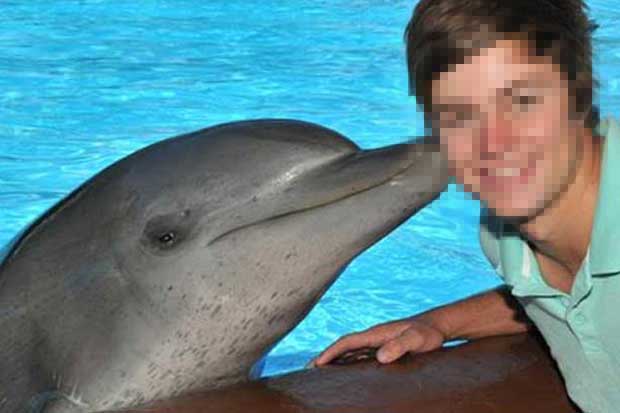 Bucky was recently treated for cancer and having gone into remission, he’s back performing for visitors.

“[Bucky’s] in semi-retirement. He doesn’t do every show,” Ms Sinclair said.

Jordan Sosnowski from Australia for Dolphins said there was no excuse for Dolphin Marine Magic to not meet minimum animal welfare standards.

She said AFD was frustrated that Australians could react so strongly to the welfare of dolphins in Bali, and yet ignore it in Australia.

Ms Sosnowski pointed to the website Trip Advisor to highlight the substantial difference between the Australian reaction to parks in Indonesia, and the reaction to Dolphin Marine Magic.

“Of the Bali attraction, one Sydney-sider on TripAdvisor writes: ‘Coming from Australia where we have the pleasure to see dolphins in the wild this just broke my heart to see. Please do not pay money to support this cruel place. Even the water has chlorine in it, do they not realise how bad that is for their eyes. Left crying….’”

The site is littered with comments from Australians condemning the captivity of the dolphins. and one of the parks singled out in the petition had a rating a fortnight ago of 1.5 stars.

DMM and Australia for Dolphins are currently engaged in a battle over the size of the pools which house the dolphins in Coffs Harbour – DMM was recently issued a variation to their license to allow them to keep six dolphins, when the legislation states they should have a maximum of five.

“All four of the enclosures are smaller than even the minimum legal requirements,” said Ms Sosnowski.

“DMM privately admits this in its annual reports, and has applied to the regulator for ‘legal variations’ so it can operate with pools that don’t meet the standards.

“The upshot is that the dolphins and seals are crammed into spaces which don’t meet Australian regulations, even though the regulations are 20 years old and lax to begin with.

“How is this any different to Bali?”

New Matilda will be returning to the dispute over the sizes of the dolphin pools in Coffs Harbour in coming editions.

In the meantime, we’ve produced a graphic which compares the pools in Australia with one of those in Indonesia that is the focus of the Bali petitions.

You can get more information on the work of Australia for Dolphins here.

And you can sign New Matilda’s petition demanding the NSW Government enforce the legislation related to the proper keeping of marine mammals here.

* New Matilda is an independent Australian media outlet. This sort of reporting is time-consuming, and expensive. If you want to support it, please consider subscribing or donating.