By the time Michele O’Neil took the stage on the second day of Labor’s national conference last weekend, she must have known her words could not move hands.

Delegates were about to vote on a motion to amend Labor’s policy platform so that it explicitly opposed boat turn backs, the hardline refugee policy deployed by the Abbott government which, in the week previous, had drawn support from Opposition Leader Bill Shorten as well as the Shadow Minister for Immigration Richard Marles.

Across the political landscape the number of voices opposing the policy had dropped to almost zero, with groups like the Refugee Council pushed out of the conversation. The media took the near perfect bipartisan consensus as a sign the question was settled.

All week, Marles and Shorten fielded questions about backflips and backdowns, with shock jocks only curious to know why they had not changed track sooner. It was largely taken for granted that towing boatloads of refugees out to sea was a good thing.

By the time Labor came to debate the policy itself, the numbers had been counted and the outcome forgone – when a show of hands was called the amendment was voted down.

Speakers in favour of the motion were subdued and unconvincing. They spoke about the Labor party a lot. Murray Watt, who recently rolled Senator Jan McLucas to take the top spot on the Queensland ballot at the next federal election, spent the first two minutes and 15 seconds of his speech talking about his own party. His whole address lasted for less than 6 minutes. 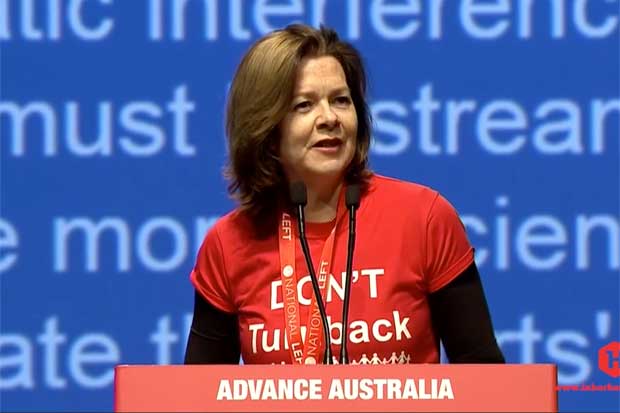 Before the ‘debate’, the Left faction had caucused, with the emotional meeting failing to reach a consensus. Sources said Michele O’Neil had been the most effective speaker putting the case against turn backs, and for the amendment.

When she reached the podium to address the party as a whole she didn’t disappoint.

“I’m the leader of the textile, clothing and footwear union,” she began.

“And many thousands of the members of my union came to this country seeking asylum.

“They came as refugees. They wanted a better life. Some of theme came on dangerous boat journeys. Some of them came when an effective regional process was put in place to bring them here. Many of them remember the horror of those journeys and speak of it often.

Not for the last time, the delegates applauded.

As she was said to have done in caucus, O’Neil stood out. Part of the reason was the power of her delivery. But equally important was the content of her message: she tackled policy questions head on while adopting the broad moral language and positive vision Labor has struggled to deliver in the course of this 14-year debate.

O’Neil says the issue of asylum seeker and refugee rights has long been close to her heart.

“As a child and a teenager I was active in issues to do with anti-apartheid and land rights and anti-racism campaigns. So I’ve always had a very strong view about the importance of having a global view,” she told New Matilda in a subsequent interview this week.

As the opening to her address at the Labor conference suggested, she sees an intersection between the treatment of refugees and the interests of her union members (she’s now been their organisation’s Secretary for seven years).

“I think that unionism is about collective power and justice, and about rights, so these things are really interconnected,” O’Neil says.

She’s not the only one who thinks so. The ACTU has adopted a firmly pro-refugee stance in recent years, and President Ged Kearney was one of the voices advocating for a change to Labor’s policy at its conference.

But as the unions have adopted a more humane position, the inverse has occurred in government policy.

O’Neil is under no illusion that these policies, and the rhetoric in which they come cloaked, remain popular.

“One of the things that unions are good at is discussing issues with their members and educating people about what’s possible,” she says. “And I think that on the issue of asylum seekers and refugees as a movement – and of course there are exceptions to this and some unions have done fantastic work – but as a movement I think we have not done enough hard work with our rank and file membership to expose the myths, to expose the reality of what is often a thinly veiled campaign of racism and fear and xenophobia, and to actually help ordinary workers to understand that we really do have nothing to fear in terms of being a country that is generous to people seeking asylum.”

This is the kind of campaign that would be needed to bring sustainable change to refugee policies in Australia, and asylum seeker and refugee groups at the Labor conference expressed frustration that the party would not be using its considerable platform to help shift the conversation.

So too would O’Neil.

“We failed to take the lead in terms of changing hard views,” she told the Labor conference, to rising applause. “We failed to persuade people that we are a generous county that can afford to bring those seeking asylum here and that we having nothing to fear from that.

“What we failed to do is, I think, to show true leadership. Because great leaders take on hard issues and move public opinion.”

At this point, the clapping escalated to cheers.

Though a minority, a sizable number of Australians remain impatient for this kind of leadership. The grandmothers who visit detention centres, the lawyers who advocate pro-bono, and the doctors who blow the whistle on malpractice will keep doing their steady work behind the scenes. But without contestation at the highest political level, Australia’s refugee policies will stay locked in to the logic of deterrence, a discourse that requires attacks at all levels if it is to be shaken.

With Labor further entrenching that way of thinking at its party conference, the voices of people like Michele O’Neil will become all the more important to those hoping for a better way.

Even after the result at last weekend’s conference, O’Neil sees a way back to this kind of policy making for Labor.

“I saw at the conference, and I’ve heard from the large number of people that have made contact with me since the conference, the extraordinary passion and strength of views among ordinary rank and file members of the party, members of our union, members of the community who are determined to try and ensure that Australia has a more humane and open policy to asylum seekers.

O’Neill may not have moved delegates to raise their hands in favour of the anti turn back amendment, but the deeper struggle for those advocating humane refugee policies is to move the public’s perception of a group they have been told fear for over 14 years.

Beyond the question of deaths at sea, it’s this instinct that still rules the politics of asylum in Australia. It’s one that will take many more Michele O’Neill’s to slice through.