Christopher Pyne may have been derided by former Prime Minister Julia Gillard as a ‘mincing poodle’, but he’s not one you could accuse of mincing words.

Unless you read the transcript of his appearance on 7:30 last night.

Pyne dropped by to promote his new book, a reflection on more than 20 years of love, life, and politics (we presume).

The Minister for Education hasn’t had the best time since rising to his current portfolio, and was visibly excited to be on television talking about something other than his failed attempt to deregulate the country’s university system.

Host Sabra Lane initially threw Pyne a bone, allowing the Minister to impart on viewers the profound lessons he learned while rising to a position where he was able to increase the price everyone else has to pay for theirs (more on that later).

But after a couple of show laps, Lane walked Pyne onto the big issues of the day, including the question of women’s representation in Parliament, one that has dogged the Abbott Government in particular.

Pyne started on a refreshingly honest note, pointing out his own party’s failure to improve women’s representation.

“It is a subject that we need to focus on as a party because the number of women representing the Liberal Party in the Senate, for example, has not increased, it's declined and we need to address that subject,” Pyne said. “We need to make it a lot easier for younger career-minded women to choose public life, to choose politics and to choose families at the same time with the support, if not of a husband or a spouse or a partner, of a network of people who can make that happen or we'll not get the very important input that women provide to cabinets, to Parliaments, to party rooms, which I think we have suffered in the last decade or so in not having enough women in our party room.”

As we all know, the Minister for Education isn’t just any old Fido. He’s a fixer, and with that in mind, Lane asked about solutions to the representation problem, including whether the Liberal party should adopt Labor’s quota system, something Liberal MP Sharman Stone has been calling for this morning.

He wasn’t quite done there.

“But of course, if merit isn't achieving the outcome that you want, then other measures need to be looked at to ensure that we are attracting women to Parliament, and not just women whose children have, for example, grown up and moved out of home or women that never chose to have children, both of whom are very welcome in politics. But what the Labor Party's been able to do is have women who have their children in Parliament.”

Let’s just pause there for a moment and get our heads around Pyne’s view, which seems to reject the idea that Australia is a well functioning meritocracy, while also rejecting measures to combat built-in discrimination. The facts according to Pyne are that:

Got that? Good. Here’s a flow chart in case you’re still a little confused. Why exactly Pyne opposes quotas was not made clear. Perhaps it’s a general attachment to his party’s core philosophy that people need to pull themselves up by their bootstraps without any assistance. Or maybe the Minister senses his party isn’t quite there on the issue and that it’s best to keep up public opposition. Or perhaps Pyne realises, as you suspect other members of the Coalition’s cabinet have, that affirmative action would be a bad career move for a man clearly already planning the sequel to his freshly printed auto-biography.

Labor’s introduction of quotas for preselection was a game changer in Australia, helping to massively increase the proportion of women in our Parliaments. In 1994 the party committed to pre-selecting women to 35 per cent of all winnable seats by 2002, bumping it up to a 40 in 2012.

“Between 1994 and 2010 [Labor’s] preselection of women candidates increased from 14.5 per cent to 35.6 per cent,” according to a Parliamentary research paper.

Here’s how that looked by 2014, in the Federal Parliament. 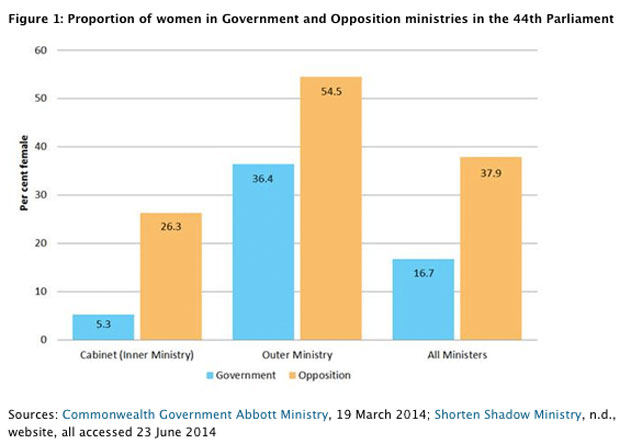 And here’s what has happened across the country. With that success in mind, Labor this week voted to boost the party’s female MPs to 50 per cent by 2025.

Abbott’s Cabinet has just two women, to 17 men. Among the men are the following intellectual heavy weights and figures of public adoration; Joe Hockey, Warren Truss, Eric Abetz, Bruce Billson, Peter Dutton, Kevin Andrews, Barnaby Joyce, and, of course Christopher Pyne. Let’s not forget the Minister for Women in there either, our PM Tony Abbott of ‘international misogyny speech fame’. Here it is in case you missed it.

If meritocracy does ever take hold in the Coalition party room, let alone affirmative action, you’d have to think the already improbable fact these men have risen to such heights would be quickly reversed.

Reflecting on his own achievements, and the subjects broached in his book, Pyne had philosophical gems to share.

“I wanted to write a book to try and explain why public service is an inherent good in itself, but also to explain the allure of politics, and I think in the end, the answer is that what's alluring about public life is the chance to do things,” he said.

“And to do things, you have to be in government, and being in government, being a cabinet minister is really the pinnacle of being to able to get things done.”

Once gain, we’re going to have to go back to the dot points on that one. After more than 20 years at the centre of Australian political life Pyne has deduced that:

• People like to ‘do things’
• This explains why people are drawn to political life, because there they can ‘do things’
• But if you really want to ‘do things’ you need to be in government
• The top of the government, both in terms of its own hierarchy as well as the hierarchy of ‘thing doing’, is the cabinet.

Pyne concedes the Liberal party is missing talented input because of its gender imbalance. His own form as a minister, and his flailing attempt to avoid the conclusion that affirmative action is necessary to combat the chronic underrepresentation of women in his party, are the strongest possible arguments he could ever hope to make to implement the policy immediately.

* If you liked this story, please consider subscribing. New Matilda is a small, independent Australian publication and relies almost entirely on subscriptions for its survival. You can DONATE a smaller amount here, or just share our story on social media.