Australia’s tight gun ownership laws remain overwhelmingly popular, with a new poll finding close to half of those asked would like even tighter restrictions to apply.

In a poll of over 1,700 people, Essential Research found 40 per cent thought Australia’s gun ownership laws were “about right”, while a further 45 per cent believed they were “not strong enough”.

The results come after conservative pro-gun group the National Rifle Association stirred the hornet’s nest last week, attacking Australia’s laws and denouncing the policy of gun buybacks, which saw up to a million guns taken out of public hands after the 1996 mass shooting.

“The Australian people paid a massive price in liberty,” the NRA piece said. “Their reward? At best, an unexamined resolution that things were somehow better now. For those who became victims, or who simply examined the situation with open eyes, it was rather clear that they were not.”

If the NRA is to be believed, about 94 per cent of Australians currently have their eyes closed.

Just 6 per cent of those surveyed responded that current laws are too strong, while 10 per cent said they didn’t know. 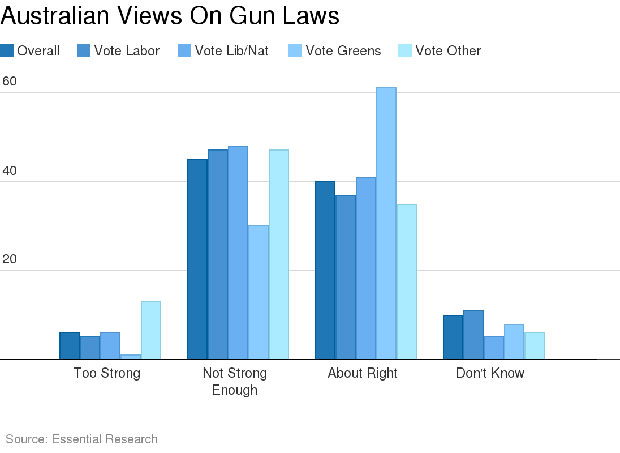 According to Essential Research: “Those most likely to think the gun laws are not strong enough were aged 55+ (64 per cent) and live in NSW (52 per cent). Polling on gun laws remains sparse in Australia, with polling groups and policy experts telling New Matilda last week that the issue barely registered on the political agenda and therefore tended to get ignored by number crunchers.

While Australia’s gun homicide rate remains a fraction of that in the US, the number of guns in the country has steadily increased in recent years, largely off the back of imports from the United States.