Long before the Senate resolved to interrogate the operations of the ‘Regional Processing Centre’ re-established on the island by the Gillard Government in 2012, the dysfunction and abuses occurring there had been made clear by leaks to the media, a disturbing trickle of information found to be based on credible testimony by the Moss review.

There have been surprises. The revelation that Wilson Security staff spied on Senator Sarah Hanson-Young, for instance, as well as testimony that guards recorded sex with refugees and propagated the footage.

But the large number of child abuse and sexual assault allegations could not have honestly caught any observer by surprise, certainly not the Department of Immigration, who has been kept abreast of the incidents and the data as they have been recorded.

As Leonard Cohen put it, everybody knows. Everybody knows Nauru is a scorching and near lawless island where a group of over 1,000 refugees cannot be neatly integrated into a population of 10,000, barely coping with their country’s history of colonial and corporate plundering, environmental degradation, and ongoing corruption.

This is a place where the delivery of basic services – water, clothes, adequate shelter – is outrageously difficult, and the promise of real security out of the question (Transfield’s Kate Munnings was asked yesterday if she could guarantee the safety of asylum seekers detained in the centre her company runs. She declined to answer the question).

As the evidence has been produced, the service providers contracted to run the centre and the Department of Immigration have played a tedious game of pass the parcel. They’ve given detailed descriptions of procedures and processes, and steadfastly stood by their practices and their staff. And still, no-one will take responsibility for what has happened – what continues to happen – on Nauru.

When Transfield Services, the company handed the $1.2 billion contract to run offshore processing, came before the Inquiry yesterday, Senator Sarah Hanson-Young had had enough. 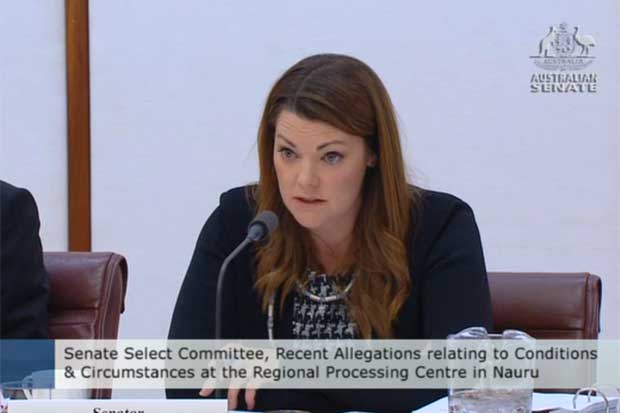 “You’re not getting away with blaming other contractors for the appalling situation inside the Nauru detention centre. I’m not going to have it and I don’t think anyone on the Committee is going to cop that,” the Greens Senator fumed.

Later in the afternoon, as senior members of the Department of Immigration took their seats, the source of this frustration was made clear.

Labor Senator Kim Carr, who has shifted seamlessly in character between a gruff real-talking enforcer and a chortling provocateur during the Inquiry, finally gave utterance to the question hanging over every gritty fact unearthed by whistleblowing staff and internal contractor records.

“For the duty of care [on Nauru], who’s responsible,” he asked Department Secretary Michael Pezzullo.

“The government of Nauru is ultimately responsible in the exercise of its jurisdiction,” the Secretary replied in a neat tautology.

When the music stops, the parcel conveniently comes to rest with a country where there is no free press, an absence of real civil rights, and an increasingly restrained political opposition.

Whose fault is that?

As the Secretary continued, he was interrupted by Carr.

“I’m not asking you to defend the position. I’m just asking what’s your assessment. We’re in the process of writing a report. That’s the official view, that it’s not your responsibility. It’s the government of Nauru’s responsibility,” he said.

Pezzullo reiterated his view, but was again interrupted by Carr. The inquiry has been pinned down in detail for much of the time (when is a tent a marquee and not a tent?) but in five words the Senator exposed the forest from the trees.

“Who’s got the moral responsibility?”

“Well if you want morality I…”

The Secretary shrugged, and lifted his hands.

Carr cut in, right hand bopping up and down by his side, now appearing slightly agitated: “What is it? What is it?”

He clasped his hands and looked around the room. Inquiry Chair Alex Gallacher mumbled into his microphone and the hearing moved on.

On one hand, this Inquiry is intended to find out if the companies like Transfield, and organisations like the Department of Immigration have done everything in their power to help things run smoothly on the island. In that regard, they’re very likely to be found wanting. But the reason Pezzullo couldn’t answer Carr’s question was because it hit a nerve that goes beyond the gut wrenching particulars of Nauru, and brings every case of abuse, sexual assault, and failed care back to the bigger picture.

Asserting that Nauru is ultimately responsible for handling the problems thrown up by the immigration detention centre hastily re-established on its tiny state is equivalent to saying there is no moral responsibility to attend to them at all.

Nauru cannot do the job. Evidence given by Geoffrey Eames, the country’s former High Court chief justice barred from returning to the island in a purge of its judiciary in 2014, made that abundantly clear earlier in the day.

It does not have the resources, the independent judiciary and police, let alone the political will to attend to the allegations arising from the detention centre.

They will not be resolved.

But offshore processing has never been about resolving problems. It’s about outsourcing them.

Just as responsibility for detention centres in Australia was outsourced to private firms in the 90s, the entire policy has now been pushed offshore.

There’s something telling about the Abbott government’s boat ‘push-backs’, an apt metaphor for the broader approach being taken by Australia to those who flee persecution by sea. We’ve pushed people onto Nauru and Manus, pushed them back to the high seas off the coast of Java, and pushed them into the death camps of Thailand. The Coalition has pushed them to the political foreground, then out of mind and out of sight.

Changing the way the processing and resettlement of refugees on Nauru is administered is a worthwhile exercise, one that may even save lives in the future, and will certainly keep pressure on the companies profiting from the practice.

In reality, Australia continues to exert massive control over what happens there, and probing the details will increase the likelihood the people detained will be treated humanely.

But the answer to Senator Kim Carr’s question, to the central question of this Inquiry, is clearly not ‘Nauru’.

The moral responsibility for what happens to the people we have pushed into a precarious future on Nauru is ours. Neither private contractor nor people smuggler nor tropical island can be paid to take it off our hands.