My friends. I am proud to be a voice for North Queensland today. We all have a voice: Notwithstanding our choice to use it or not. Notwithstanding the best efforts of those who would render us silent. We have a voice – not a voice of hatred, violence, and extremism – but a voice of warning, defiance, and of hope. Our voice does not go unchallenged but that is the beauty and appeal of the free and open democratic society our voice speaks out to defend.

Long before he became President of the United States, Ronald Reagan was a voice for the American people. At a Republican convention in 1964, he said: “There’s no argument over the choice between peace and war, but there’s only one guaranteed way you can have peace — and you can have it in the next second — surrender.”

TRANSLATION: The people at Toastmasters told me that I should always start a speech by quoting someone famous from history. Ronald Reagan is famous, and he is from history. Plus he loved peace. Although he went to war quite a bit. We should invade Indonesia.

Our voice says: “We will not surrender.” We will not sit idly by and watch the Australian culture and the Australian lifestyle that we love and that is envied around the world be surrendered and handed over to those who hate us for who we are and what we stand for.

TRANSLATION: We are all under threat and we are going to die. Because Muslims.

When Ronald Reagan spoke those words, he warned against the threat of Soviet Russia and those words apply equally now to the threat of Islamic extremism and its complicit defenders. Reagan said: “Every lesson of history tells us that the greater risk lies in appeasement” and yet that is the political and social environment that confronts us today – appeasement.

TRANSLATION: When the United States invaded Russia and killed all the Communanists, they saved the world from the threat of Communanism. We should do that to stop the Islamanists.

When I accepted the invitation to be a voice here today, I was disappointed (but not entirely surprised) by a tidal wave of hyperventilation and confected outrage on social media, in the mainstream media, and from capital city commentators.  Labor’s Shadow Minister for Immigration, Richard Marles said today’s rally was synonymous with racism.

TRANSLATION: If you grow up in a city, you understand nothing about racism and Islam. You have to grow up in an isolated pocket of Far North Queensland where they all live to understand these things.

Our State Labor Member for Mackay described my comments in accepting your invitation to speak as appalling, shameful, ignorant, and hateful. In doing so, she has reflected on you and your fellow like-minded citizens. A petition urged the Prime minister to prevent me from even attending today. The apologists of the left, the do-gooders, and the politically correct crowd said I should not address you because you were a crowd of: racists, bigots, Islamophobes, extremists, white supremicists, skinheads, and Nazis.

TRANSLATION: You are a crowd of racists, bigots, Islamophobes, extremists, white supremacists, skinheads, and Nazis. That’s what I like most about you.

But I look out at the crowd and that’s not what I see. I see Mums and Dads who love their country – the Australian culture and the Australian lifestyle. I see everyday hard-working families who want their kids to enjoy the same freedoms that were enjoyed by the generations that came before them.

TRANSLATION: I think that yummy mummy in the front row is giving me the stink-eye. 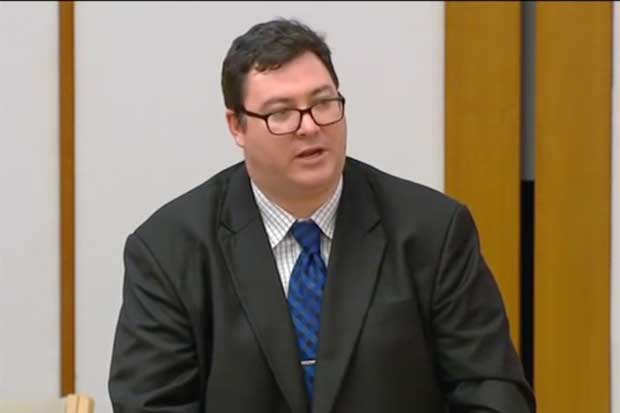 Some of the freedoms Australians hold most dear are freedom of speech and freedom of religion. In this country, I am proud of the fact that someone who has a particular belief can hold that view without fear of intimidation. They can practice their faith – whether they are Christian, Buddhist, or Muslim – at a church, a temple, or a mosque – without fear of intimidation. And the full force of the law can, and should, come down on anyone who does try to intimidate them.

Likewise, we have a freedom to criticise. While it is not my cup of tea to criticise religions, I see that people criticise Christianity every day without fear of retribution, violence, or being called a Christophobe or a racist.

TRANSLATION: It is my cup of tea to criticise religions. And by ‘religions’ I mean Islam.

In fact, we have seen many examples in the past year alone of Christians being slaughtered for no reason other than the fact that they are Christian. But in this country, that should not be tolerated.

TRANSLATION: We’ve never seen any Christians slaughtered in Australia because they’re Christians. And we should never tolerate that.

In this country, we also enjoy the right to peaceful assembly. We all have the right to be here today, protesting in a peaceful way against the dangers of radical Islam and the culture of appeasement that allows radical extremism to fester. That culture of appeasement to radical Islam dictated that I should not speak here today for fear of giving you credibility – as if your voice would otherwise have no value.

TRANSLATION: People who arrive at protests with swastikas and Neo-Nazi symbols are not radical extremists.

Last month marked the 800th anniversary of the Magna Carta – the charter agreed to by King John of England at Runnymede on the 15th of June 1215. The sentiments of that document underpin the free and democratic western societies that have delivered the most modern, free, and most appealing societies in the world. But we, as beneficiaries of that society must be ever-vigilant against threats – both internal and external to our freedom and democracy.

TRANSLATION: Magna Carta, blah, blah, blah. Toastmasters suggested I mention it because it adds gravitas to my speech. Speaking of Toastmasters, if I don’t hurry up and finish, the free buffet just behind the ymmy mummy might be all gone.

We must not ignore the fact that there is another world view. We cannot stick our heads in the sand and pretend there is not an alternate world view that is opposed to democracy and freedom. And we must not confuse that ideology with religion.

TRANSLATION: Other people in other parts of the world think other things. This is fucking outrageous.

Islamism is a political system whereby everything that happens must fit under the laws of radical Islam. It is not just people in Iraq, Lebanon, or Syria that subscribe to this world view. This is no longer something that is ‘over there’; it’s not a threat that only exists on foreign shores; it’s a threat that is within our midst as well. There are those within our shores who sympathise and even support and actively recruit for Islamic State. These people have declared war on Western civilisations and we would be foolishly naïve to think we are not at war.

TRANSLATION: The Muslims have taken over all the Mosques in Australia. This must stop.

The spread of repressive ideologies under our very noses right here in our own country has already begun.

TRANSLATION: I wonder how many people in the crowd are members of the LNP?

I refer to the slow spread of a Sharia-style dispensation of justice which is quietly executed in Australian mosques on a daily basis. It’s a form of ‘justice’ that perpetuates the oppression and abuse of women and yet we don’t dare speak of it because we will be instantly attacked as “racists”. It’s sad to see that those who wish to take a stand against the tyranny of Islamic extremism, the ideals of Islamism, are accused of being racist, bigoted or intolerant.

TRANSLATION: Sharia Law is everywhere. It’s even in our food and that doesn’t taste like justice to me… I should have eaten before I started this fucking speech. It’s so long.

TRANSLATION: I had to write this speech quickly last night, because I thought Saturday was Friday. I hope no-one notices.

This comes from someone defending extremists who want to kill non-Muslims, throw gay people off tall buildings, and deny women the most basic of human rights. Reclaim Australia is about none of those things and, in fact, opposes exactly those things. Rather ironically, all the traits these so-called “anti-racism” protestors complain about lie at the very heart of the extremists they protect – the very traits Reclaim Australia is rallying against.

TRANSLATION: I don’t agree with killing poofs, but I’ll be damned if I’ll let them marry. Wow, look at the tits on the girl in the front row.

Certainly, as with any movement, there are fringe dwellers who seek to pervert the intentions of others, such as the Neo-Nazi skinheads that turned up in rallies in capital cities. Neo-Nazi skinheads are fellow travellers of the extreme Islamic movement because they share so many of the same hate-filled values. Nazi ideology, like Islamism (Political Islam), offers no right to freedom of speech, no right to association, hatred of the Jewish people and a hatred of democracy in general.

It is extremism of any kind that we must guard against. It is ordinary folk, like those of us here today, who must speak up.

TRANSLATION: I earn four times the average salary, plus perks. A man in a tie drove me here today in a ComCar. I have so fucking made it.

It is we who must not give in to the bullying and the intimidation and speak without fear to our friends and family about our freedoms, our culture, our lifestyle, and the threat radical extremism brings to those freedoms.

TRANSLATION: The Muslims who make up 2 percent of the population are taking over. We should feel under threat.

We must refuse to abandon thousands of years of civilisation for the sake of political correctness.

TRANSLATION: Australia was founded thousands of years ago by my ancestors. Prior to that, it was nothing but bush.

I would like to conclude by returning to Ronald Reagan’s historic speech and applying it to the defence of Western Civilisation.

TRANSLATION: Western Civilisation, particularly in the Middle East, is under threat.

He said: “We’ll preserve for our children this – the last best hope of man on earth – or we’ll sentence them to take the last step into a thousand years of darkness.”

TRANSLATION: Ronald Reagan said that in 1964, 50 years ago. And he was right, Armageddon was right around the corner and it still is. We’re all going to die. Trust no-one.

TRANSLATION: It's been 10 minutes since I tweeted something provocative. I'm starting to feel irrelevant.

* If you liked what you read, please consider subscribing to support independent media. You can click on the graphic below to subscribe, or you can donate a smaller amount here.