For a very long time, Aboriginal people were given very little chance to reply to racist comments, in a media saturated by non-Indigenous voices. It was just one of the reasons behind the emergence of an Aboriginal media, which thrives in some sections, but is nonetheless, constantly endangered.

The importance of Aboriginal media was demonstrated this week, when Gameroi journalist Danny Teece Johnson posed a vital question in a piece for NITV National News.

His target was former Labor MP Gary Johns – a frequent and perhaps unwelcome commentator on Aboriginal affairs – and right-wing shock jock Andrew Bolt, known for his obsession with the identity of light-skinned Aboriginal people, and for his campaign to deprive the Stolen Generations of true justice and.

Johns had appeared on The Bolt Show, which screens on Channel Ten every Sunday morning, where he had used an already inaccurate discussion on constitutional reform to highlight his offensive, disgusting, overtly racist views about Aboriginal women.

According to Johns: “Look, a lot of poor women in this country, a large proportion of whom are Aboriginal, are used as cash cows, right? They are kept pregnant and producing children for the cash. Now, that has to stop."

Johns prefaced his offensive comments by quoting the disproportionately high rates of family violence perpetuated against Aboriginal women. But his comments were in itself a form of emotional abuse, which is too often inflicted on Aboriginal women. Only this time, instead of coming from those closest, it came in the form of a privileged white man with a media platform that far outweighs his intellect.

And where did his comments come from? According to Aboriginal academic Prof Marcia Langton, it was from a piece in The Monthly she wrote on the new Healthy Welfare Card, a proposal of mining magnate and saviour of blackfellas, in the eyes of his public relations team at least, Andrew Twiggy Forrest.

Prof Langton took to Twitter to claim an anecdote in her piece had been misinterpreted by Johns. She had written “social security entitlements for single parents are a rich playground for male welfare ‘gamers’ across the country, regardless of ethnic or cultural background”.

How Johns twisted this comment into a sick tirade against Aboriginal women and their reproductive choices, continuing the historical legacy of demonising and demoralising them, is indicative of a cancerous strain of the mainstream media intent on stripping Aboriginal communities of their humanity.

It also demonstrates how men like Johns will take anything out of context in order to make sweeping, broad statements that defame Aboriginal women, in order to suit their own agenda.

The fact Prof Langton was using an anecdote of this sort to advocate for a controversial piece of welfare reform based on the recommendations of Forrest is another matter entirely.

As the national media finally turns its attention to family violence, the majority of Aboriginal women are again deprived of their voice, they become docile caricatures whom things are ‘done’ to. And there is very little right of reply. Which is where the importance of Aboriginal and independent media comes in.

Welling up in frustration, Danny Teece Johnson asked his NITV audience on Tuesday night: “Imagine if NITV had a TV show where a panel of three Aboriginal commentators spent 30 minutes every Sunday morning demonising white Australians?

“We’d be off the air quicker than you can say treaty.”

Which is true, although I think a majority of Australians find the idea of ‘treaty’ just as unpalatable.

Teece Johnson then went on to compare Johns’ comments to the recent furore over Zaky Mallah’s appearance on ABC Q&A, which sparked outrage from the Abbott government and resulted in a review.

Teece Johnson said on NITV News “so while Bolt and his all-Anglo panel take turns whacking their Aboriginal piñata, we ask whether a major commercial network should provide a platform for these types of attacks on minority groups.

“… Andrew Bolt has built a career on his inflammatory style and unashamedly conservative agenda,” he said. “But as the federal government comes down hard on ABC’s Q&A…. over questions of editorial ethics, the Bolt report remains a protected series. Surely a prime time discussion that fuels racist stereotypes and blames the victim, is potentially more damaging to Australia’s First Peoples than Zaky Mallah’s brief appearance on Q&A to Australia’s war on terror.” 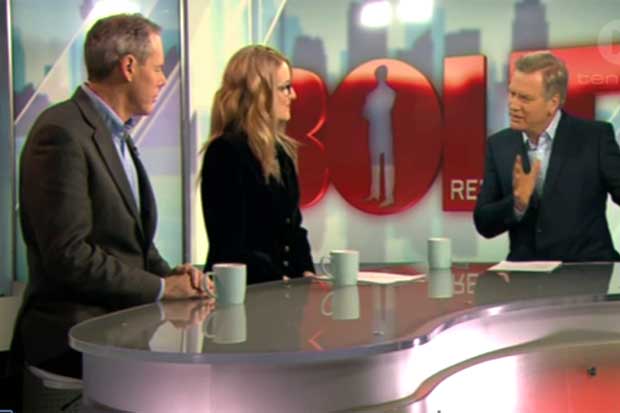 “Gary Johns made important points in a debate. They were in no way racist, particularly given that he specifically noted he was talking of poor people, both Aboriginal people and non-Aboriginal,” Bolt told NITV.

“Stop playing the outrage game and engage with the real issues that Gary is so passionate about – the deadly welfare culture that keeps poor people poor.

Which demonstrates exactly why the views of Johns and Bolt are so dangerous, and the failure by white Australia to be collectively outraged as a nation, is even more insidious.

He wouldn’t know a racist if it was staring in front of him in the mirror every morning.

Why do we let men like Bolt and Johns continue to parade their disgusting, bigoted views on mainstream television? What would happen if Aboriginal media actually had the budget to comment on the streams of rubbish produced by the pens of people like Bolt?

Instead, the Abbott government treats him like a protected species.

We even have national debates about amending legislation designed to protect minorities when he is called out on his shoddy journalism.

Aboriginal women shouldn’t be made to feel ashamed for having children, for wanting what so many other Australian women want. They should not be vilified as 'cows' who do not respect their children, just as all Aboriginal men shouldn’t be demonsied as child abusers.

If Aboriginal journalists produced the same nonsense as Johns and Bolt we would be rightly called out on it. But we don’t. Because we know about the consequences of words. We’ve seen it in policies like the NT intervention, how lies about Aboriginal men, women and children can lead to disgusting discriminatory policies that are condemned internationally.

Let’s hope one day people like Bolt and Johns feel the extent of those consequences too.

* The comments function for this story has been turned off, because of consistently defamatory comments.