It’s been 30 years since Greenpeace’s Rainbow Warrior was bombed in Auckland Harbour, but the ship’s captain, Peter Willcox, remains as determined as ever to fight for the environment.

Just two years ago, Willcox was one of the ‘Arctic 30’ detained for two months over his role in a protest against Russian plans to drill for Arctic oil.

On the 30th anniversary of the bombing of the Rainbow Warrior, New Matilda spoke to Willcox about the long list of high-profile confrontations with authorities he’s wracked up over his lengthy career.

“Well, 1985 was the year that we were protesting nuclear testing in the Pacific. We had just come back to New Zealand from the Marshall Islands where we had moved islanders from their atoll because they’d been used as guinea pigs by the US government to test the affects of radioactive fall out,” he said.

“The US exploded a bomb that was 1,000 times more powerful than the ones they dropped on Hiroshima and Nagasaki, and then watched while the people suffered over generations.

“We were then planning to go to French Polynesia and protest their testing program, but the French decided to anticipate us and sent a rather large team of about 15 agents to New Zealand, where they managed to put outside the boat two bombs.

“The first blew a two by two metre hole in the side of the hull and the second one, which went off about a minute later, trapped our photographer Fernando Pereira in his cabin and killed him.” Since that time Willcox has shifted his attention to the climate crisis and he says the difference between nuclear testing – “a very real threat because if any [more]of those bombs had been released it would’ve been a terrible catastrophe” – and climate change “is that global warming is happening”.

“There’s no waiting for it to happen, it has begun,” he said.

“A quarter of a million people a year are dying, the global temperatures are going up and there’s going to be no turning back the clock; all we can try and do is mitigate the damages and that’s what we’re trying to do now.”

Willcox has been working for Greenpeace full time since 1981 and as an environmental activist since 1973, but he said the relationship between states and activists hasn’t improved much since the 1985 bombing.

“No, I wouldn’t say that it has changed, but I would say that as the affects of global warming become more accepted and more understood, more people will act and certainly the millions of acts of courage that we see going around the world today, whether they be Greenpeace or other groups, are what’s going to provide change,” he said.

“It’s unfortunate that the corporations that are driving the issue probably will never understand the damage they’re doing. But then corporations are set up to make money. It’s for us to tell them what to do with it.”

Unfortunately, Willcox said, the political process in the United States and a number of other countries “has been pretty well kidnapped by the large corporations”.

He said that a national politician, be they in the house or the Senate, receive around 80 per cent of their funds from corporate or private donations and “that means they don’t represent common people at all”.

This crunch between political integrity and “the biggest industry on the planet” has meant that “in the last four or five years, we have found our jobs getting increasingly difficult”.

“Myself and my crew were arrested in Russia two years ago and spent two months in jail,” Willcox said. 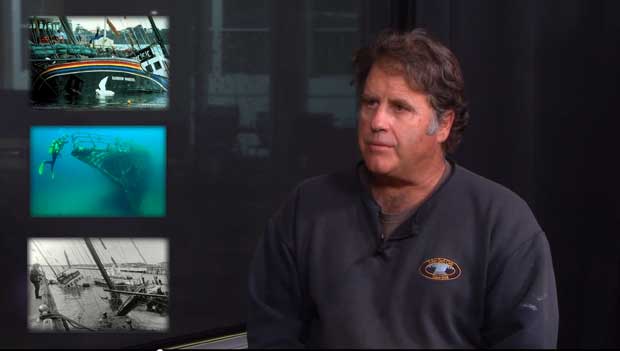 “In Peru, industry manufactured a serious backlash against us; in India they’re trying to shut down the office, and in Australia… there’s a debate about removing the tax-exempt status.”

New Matilda has previously reported on attempts by the Indian government of Narendra Modi to crush Greenpeace by repeatedly freezing its funds and refusing to allow activists to leave the country.

Ironically, as the Abbott government has been pursuing possible changes to environmental organisations’ tax-exempt status it was also, according to Willcox, trying to restrict the movement of activists.

“I came over in March into Fremantle trying to get in and we sat at anchor for three and a half weeks, which was very frustrating. But for me it’s just part of the work,” he said.

“They just threw up one road block after another and it took us a while to learn to react to it and deal with it.

“I mean it’s going to be happening because the fossil fuel industry’s not giving up without a fight. Absolutely not.”

This morning, Willcox led the Rainbow Warrior once again, but this time he was protesting against the Australian government which he said is “pushing the agenda of their fossil-fuel friends”.

“The Great Barrier Reef is the world’s largest living thing and in the past 30 years half the coral cover has gone. So it is fitting that the Rainbow Warrior is here on this day, as part of the global campaign to save the Reef and halt climate change,” he said.

The action comes as part of a week-long tour the ship, which is the third incarnation of the Rainbow Warrior, has been on since Monday. Activists on board confronted coal carriers anchored in the Great Barrier Reef Marine Park this morning holding up banners which said things like “this is a bush fire”, “this is a heat wave”, and in the case of one Vanuatuan activist, “this is a cyclone”. 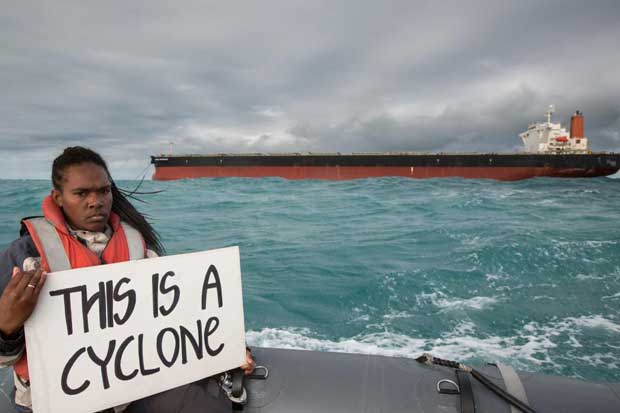 It’s the sort of stunt for which Willcox has been arrested before, like when “Mr Putin and the government felt so determined that their future lies in Arctic oil that they, I think, grossly overreacted to our presence”.

“Things were pretty grim. The Russian judicial system is very tough, 99.9 per cent of all people who are put in detention are found guilty at trial, and we were being charged for something that would get us a sentence of between 10 and 15 years.

“So, most days I didn’t believe that could ever happen to us, but then I didn’t believe they were going to throw us in jail and the first night we were on shore we were thrown in jail, so it was very anxious, it was stressful, and I’m not in a big hurry to do it again.”

But the veteran campaigner believes that the result of the Russian reaction “was that millions and millions of people all over the world began to realise and see what was going on and understand the dangers of drilling for oil in the high Arctic”.

“Much like the French blowing us up 30 years ago, the overreaction of a government was a huge blunder on their part, and as I said, made people aware of the problem,” Willcox said.

Thankfully for Willcox, this morning’s stand against the Australian government’s support for big coal passed without incident.